Not only does Liberty Bids have hidden reserves (they say it was a server problem that’s why I didn’t win when the timer ended with me being the only one up-on multiple items?). Seem to have shill bidding bots (yeah they suddenly kick on when no one knew there was an auction going on, lie about shipping items if they are over the value of bids purchased, no refunds and no items (Update from August 16th, they now added (re-added items today August 17th) any more except for the occasional mysterious items that become active after you visit or theirÂ  patriotic horseshoe crosses… They changed the price of bids. Yes, 100 bids now cost $1.00! That’s a $49 discount.

I have 44 bids left and they cost me $25- for 50 bids. I had free bids so I did not use any of my purchased bids Yet the owner, Cory Ritchey, makes a mockery of my request for a bid refund and even goes on to discount the price of bids.

Since this post was a draft yesterday they have now re-listed items, the same ones I bid on in the beginning. Walmart-Sams Club card valued at $25- The very same one that I was the last bidder on last time, NO WHERE does Liberty Bids state that they have a hidden reserve, notice the price now $18.81.

Liberty Bids pulls items off and then puts them back on whenever they see fit without refunding bids that were placed on them. Just so they can re-listÂ  whenever they want, and then finally release it to a real person once the price has been raked up by their shills and any real unfortunate people who find their Google ads. 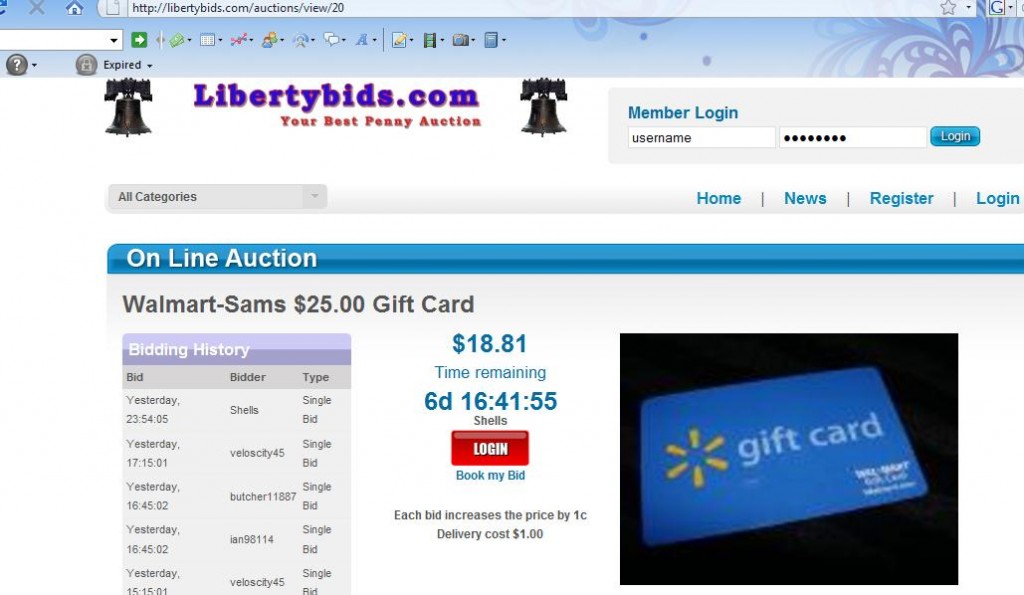 It seems pretty obvious by now that many of these penny auctions are not run by business people, only by people with no business plan and who cannot stand to lose a cent.

Liberty Bids, there’s nothing patriotic about RIPPING OFF the American people.

That’s why online pharmacies is becoming more pop over the last years. Well-known are remedies which are used to reduce inflammation caused by inflammation of the skeletal muscle etc. There were only few examples. Did somebody tell you about canadian generic Viagra? Maybe you yet know about the matter. Sexual dysfunction can be a result of a physical condition. Even when it has a physical cause, psychological problems can make the disorder worse. Sex drive problems are so commonly a product of how you feel that there is some to that “headache” saying after all.

Filed Under Legit or Not? Tagged With liberty bids
About the author: Connect with me on Google+
0 comments… add one