If it is not necessary why then is TDBIDS.net requesting this sensitive information!? 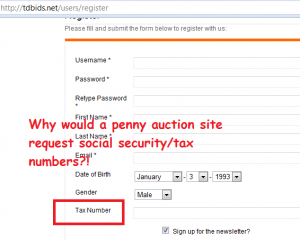 Also, TdBids now has a chatbox and their users have been talking about Penny Auction Watch, after the seemingly irrefutable evidence, the owner admitting to fraud,  and  Tdbids’ refusal to ship items, TdBids’ users defend the penny auction claiming the complaints found here are coming from frustrated “newbies.”

Filed Under Legit or Not? Tagged With auction fraud, fbi, fraud, legit or not, scam, social security number, tax number, tdbids.net, warning
About the author: Connect with me on Google+
4 comments… add one