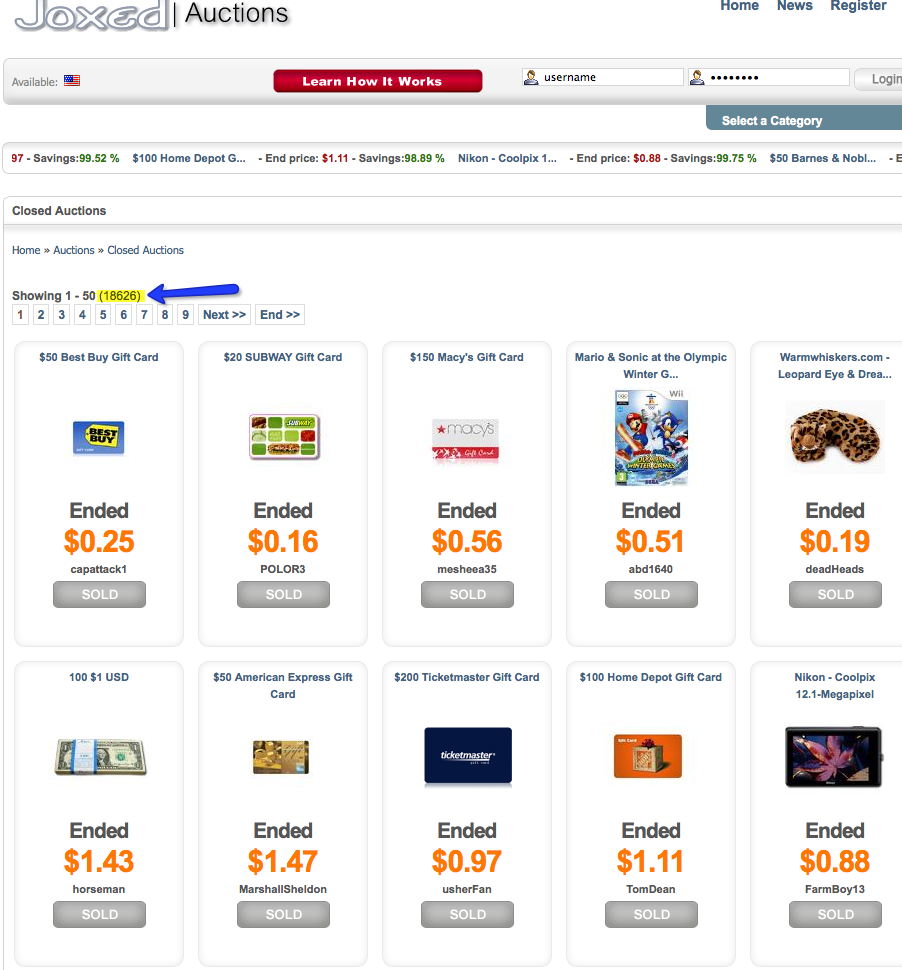 According to penny auction site Joxed.com, they show 18,626 ended auctions since December 30th, 2009.

But were the items on Joxed auctioned off to real people or bots? It is in our opinion that it appears they have autobidders (bots) shill bidding on their auctions.

Joxed.com has a very low Alexa traffic ranking of 1,874,360 and hundreds-thousands of bidders bidding on their many items, there are currently 5 active items right now on Joxed.

Bidders name’s & bidding patterns are very bot-like, take a look at some of the usernames of bidders on Joxed.com:

The domain registrant for Joxed.com is private, but Joxed LLC is indeed a registered corporation in good standing in Kansas.

We did a Google search for Joxed and found a user asking whether or not it was a scam on the scam.com forum.

Here’s what the user said:

“Joxed.com is another penny auction site. Has anyone every won anything on here? Most usernames on here seem to be computer generated with lots of numbers and letters that repeat or can’t be pronounced.  The stuff they offer versus their monthly page hits of 632 smells very fishy. They have more listings than swoopo and run 24 hours. I’ve seen a $1799 macbook air go for $1.54 not to mention a $3000 Nikon camera for $5.50. Sorry to say but every win looks like a website bot win. With real users getting taken in between start and ending bids.”

The owner of Joxed responded, here’s some of what he said, here’s the rest:

“For clarification purposes I will respond.

First, Joxed is averaging around 850,000 page views a day. I crack up laughing every time I see these ridiculous websites and their ‘traffic’ meters because they are ridiculous. My numbers are from Google Analytics and AWSTATS. We are crushing the numbers that BidCactus and Swoopo are ‘putting up.’ The fact of the matter is I know their numbers are false too. I shrug at a lot of that. I know our traffic crashed our servers (twice) causing several upgrades. You don’t do that with ‘bots.’

Interesting question. I am still trying to figure out what a bot is. I googled it to get a clearer definition, but nothing really made sense. We did purchase software that had the auction scripting, and we have also spent several thousand dollars hiring free lancers to completely customize it. I can say with absoluteness that we do not have ‘bots’. Random numbers and letters for names? Really, that’s what you are going to say is the indication for that? Holy cow my friend if that’s the case all poker sites are all bots, myspace are all spots, aol was all bots, yahoo is bots. In the reality of what you are suggesting every website ever created with users is all bots. It’s a ridiculous argument. We cannot control who creates names and to an extent what their names are. We will change names if they are offensive (which we have done.)

In the event you missed it, yes we have items go for far less than their actual value. Sure. That was really poor work on our end because we ran that auction in a non-prime time. That only assists you in your theory of ‘bots’ driving prices, right?

Here is the thing, we have received ZERO complaints about our site (except for the lag and crashed server.) ZERO. Not a singular complaint. Not one – from anyone. Why is this? Probably because we are not a scam. Want to know something interesting? Spent the morning talking to PayPal. They do this whole limitation thing (you can read all about it if you google it) because we were growing and growing and growing. I spoke with their specialist for about an hour. It took that long for them to remove any limits, if you ask PayPal which is widely considered to be top notch security they will tell you we are absolutely not a scam. How do they know? They have seen how we work, they have seen our insides.

How is that for credibility?

We were invited to the Mayor’s ball in the city we reside for the community work we do. Yes, there are scam sites out there I have no doubt. I feel horrible for those being scammed. It offends me that my company name is on this website, but that’s just a part of doing business.”

So Joxed.com’s owner insists that his penny auction is generating more traffic than BidCactus & Swoopo!? We don’t believe him. 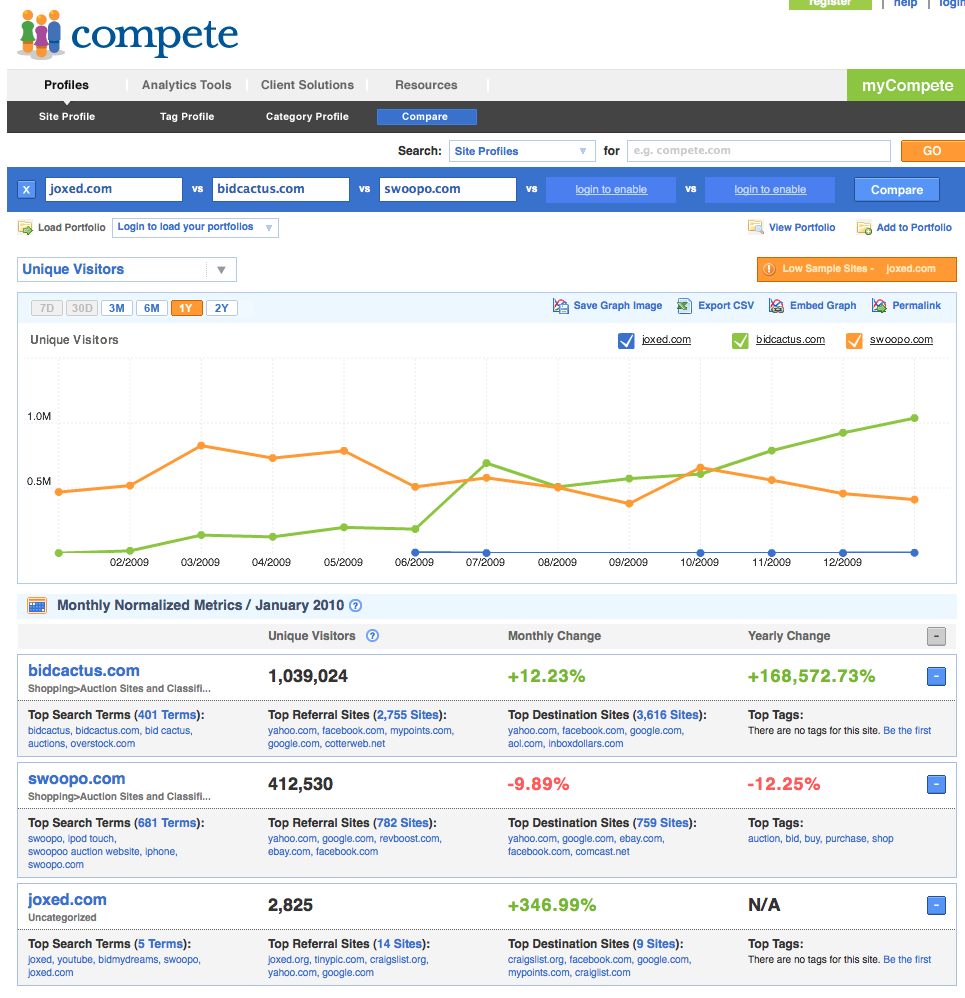 Now, we know that these statistics, if not directly measured can be a little bit off, but off by as much as Joxed.com is telling us?

“We are crushing the numbers that BidCactus and Swoopo are ‘putting up.”-Joxed.com

We don’t think so.

Tell us about your experiences with Joxed.com and join our penny auction forum!

That’s why online pharmacies is becoming more popular over the last years. Well-known are remedies which are used to reduce inflammation caused by inflammation of the skeletal muscle etc. There were only few examples. Did somebody tell you about canadian generic Viagra? Maybe you yet know about the matter. Sexual dysfunction can be a result of a physical condition. Even when it has a physical why, psychological problems can make the disorder worse. Sex drive problems are so commonly a product of how you feel that there is some to that “headache” saying after all.

Filed Under Legit or Not? Tagged With bot bidders, joxed.com, legit or not, Penny Auction, scam, shill
About the author: Connect with me on Google+
14 comments… add one