We recently tried out new penny auction site ShopBIG.com. Intrigued by the quick-ship time, ability to purchase items minus bids already spent if we weren’t the winner, and the “community payback”  feature, we interviewed the CEO of ShopBIG, Glenn S. Meyers.

“We separate ourselves from the rest of the penny auction pack with a full transparency auction model. Our Monthly Community Payback really demonstrates our partnership with our customers- 25% of all profits back to the community in the form of full value, unrestricted bids. Our community members enjoy the chat rooms, blogging, forums, avatars and other social features of our site. In our quest to making our site as user-friendly as possible we are working on making our site more mobile-friendly. We are developing Mobile Alerts, Alert Wish List, Mobile Bid Pack Purchasing—just a few of the new features we will be adding to ShopBig Auctions in the near future. Additionally, we are planning to create some deep vertical sites to capture the passion of auto, luxury and wine enthusiasts.” 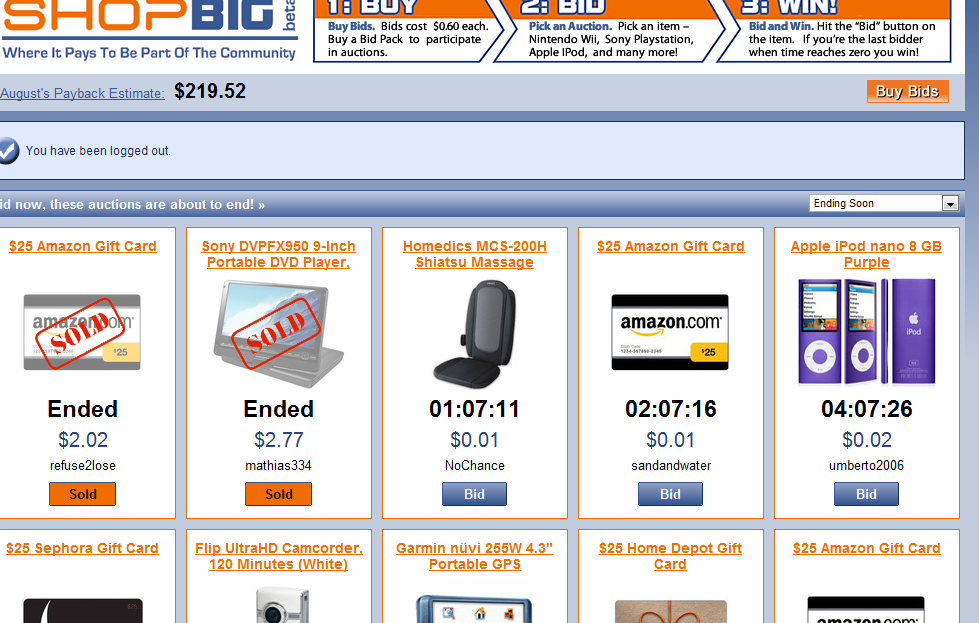 Glenn Meyers – ShopBIG: I’ve had a long successful history in the internet and eCommerce space. My background includes such multi billion dollar successes as Rare Medium and Sky Terra. Additionally, as a serial entrepreneur I have been part of VC funding nearly a hundred companies in the internet space since the 199o’s. Most recently we have operated a series of comparison shopping sites both general (100+ million items) and microsites ( item specific ie. WII) for the last four years. We found the penny auction space a natural product extension to our B to C businesses. We have taken the best features from our shopping sites and merged them with the (coolest) social media aspects to create a unique community-based penny auction site.

Glenn Meyers – ShopBIG: We have been Beta testing our site for the last four months and officially opened it to a select group in a limited public release on June 24, 2010. We are very excited by our community member initial responses to our site which confirms we are on the right track. We are different than all other sites as we transparent and share our financial success with our Community members.

Penny Auction Watch: What kind of items do you have lined up? Do your auctions run on a schedule?

Glenn Meyers – ShopBIG: We try to feature the latest merchandise – electronics, household, tools, fashion and gift cards. Additionally, we regularly take merchandising suggestions from our community members both on our community page and twitter and face book pages which can be found at www.twitter.com/shopbigauctions. Our auctions run on a pre-announced schedule. We never stop or delay an auction – we let it run its natural course. Some auctions within end in a short period of time and others run for hours – it all depends on the Community interest in the item offered.

Penny Auction Watch: What are the timer increments between bids/does this vary by auction?

Glenn Meyers – ShopBIG: Currently, our auctions increase 20 seconds for every bid placed in the auction.

Penny Auction Watch: What are your  shipping costs?

Glenn Meyers – ShopBIG: No Shipping and Handling Charges –Ever. Even our Buy it Now customers are reaping the benefits. We want to show our further thanks to our Community members by picking up all of the shipping and handling charges for the items.

Glenn Meyers – ShopBIG: ShopBIG allows eight (8)wins in a 28 day period and three (3) wins allowed per 24 hour period. We also limit you to one (1) win of the same item over $285 in value during a 28 day period. Additionally, we limit each user to one (1) win of any item over $999 in a 28 day period. Items purchased through the Buy It Now option do not count towards your auction limits. We only allow one user ID per email address. Additionally, we do not allow our employees to bid.

Penny Auction Watch: Is there a story behind the ShopBig name/theme?

Glenn Meyers – ShopBIG: We have operated a comparison shopping site called ShopBig for years and have generated a loyal following in excess of 15,000 unique visitors per day. Our customers asked us for a community based auction experience and we listened. We decided to capitalize on our pre-existing branding and various design elements. Additionally, we have a very robust networking and hardware infrastructure already developed: it was a natural progression of the ShopBig for this new product extension.

Discuss and post your reviews of ShopBig in the ShopBIG section of the Penny Auction Watch forum.

That’s why online pharmacies is becoming more popular over the last years. Well-known are remedies which are used to reduce inflammation caused by inflammation of the skeletal muscle etc. There were only few examples. Did somebody tell you about canadian generic Viagra? Maybe you along know about the matter. Sexual dysfunction can be a result of a physical condition. Even when it has a physical why, psychological problems can make the disorder worse. Sex drive problems are so commonly a product of how you feel that there is something to that “headache” saying after all.

Next post: This Site is For You: What Do You Want?