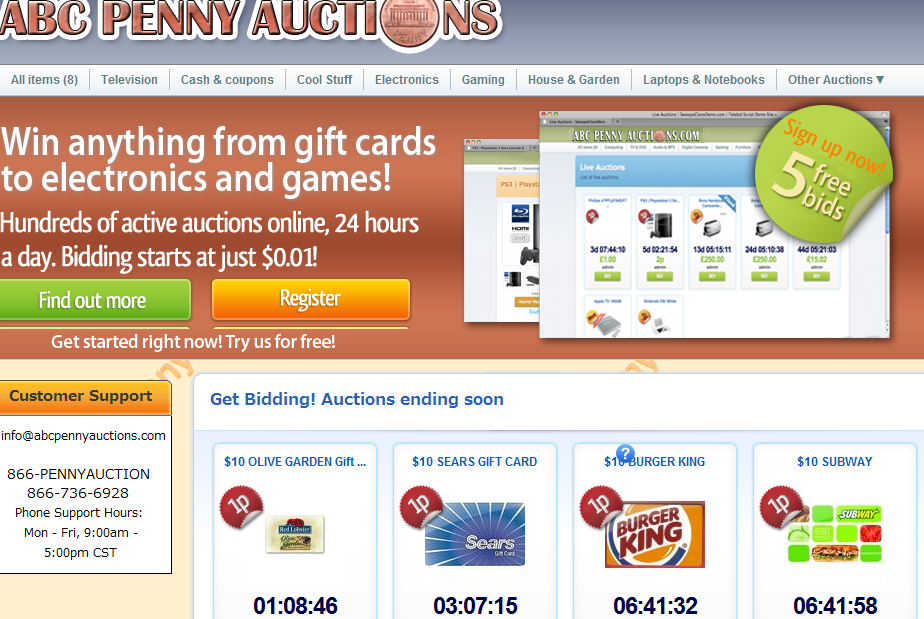 ABCPennyAuctions.com is now back with a new owner. Armed with 20+ years of customer service experience & having owned and operated retail business, Frank Grimes of Pennsylvania has written to tell us that he has purchased ABCPennyAuctions and is excited to run a legit penny auction. Items are already up for bidding now, gift cards, and ABC officially re-opens on October 4th.

Here’s what Frank told us,

“Well where do I begin, probably best to answer the question I have been asked a lot lately by family & friends. “Why
this, why Penny Auctions”?  I can answer in one sentence, “I got hooked when I won my first auction with Quibids, I won a Lowe’s $50 gift card for $1.31 with bids invested, the total was $28.31”. Then I started doing the research, and I was amazed at how many sites were out there but also equally amazed at how many were fly by the night operations and now out of business. I saw Cheryl’s site for sale and started to correspond with her and was very impressed with her style and commitment to customer service and it’s a shame
that she had a bad programmer, but Cheryl and I had the same idea, provide a great site, with great, actually impeccable customer service and great bargains. But more importantly, in this industry, a site that is honest, has integrity, and would never do anything dishonest, immoral, or even the slightest bit illegal.”

ABCPennyAuctions can still be reached by dialing 1866-Penny Auction.

That’s why online pharmacies is becoming more popular over the last years. Well-known are remedies which are used to reduce inflammation caused by inflammation of the skeletal muscle etc. There were only few examples. Did somebody tell you about canadian generic Viagra? Maybe you afore know about the matter. Sexual disfunction can be a result of a physical condition. Even when it has a physical reason, psychological problems can make the disorder worse. Sex drive problems are so commonly a product of how you feel that there is something to that “headache” saying after all.

Next post: Stop Committing Fraud! We’re Tired of It!