A few days ago we asked the question of whether or not social media with penny auctions is a good idea, the majority of our members say that it’s not a good idea and can facilitate collusion, another says it’s impossible to collude due to the large volume of bidders. Now, today while on a penny auction site that has Facebook connect we made an interesting observation.  With Facebook connect the site will display the user’s Facebook profile picture next to their username, this particular user made their profile picture a TinyUrl link to their Twitter page, why would they want to do that? Well, take a look at their Twitter profile:

Their Bio: I’m a BigDeal Pro! You’d better quit my auctions to save your time and your dollars coz I’m bidding till the end. Have a doubt? check the past MacBook auctions!! Their Twitter name? Their BigDeal.com username. 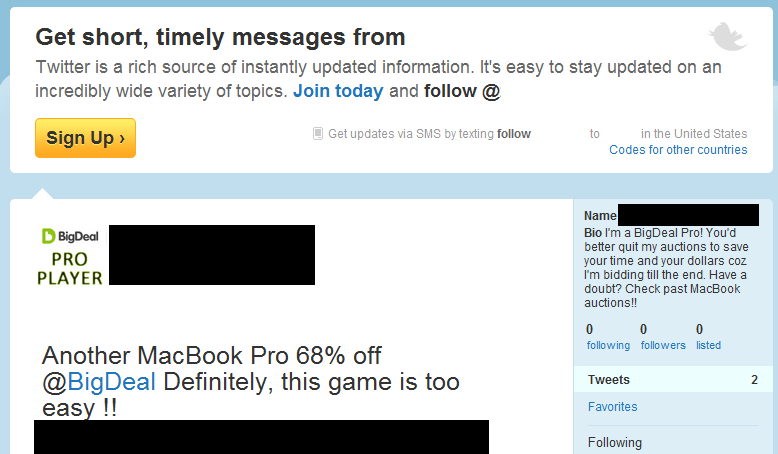 It’s apparent that this user has applied intimidation tactics as well as the “bid to win” strategy to their bidding, does it always work? No, but there are bidders who do this so often that it becomes profitable for them, but try going against someone else who is “in it to win it” you’ll either lose, pay retail or maybe win if their connection dies? 🙂

What do you think of this social media stunt, a great idea, or sneaky & unethical?

That’s why online pharmacies is becoming more popular over the last years. Well-known are remedies which are used to reduce inflammation caused by inflammation of the skeletal muscle etc. There were only few examples. Did somebody tell you about canadian generic Viagra? Maybe you afore know about the matter. Sexual malfunction can be a result of a physical condition. Even when it has a physical why, psychological problems can make the disorder worse. Sex drive problems are so commonly a product of how you feel that there is some to that “headache” saying after all.