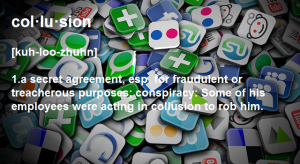 A few penny auction sites have instituted chat features and Facebook Connect, they do this to aid in transparency. We think this creates a problem. As evidenced by what we saw on our forum, as early as when this site first opened in May of last year, users can take advantage of private messaging functions and e-mail to cheat and collude on penny auctions.

More and more penny auction sites are adding chat functions & connecting to Facebook, and users’ full names are being displayed. We’ve told these sites that this probably isn’t a good idea. A few months ago ex-forum members were even found colluding in a chat room. Some penny auction bidders have been found to create Facebook profiles with their bidding names. Now, why would they have to do this?

Users are continuing to report that they’re receiving threatening e-mails and/or invitations to collude on particular sites by way of Facebook.

Take a look at what our members are saying:

This is an awesome thread. What creeps me out is I had a similar experience. Not really similar except that someone contacted me only once through Facebook.

The message he sent was:

Ok. I think you’re *********. I am tired of battling you on this site and losing my bids – as I am sure you very much dislike me, ahem. Can we make a deal? When I see you trying to win something I won’t challenge you; and vice-versa. What d’ya say?

I thought it weird at first, thinking he might be trying to get me to admit to collude and thus get my account terminated, and then scary, wondering how on earth her found me as I don’t have the most popular name in the phone book and don’t know how on earth he found me.

Tell us what you think: Can social networking work with penny auctions?

Some rights reserved by KEXINO

That’s why online pharmacies is becoming more pop over the last years. Well-known are remedies which are used to reduce inflammation caused by inflammation of the skeletal muscle etc. There were only few examples. Did somebody tell you about canadian generic Viagra? Maybe you along know about the question. Sexual malfunction can be a result of a physical condition. Even when it has a physical reason, psychological problems can make the disorder worse. Sex drive problems are so commonly a product of how you feel that there is some to that “headache” saying after all.

Next post: User With Same IP as Steve At SlamPenny.com Posts That He’s Won Items?