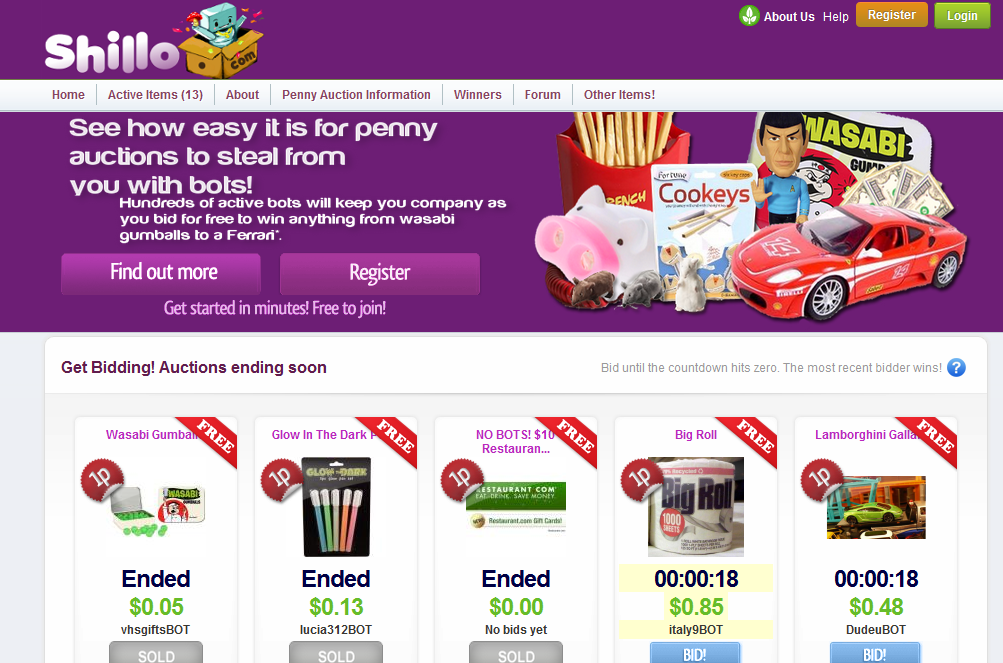 UPDATE JONATHAN SMITH (OF PENNYAUCTIONCOMMUNITY.COM) SOLD ME ILLEGAL SOFTWARE HE DID NOT EVEN HAVE RIGHTS TO. MY APOLOGIES TO SCRIPTMATIX I have removed the software from Jonathan’s server.

Some of you may be aware that we recently announced Shillo.com, Shillo is our 100% free penny auction demonstration site that shows how easy it is for penny auction sites to steal from consumers with bot bidders, well, today the UK Office of Fair Trading issued a press release regarding penny auction shill bidding, in particular Scriptmatix, the developer of the PHP Penny Auction script that Shillo.com runs on.

Over the past many months we’ve found many penny auction sites to be using this script and even to be running the bot function that Scriptmatix has said was for testing purposes (yet still had/has the options for a site owner to input hidden reserves). According to the OFT, it turns out they were also still marketing the script by stating the following: “‘Never make a loss. You decide when your auctions finish. Price too low? Use the auto-extend feature. Not enough bidders? Use the auto-bidding feature. Making a profit has never been more easy’.” It’s easier than robbing a bank.

Unethical script developers need to be stopped, so do the penny auction sites that shill bid with bots and by manual means!

We’re extremely thankful and glad that the OFT is committed to monitor penny auctions and is taking bot bidding/shill bidding serious!  However, we do feel that these script developers should not even be able sell the script with bots for “testing” purposes. They should not be there at all.

“The OFT has secured undertakings from Scriptmatix, a software developer, to prevent it from promoting an artificial bid function in the penny auction software packages it supplies.

Penny auctions are a popular online shopping method where players pay a small non-refundable fee (often of just one penny) each time they place a bid on an item.

The OFT believes that if used in ‘live’ penny auctions the artificial bid function is unlawful as it can mislead consumers into bidding against one or more fictitious ‘players’, so incurring costs in placing a bid and also in upping their bid.

Scriptmatix, the manufacturers and suppliers of the phpPennyAuction software package, has provided undertakings not to promote the artificial bidding functionality and to clarify that such functionality is to be used only for testing purposes in the absence of any human subscribers.

The OFT found that Scriptmatix encouraged the use of the artificial bidding via marketing on its website by using phrases such as, ‘Never make a loss. You decide when your auctions finish. Price too low? Use the auto-extend feature. Not enough bidders? Use the auto-bidding feature. Making a profit has never been more easy’.

Scriptmatix has contacted the 561 businesses and individuals that purchased phpPennyAuction informing them that the artificial bidding function should not be used on a live penny auction website and should be disabled before people are invited to participate in an auction.

The OFT will continue to monitoring penny auction websites to see whether consumers are being misled by artificial bids.

‘We can see no lawful basis for the use of an artificial-bidding function on a live penny auction website. People expect to be competing only against other human participants, and the use of fake bids fundamentally undermines the integrity of the auction process.

‘The internet offers many opportunities for novel and exciting businesses to flourish, and for consumers to get some great deals, but it is important that people are able to make properly informed decisions, and are not misled by technical trickery.’

The OFT has also closed its parallel investigation into UK Penny Auction Limited, which was trading as www.battybid.com. The OFT investigation found that this auction site was actively using the artificial bid function and following consultation with the OFT, the Battybid website has closed and UK Penny Auctions Limited voluntarily dissolved.

The penny auction commercial model offers consumers the opportunity to make real-time bids against other consumers for products displayed on dynamic web pages. As with conventional auctions where bids for items are raised by signaling from bidders, bids on penny auction websites are raised (typically by an increment of one penny) when visitors to the site ‘click’ on dedicated areas on the webpage. Commercial online penny auctions require consumers to buy in advance a fixed number of bids that can be used to compete for the acquisition of an item on offer. Such bids are generally bought in packs of between 10 and several hundred bids. The cost of placing each individual bid may vary between 40 pence to as much as £1.50 or more.

Download the OFT’s e-Protection strategy (pdf 658kb) which sets out its long-term strategy to protect consumers shopping online in the UK.

This enforcement action is part of the OFT’s increased internet enforcement capability. From 1 December the OFT took the lead on a common activity with 11 other EU Member States under the Consumer Protection Cooperation (CPC) network to improve investigation and enforcement of consumer protection issues online. The activity is partly funded by the European Commission.

Further information for businesses on their obligations under the CPRs is available on the Consumer Protection from Unfair Trading Regulations 2008 page.

The OFT does not provide advice or resolve individual complaints for consumers. Consumers who are concerned they have been unfairly treated or want advice on their personal circumstances can contact Consumer Direct.”

I hope the US Government / FTC does something about the US scam penny auction sites, because they’re out there and consumers are being swindled.

Discuss this and all penny auction issues in our forum.

That’s why online pharmacies is becoming more popular over the last years. Well-known are remedies which are used to reduce inflammation caused by inflammation of the skeletal muscle etc. There were only few examples. Did somebody tell you about canadian generic Viagra? Maybe you afore know about the matter. Sexual dysfunction can be a result of a physical condition. Even when it has a physical cause, psychological problems can make the disorder worse. Sex drive problems are so commonly a product of how you feel that there is something to that “headache” saying after all.