Bidstick Auctioning a Real Live Marmoset?! – Are they Licensed by the USDA? 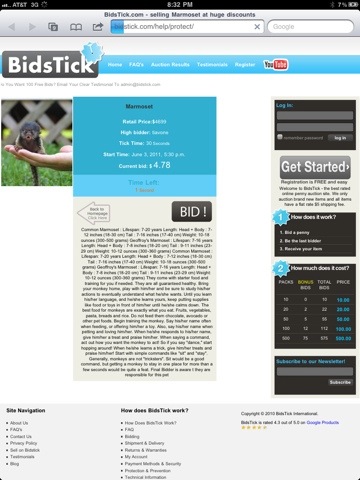 Right now penny auction Bidstick.com is supposedly auctioning the oddest thing we have yet to see on a penny auction, a real live Marmoset. 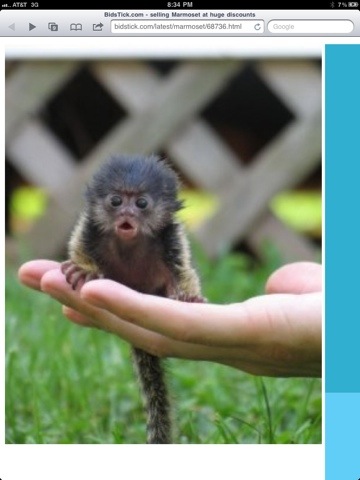 Bidstick is allegedly responsible for using our trademark on YouTube, the shilled review site pennyauctioninvestigator and pennyauctionwatch.us, blatant TM infringement filled with libel.

But are they really auctioning a real live mammal? Does BidStick hold a U.S.D.A. license to sell marmosets?

“A permit or license is not needed to own a marmoset or tamarin, however, a U.S.D.A. license is required to breed, exhibit or sell them. A prospective owner should inquire to ensure that the breeder or dealer selling monkeys has the necessary license. Disreputable dealers and breeders will sell primates to capitalize on profit opportunities. Anyone selling nonhuman primates without a license should be immediately reported to the U.S.D.A. Different states may have their own laws regarding ownership of non-human primates (NHPs). Also, counties may have their own laws that can supercede state laws regarding NHP ownership. It is always advisable for a prospective owner to ensure that owning a NHP is legal in the area in which they reside.

Marmosets and tamarins are beautiful, intelligent monkeys. Even so – unless a family has owned monkeys before – they should be discouraged from purchasing a callitrichid as a pet. Even with past experience, such a decision should not be undertaken lightly. If a client has decided to purchase a monkey, suggest they consider purchasing an unrelated pair and eventually breed them. That way they can enjoy the infants and juveniles, and when they outgrow their cuteness, they can contribute to conservation efforts.” – Via http://www.exoticpetvet.net/primate/care.html

Selling non-humane primates without a U.S.D.A. license is a violation of the Animal Welfare Act.

They come with starter food and training for you if needed. They are all guaranteed healthy. Bring your monkey home, play with him/her and be sure to study his/her actions to eventually understand what he/she wants.

Until you learn his/her language, and he/she learns yours, keep putting supplies like food or toys in front of him/her until he/she calms down. The best food for monkeys are exactly what you eat. Fruits, vegetables, pasta, breads and rice. Do not feed them chocolate, avocado or other pet foods. Begin training the monkey.

Start with simple commands like “sit” and “stay”. Generally, monkeys are not “tricksters”. Sit would be a good command, but getting a monkey to stay in one place for more than a few seconds would be quite a feat. Final Bidder is aware t they are responsible for this pet”

— As an animal lover, I’m appalled by this display.

Filed Under Hall of Shame
About the author: Connect with me on Google+
5 comments… add one