Something Doesn’t Seem Right About FastPennyCars.com 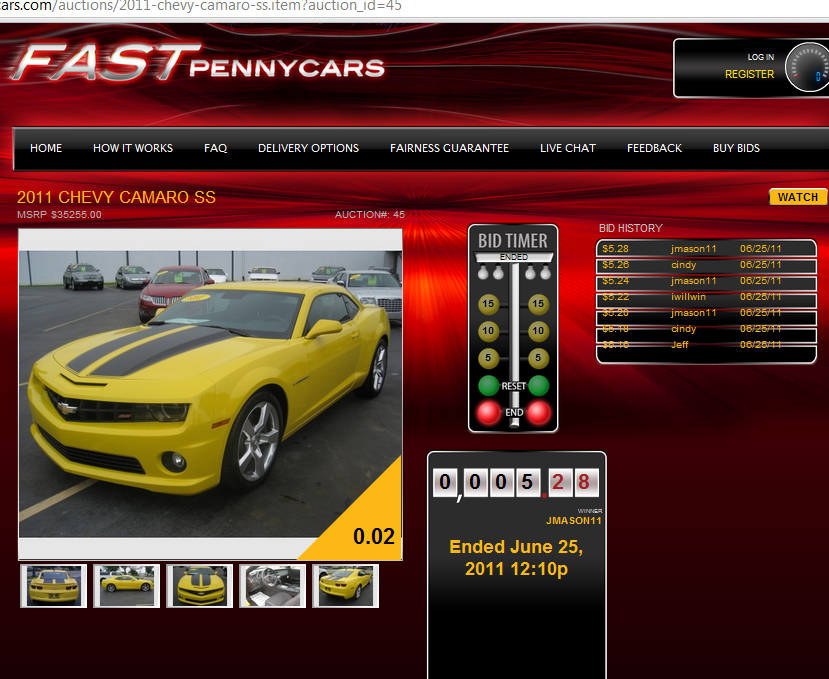 UPDATE: FastPennyCars sent us a response to this article as well as commented below.

Frankenmuth, Michigan based FastPennyCars.com is a brand new penny auction site that offers cars, they just closed their first auction for a brand new 2011 Chevrolet Camaro on June 25th, 2011 at 12:10 pm. The end price was $5.28, the price increased in $0.02 increments, 264 bids were placed in total.

The winner of the Camaro is Jonathan Mason, also of Frankenmuth received the car yesterday. According to Sandy Daenzer, VP of FastPennyCars.com to today’s article posted in the Saginaw News, “Only active bidders knew we were reputable,” Daenzer said. “We figured the first car would go really low, but we’re legit.”

They claim to be legit, and I hope they are, but why would a bidder have the same IP used by the vice president?

To take a look at what we’re talking about, first check out the following comments that were posted in our forum, from one user in particular. From the sound of the comments left by this user, suburbangreen, from the beginning I thought it sounded like they were coming from the company, then I was really surprised when I read a comment where they claim their friends have won on FastPennyCars and that they plan to bid on their next car, a 2011 Mustang. After I checked the IP addresses for this forum member I found something really interesting and I’m pretty disappointed by yet another penny auction site, unfortunately this doesn’t surprise me.

See the comments left by suburbangreen:

“My friends went into this website (FASTpennycars.com) and loved the whole car theme and actually won several gas and automotive related cards. I am waiting to see the video of the winner receiving his 2011 Camaro. I am sure it will be posted on Facebook and YouTube and local media stations for coverage this week. A car going for 5 bucks!!! The website is still offering cards during the week. I will try for those gas cards this week and wait for the next 2011 Mustang auction maybe I can win a car this time!”

“After the 2011 Camaro SS went for $5.28, I actually contacted them to see if it was a legit site and spoke to someone at FASTpennycars.com who told me that it went for less than they expected but hoping to use it as a marketing tool so people can go to their site. I am sure they expected to lose $$$$ money on the first car, but not as bad as they did and I think they will do better with the next two cars they auction. I liked the site. It is very different from the other penny auction sites and their customer service or live chat was great!”

“I will let you know if I see the video on Facebook or Youtube sometime this week. This person must be freaking that they won a 2011 Camaro for 5 bucks!!!!!!! Ahhhhhhhh!!!!”

Notice that Suburbangreen has the following IP address in our forum: 76.231.136.116. When we e-mailed FastPennyCars.com yesterday to ask about the auction, the IP address that Sandy Daenzer replied back from is the very same IP address, 76.231.136.116, she was on the same IP this morning.
See screenshots:

The e-mail address in our database for suburbangreen shows a user on Facebook that is personal friends on Facebook with Sandy Daenzer, and they appear to be sharing IP addresses?
What do you think about FastPennyCars? Discuss this in our forum.

Filed Under Legit or Not? Tagged With fastpennycars, fastpennycars.com, is it legit, penny auctions, reviews, shill comments
About the author: Connect with me on Google+
36 comments… add one

Next post: Does the Entertainment Shopping Industry Have the Potential to Reinitiate the Online Auction?