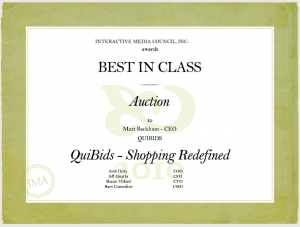 Penny auction site QuiBids has just received awards for outstanding achievement in e-commerce and entertainment., and was awarded Best in Class in the auction category in the 2011 Interactive Media Awards.

The Interactive Media Council, Inc., the nonprofit organization comprised of leading web designers, programmers, developers, advertisers and other web-related professionals, is the primary sponsor of the Interactive Media Awards that runs each year.

“It’s quite an honor to have our work recognized by the Interactive Media Awards.” said Jill Farrand, Director of Public Relations of QuiBids.  “We feel strongly that our projects are world-class examples of how the Internet can be used to bring fun and excitement to every day shopping experiences.  Entertainment Shopping has come a long way, and we anticipate having a big hand in creating great things for this new industry. We are humbled and honored by this accolade, an award that provides evidence that QuiBids is moving in the right direction.”

Have you bid and won on QuiBids or any other entertainment shopping site? Join our forum!

That’s why online pharmacies is becoming more popular over the last years. Well-known are remedies which are used to reduce inflammation caused by inflammation of the skeletal muscle etc. There were only few examples. Did somebody tell you about canadian generic Viagra? Maybe you yet know about the matter. Sexual disfunction can be a result of a physical condition. Even when it has a physical cause, psychological problems can make the disorder worse. Sex drive problems are so commonly a product of how you feel that there is something to that “headache” saying after all.

Filed Under Auction News Tagged With Interactive Media Award, quibids
About the author: Connect with me on Google+
0 comments… add one

Next post: Penny Auction HappyBidDay Turns One, Get Up to 1500 Free Bids This Week!