Is Bidmos a Legit Penny Auction?

Have you bid on Bidmos.com? 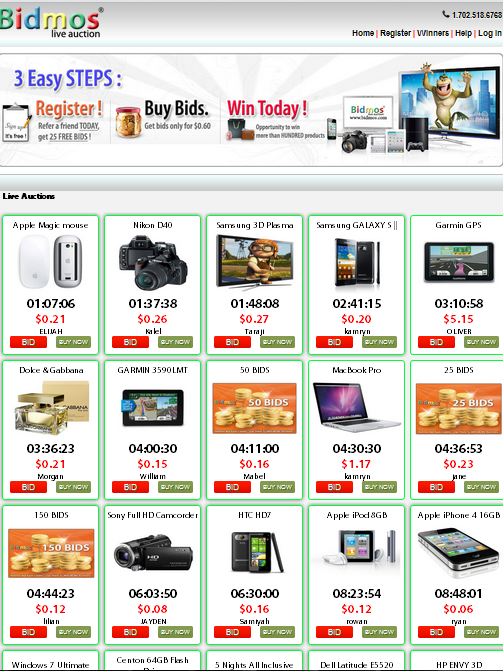 Checking out won/completed auctions we find that the very same items that are actively up for bid today were recently won. End prices very low: $1.27 for a Macbook Pro, with “George” being the winner, HTC HD7 with “Cora”  the winner at $0.24, the 5 Night All-Inclusive Cruise was won by “Dominique” for $0.26.

Not only is there a trend in the items being offered, in that they appear to be recycling the same offering, every single bidder that’s displayed on both their live auctions page and ended items page are real first names and not usernames.

Interesting, it’s not often that we see bidders bidding using names for usernames.

Bidmos.com does not require users to sign up just by first name, you can put anything in the username field, so why then are all of their bidders bidding with first names?

Were they Legit in 2010 and Is Bidmos Legit Now?

Let’s take a trip back to 2010. In 2010 we found something very odd on Bidmos.com, when this penny auction site was operating with the PhpPennyAuction script by Scriptmatix, we found what appeared to be bot bidders bidding on this penny auction site. How’d we do that? Well back in 2010 we discovered that there was a flaw in the phppennyauction software, we already knew that back then that Scriptmatix sold this penny auction software solution with a bot functionality (fake bidders) to act as a “reserve” so site operators won’t have to “lose” money on items. The use of bots on a live penny auction site open to  the consumer market is, in my opinion, nothing short of theft. Anyway, back in 2010 the flaw was that a user’s e-mail address was somehow publicly exposed on the flawed penny auction site’s code. Accordingly, with the use of Firebug, a developer tool, we found what appeared to be proof of bots and even site owners shill bidding on a number of penny auction sites. The bots were reflected in the email addresses with blank fields and the shill bidding by the shady site operators who were bidding on their own site with actual email addresses pointing to the site owner’s email or the sites e-mail address. For info and screenshots illustrating this check out Requesting an Explanation, and some of these:

So what’s the point? Well, if you clicked on the Bidmos link, the one we posted on Bidmos in 2010, it showed no e-mail addresses for bidders, yet my e-mail address for my test user did. Here’s a screenshot reflecting this: 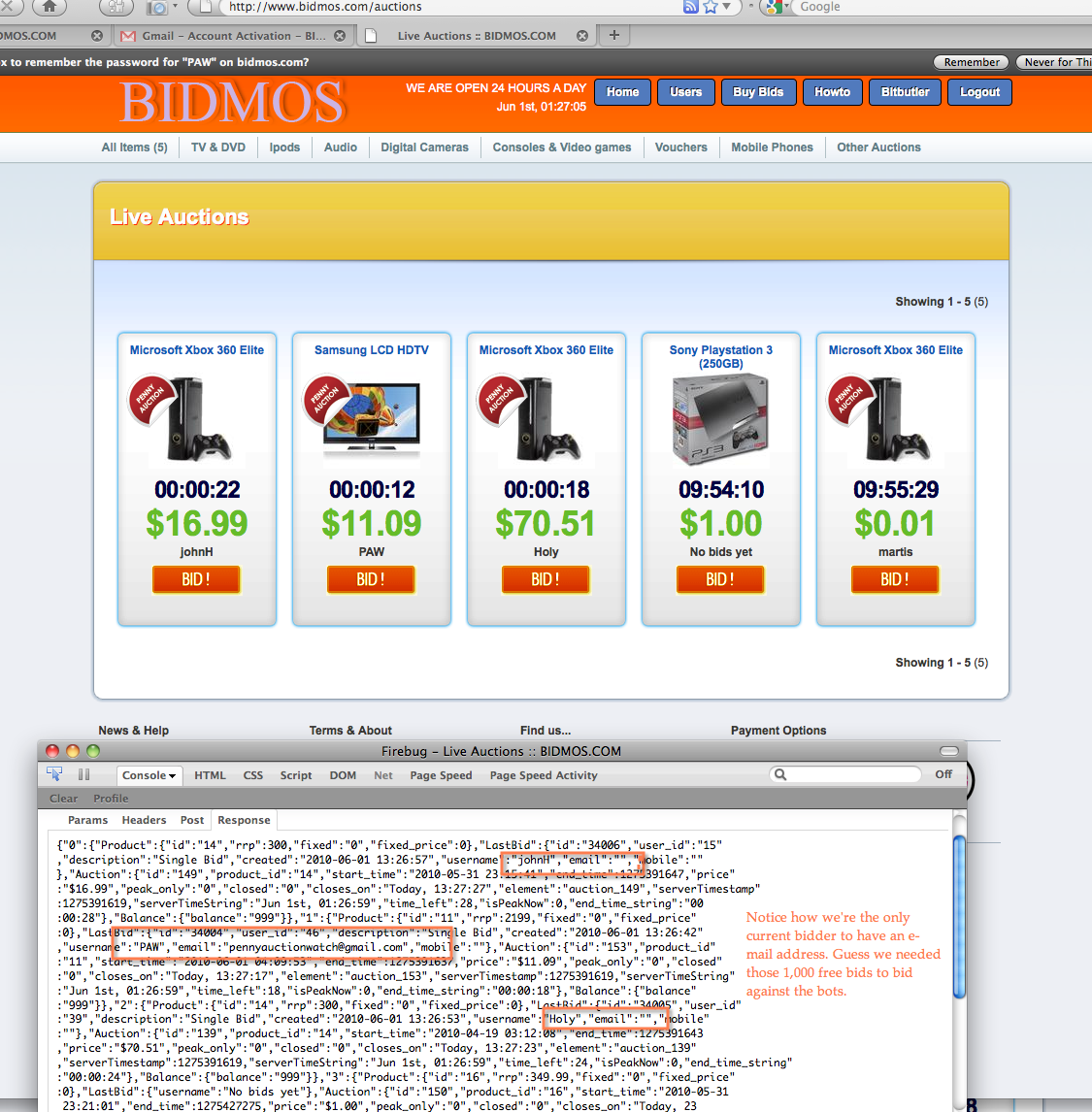 Over the years we have discovered that there have been dozens, if not hundreds, more sites that have used fake bidders to bid against paying consumers…Enough is Enough! This one from way back is classic: Vuulu owner admins to only shipping 1 item.

Back then the site was hosted in Germany: 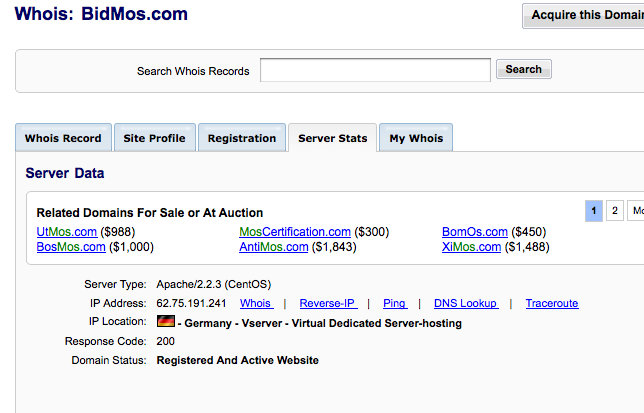 Now the site is hosted in the US and holds a currently active, registered US corporation based registered in Nevada of BidMos, Inc. 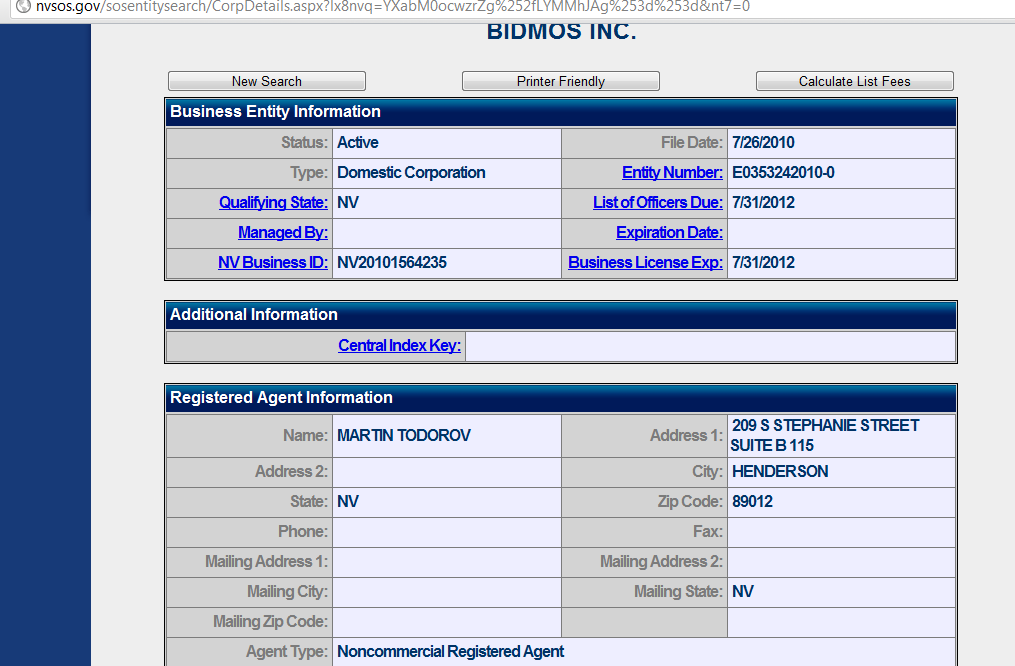 Note how Bidmos’ ended penny auction items are the same as their active items: 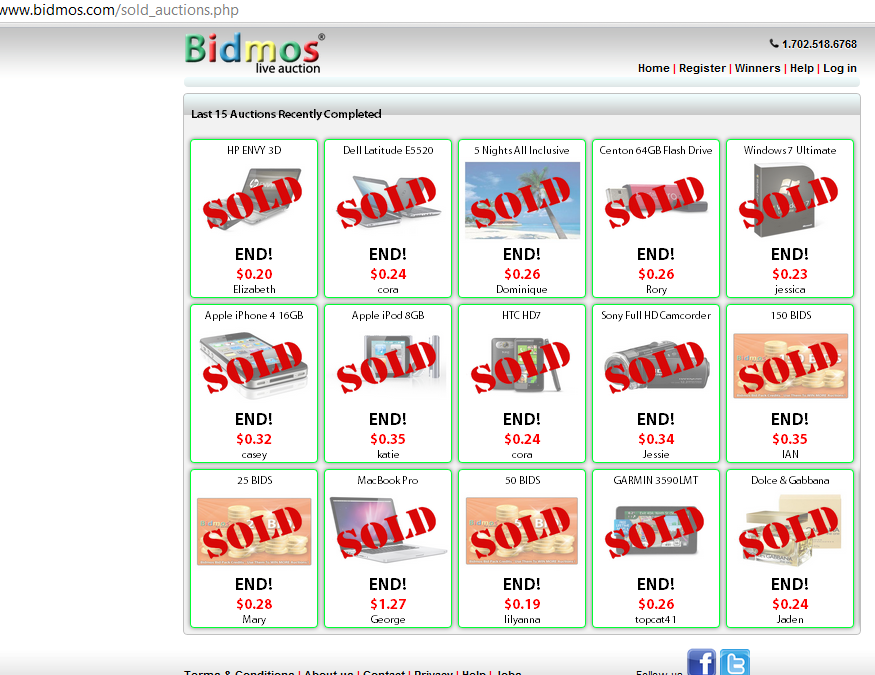 If all of their items and bidders are real they appear to be taking quite a loss.

Is this penny auction site legit? Have you ever tried it and won? We want to hear about your experiences bidding on this and all penny auctions. Join our forum: Here!

That’s why online pharmacies is becoming more popular over the last years. Well-known are remedies which are used to reduce inflammation caused by inflammation of the skeletal muscle etc. There were only few examples. Did somebody tell you about canadian generic Viagra? Maybe you yet know about the problem. Sexual malfunction can be a result of a physical condition. Even when it has a physical reason, psychological problems can make the disorder worse. Sex drive problems are so commonly a product of how you feel that there is some to that “headache” saying after all.

Filed Under Legit or Not? Tagged With bidmos, bidmos.com, legit or scam penny auction
About the author: Connect with me on Google+
0 comments… add one