You Can Win Penny Auctions for Pennies, Just Not Always 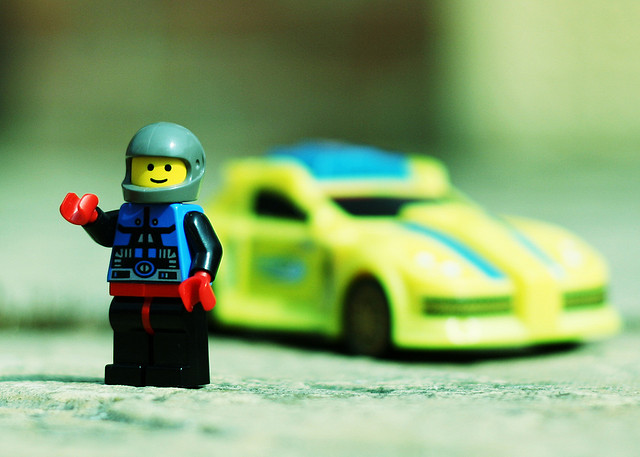 Ask any racer, any real racer. It doesn’t matter if you win by an inch or a mile; winning is winning.
So, you’ve got your eyes set on winning a few items for pennies! iPads, Xboxs, laptop computers, hot shot cameras, gift cards all ending for pennies, pennies!

Did you know that no one is really winning all of these hot items for mere pennies? Ok, well, it’s possible, but that would mean you won the item with just one bid… say the bid cost you $0.75 – but this is if you’re pretty lucky.

If you’re a newbie to the penny auction scene listen up! Penny auctions are called penny auctions because of the auction price  and not how much the item would actually cost you if you were to win it.

Here’s how penny auctions work – and how they can work for you. 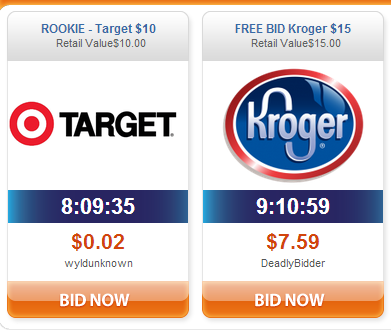 Ok, so notice the $0.02 price tag on the auction up there for a $10 Target gift card? That certainly COULD mean that if in 8 hours,  9 minutes and the auction clock hits 0 without anyone placing a bid after wyldunknown that this bidder would win this Target gift card for the one bid that was placed – on this site, Puppids, it would cost them $0.66 per bid if this bidder purchased the smallest bid pack (15 bids for $10). So $0.66 per bid then $0.02 Wyldunknown would win the item for $0.68 – pennies, yes, but this does not always happen, but it could. Penny auctions are called penny auctions because each bid place raises the potential win price by $0.01. Sounds simple, right?

It can be, but it can also cost much, much more.

Take for instance this iPad penny auction on popular site QuiBids (they advertise heavily online and on TV – so it’s quite busy)… The current price of the penny auction is $20.69. So, no one is going to be winning this one with just a few pennies. 2,069 bids have been placed on this iPad, collectively of course, but one bidder may have already spent $400 in bids just trying to win this iPad. 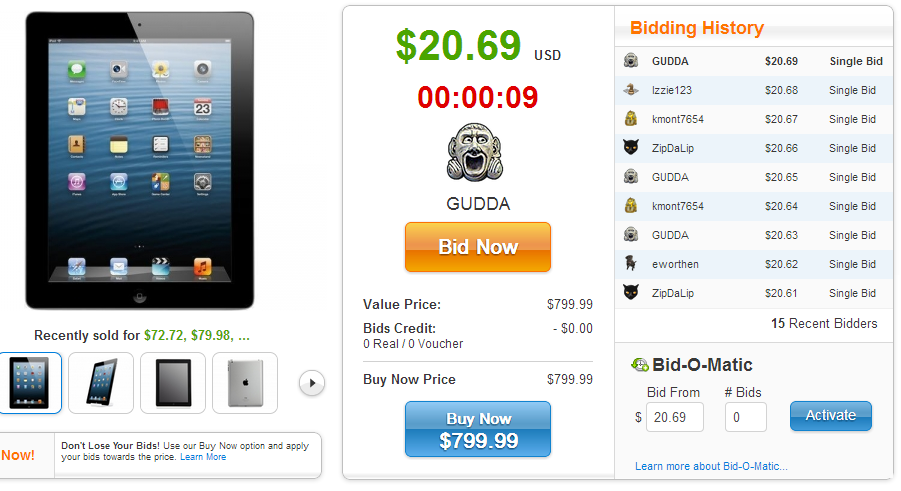 Ok, so let’s say you’re Gudda and you’re wondering how you can win this iPad… There’s a few different techniques you could try, but of course we cannot guarantee you will win it cheaply or even win it at all…

1. You could always stay on top – “bid throttle” a term we use in the penny auction world for when someone bids as soon as an opposing bidder bids so that their name is always showing – because of course, you cannot in unless your name is showing (you were the last bidder) when the clock hits 0.

2. Just don’t care if you win and win by luck, yeah place one bid here and there, maybe you’ll get lucky and win…

3. Conserve your bids by bidding towards the end every time – but you could end up losing due to latency (lag time between the auction clock time and the actual seconds left). Consistently bid at the last $0.02-0.01 – this may intimidate your opponents to the point where they stop bidding because they figure you keep coming in after their bids.

Caution – there really isn’t a foolproof way to win penny auctions, you just have to buy bids, bid consistently and bid often and hopefully you’ll win. If not, at least on QuiBids you could “buy it now” pay the difference between what you’ve placed in bids so far and the MSRP and take the item home at cost, at least you recoup lost bids that you wouldn’t have been able to had you been bidding on a non buy-it-now site.

If you decide to check out Puppids or QuiBids let us know what you think of either site, and please join our free penny auction forum and discuss your experiences with us!

That’s why online pharmacies is becoming more pop over the last years. Well-known are remedies which are used to reduce inflammation caused by inflammation of the skeletal muscle etc. There were only few examples. Did somebody tell you about canadian generic Viagra? Maybe you afore know about the question. Sexual dysfunction can be a result of a physical condition. Even when it has a physical cause, psychological problems can make the disorder worse. Sex drive problems are so commonly a product of how you feel that there is some to that “headache” saying after all.