Have you tried bid66?

Many months ago, before the penny auction site  bid66 opened, we posted an interview that we had with one of Bid66.com’s representatives. Today the Pittsburgh Tribune-Review featured an article on John Conley, Bid66.com’s owner.

We would like to thank Jason Cato for the interview and mentioning Penny Auction Watch. 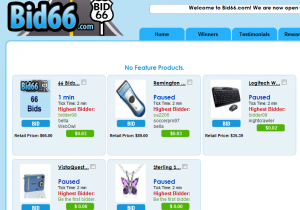 “John “Duffy” Conley is the man behind Bid66.com, a Robinson-based penny auction Web site waging an advertising blitz on local airwaves and a marketing campaign featuring bumper stickers on light poles and guard rails from Penn Hills to the North Side.

“People like to see someone get on the right track,” said Conley, 46, who last summer finished a second federal prison stint for gambling.

Conley and William Curtin, his right-hand man in the video poker empire, want to cash in on the penny-auction bonanza.

“You can’t fix the past, but you can do something with your future,” said Curtin, 54, of Heidelberg. “And that’s what we’re trying to do.”

“A lot of people go to jail because they don’t want to work,” Conley said. “I went probably because I worked too hard.”

Curtin said neither he nor Conley want to go back to prison.

“We want this to be 100 percent legit and legal,” Curtin said. “By no means do I want to look over my shoulder again.”

“He is convinced his reputation for being fair with people through his illegal-gambling operations will help his new venture.”- Read the full article

John Conley says that there are 6,500 registered users on Bid66, and that he has yet to turn a profit.

Bid66.com is popular in Pakistan?

Let us know what you think and if you have tried Bid66.com, discuss in our forum.

That’s why online pharmacies is becoming more pops over the last years. Well-known are remedies which are used to reduce inflammation caused by inflammation of the skeletal muscle etc. There were only few examples. Did somebody tell you about canadian generic Viagra? Maybe you already know about the problem. Sexual disfunction can be a result of a physical condition. Even when it has a physical cause, psychological problems can make the disorder worse. Sex drive problems are so commonly a product of how you feel that there is some to that “headache” saying after all.

Filed Under Legit or Not? Tagged With bid66
About the author: Connect with me on Google+
1 comment… add one