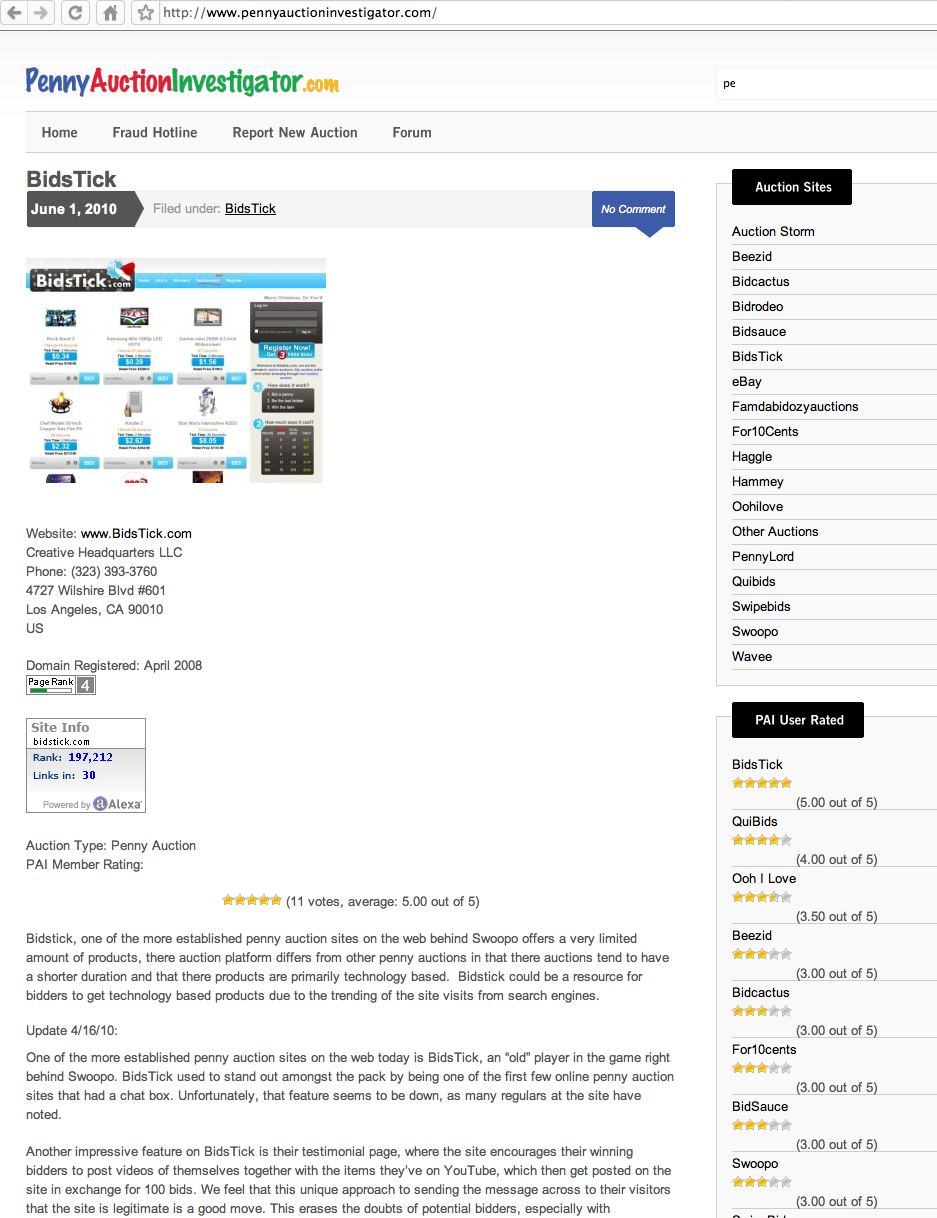 Five minutes hadn’t even passed between the time we finished our post on the apparent shilled “watchdog” blog site by Sonik Technologies’ dba AuctionWebsiteScripts.com’s WatchPennyAuctionScams.com and our discovery of PennyAuctionInvestigator.com which we believe is somehow affiliated with penny auction site BidsTick.com.

We found PennyAuctionInvestigator.com from a comment that was left on the RarityGuide.com Forums, we were subscribed to all new posts on a thread related to penny auctions, here’s the comment by user Mikefurl:

“I can’t vouch for other sites, but I won a Louis Vuitton purse from Bidstick for $10.57. %100 Authentic brand new purse. Also before bidding on any site I would read about it at http://pennyauctioninvestigator.com”

This piqued our curiosity so we checked out.

PennyAuctionInvestigator.com contains a few review summaries of penny auction sites, coincidentally, the latest post, updated to be the first post on the page is on Bidstick.com,  the review is a positive one with a 5 star rating.

“Bidstick, one of the more established penny auction sites on the web behind Swoopo offers a very limited amount of products, there auction platform differs from other penny auctions in that there auctions tend to have a shorter duration and that there products are primarily technology based.  Bidstick could be a resource for bidders to get technology based products due to the trending of the site visits from search engines.

One of the more established penny auction sites on the web today is BidsTick, an “old” player in the game right behind Swoopo. BidsTick used to stand out amongst the pack by being one of the first few online penny auction sites that had a chat box. Unfortunately, that feature seems to be down, as many regulars at the site have noted.

Another impressive feature on BidsTick is their testimonial page, where the site encourages their winning bidders to post videos of themselves together with the items they’ve on YouTube, which then get posted on the site in exchange for 100 bids. We feel that this unique approach to sending the message across to their visitors that the site is legitimate is a good move. This erases the doubts of potential bidders, especially with testimonials from people who’ve been lucky enough to win a laptop or HDTV for only 5 to 10 bucks.

So let’s go to the downside of BidsTick. First of all, this penny auction site has a somewhat dull homepage. Compared to other sites, Bidstick simply looks boring. Of course, it boils down to aesthetic preference, so we’ll let that one go. Another thing we’ve found out is that the site has a very limited range of products. After observing the site for a month, BidsTick has had less than 15 product changes, with “regulars” like an LG refrigerator and ATV repeatedly up for grabs since last year.

Electronics seem to be the main focus of the site, with Apple products, HDTVs, and notebooks auctioned off on a regular basis. If you’re looking to purchase such items at a bargain price, BidsTick may be for you.” -PennyAuctionInvestigator

Many months ago Bidstick admitted to having reserve bots bid on their auctions, they even came and posted shill comments to this blog. Users have reported very slow delivery times on items won. One user told us how she was told to remove all negative comments she left about her poor experience with BidsTick, in order to receive her items within a shorter timeframe.We even found a few Bidstick YouTube testimonials that appear to have been done by minors. 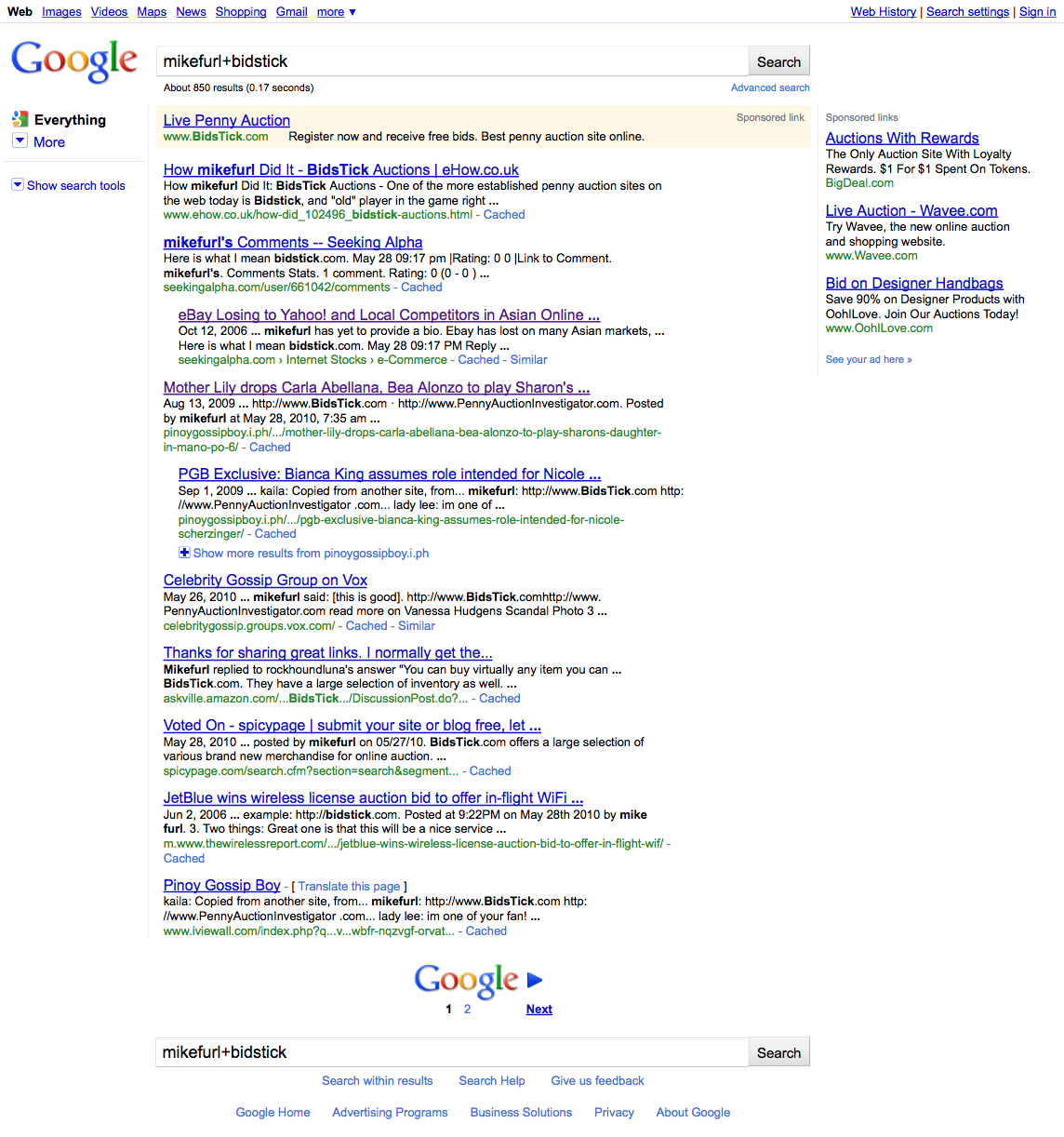 In one comment Mikefurl even says “Ebay has to be loosing market for the numerous penny auction sites. Here is what I mean bidstick.com:” 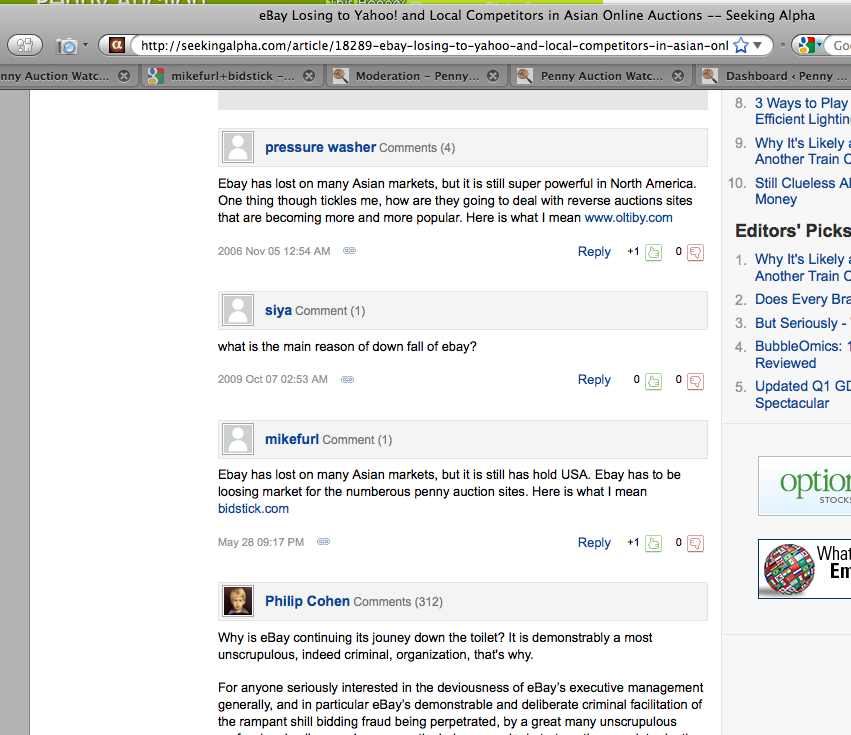 We found a few other comments & articles posted by Mikefurl that seem to have been done for SEO linking purposes, for instance, in this article the keywords penny auction and auction sites are links to Bidstick.com, there are even comments with links posted on celebrity gossip blogs sound familiar? 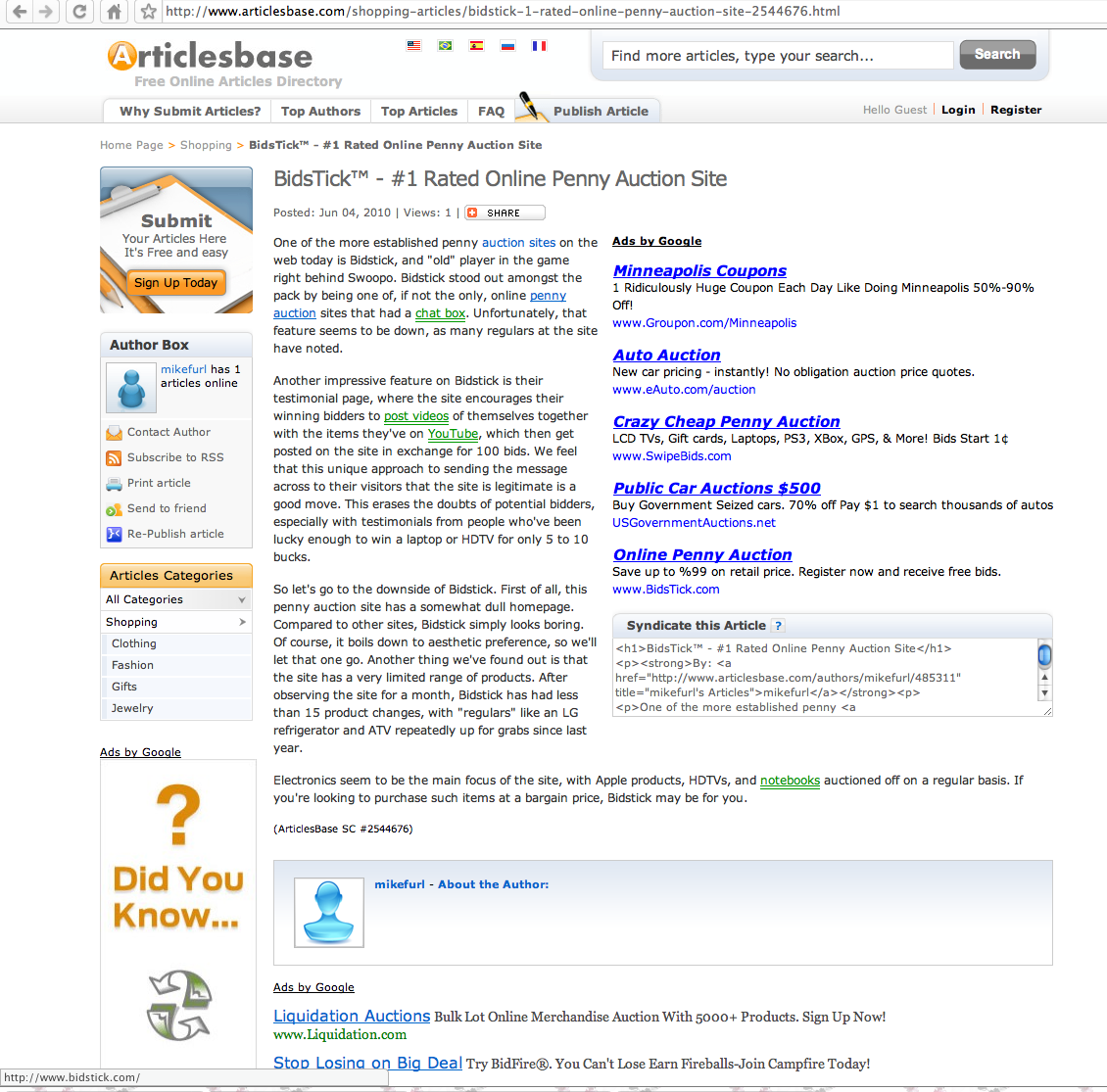 Mikefurl also posted to a response to consumer’s question on how to find a cheap refurbished laptop with a link to Bidstick:

Here’s just another one of the many comments Mikefurl posts with a link to Bidstick.com: 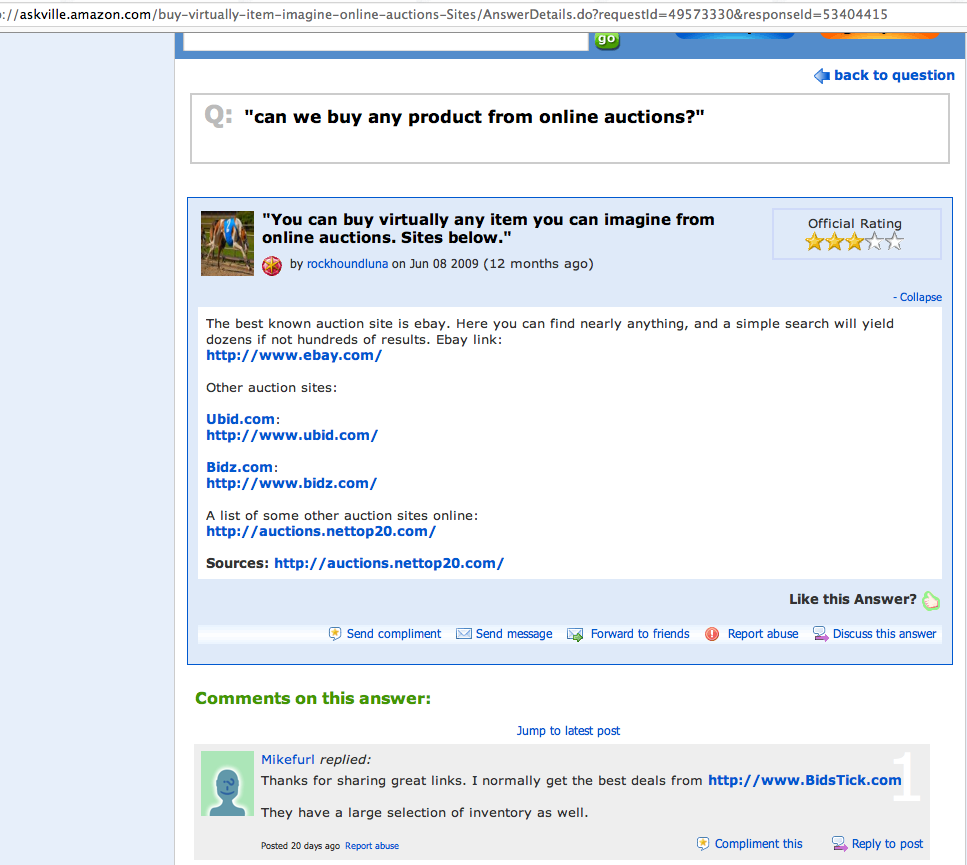 Here mikefurl is backlinking with Bidstick.com being the URL behind keywords Auction Site and PennyAuctionInvestigator.com behind the keywords Penny Auction Watch. 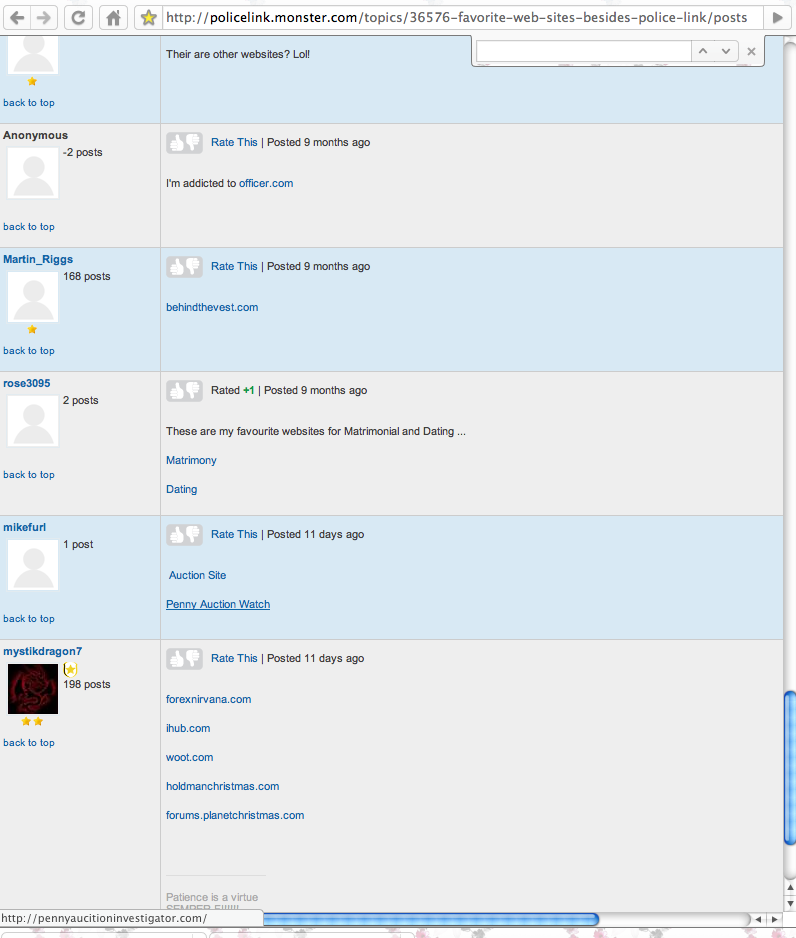 PennyAuctionInvestigator.com even posted that Penny Auction Watch could not be trusted, sound familiar? 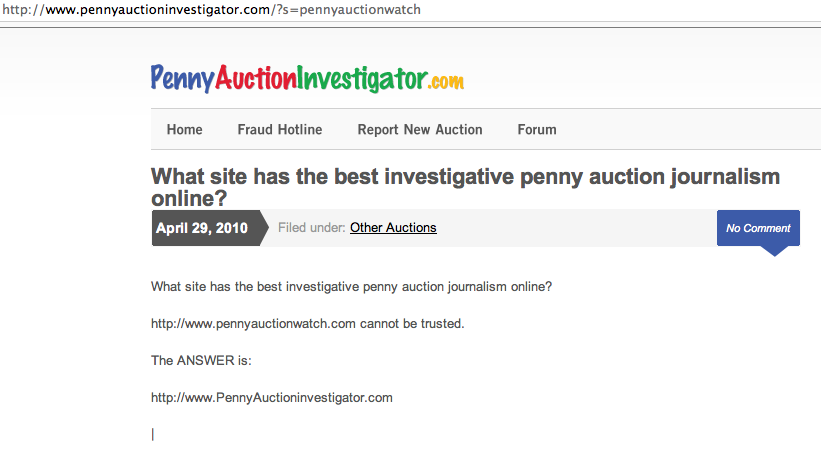 Awhile back we told you how we thought someone with BidsTick was posting that we were not to be trusted all over the Internet after we posted that we didn’t think they were legit, could be.
Now take a look at the Chattango chatbox found on PennyAuctionInvestigator, notice how they told someone to send them an e-mail to mike@bidstick.com & admin@bidstick.com then corrected themselves to say admin@pennyauctioninvestigator.com & mike@pennyauctioninvestigator.com. 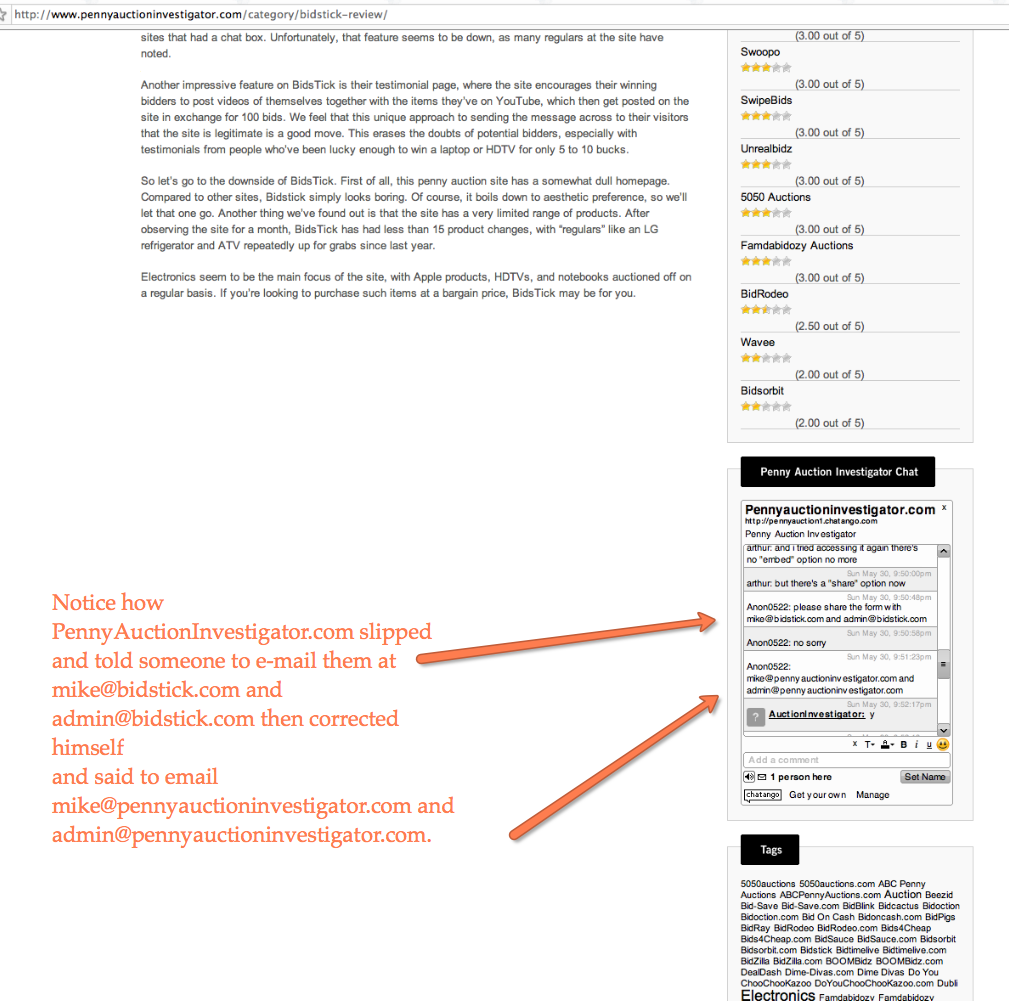 Now, notice the age & location of Chatango user PAI198 who was found to have visited the PennyAuctionInvestigator.com’s chatbox:
33/M/Beverly Hills, CA 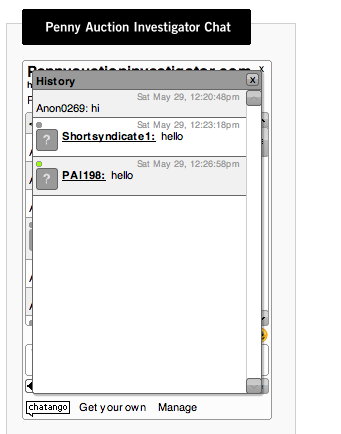 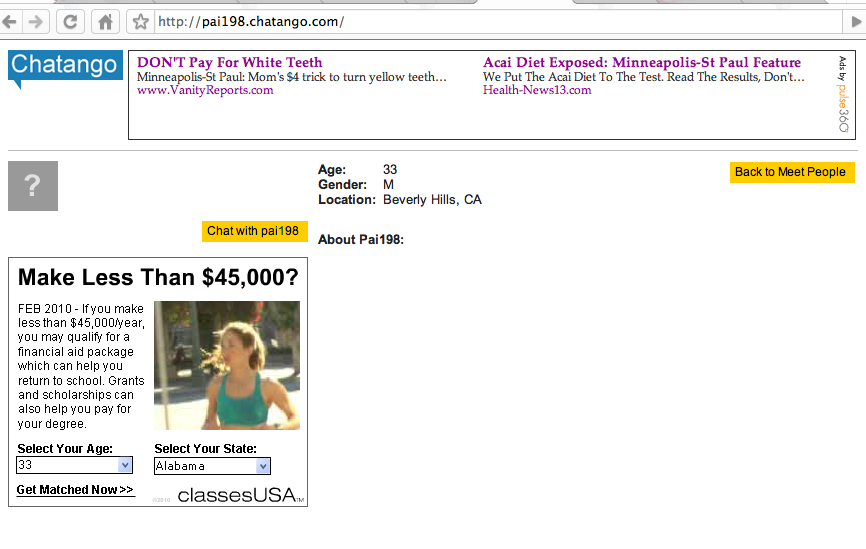 Similarly, The CEO of Bidstick.com’s Myspace profile shows he is 31 and from Hollywood, CA: 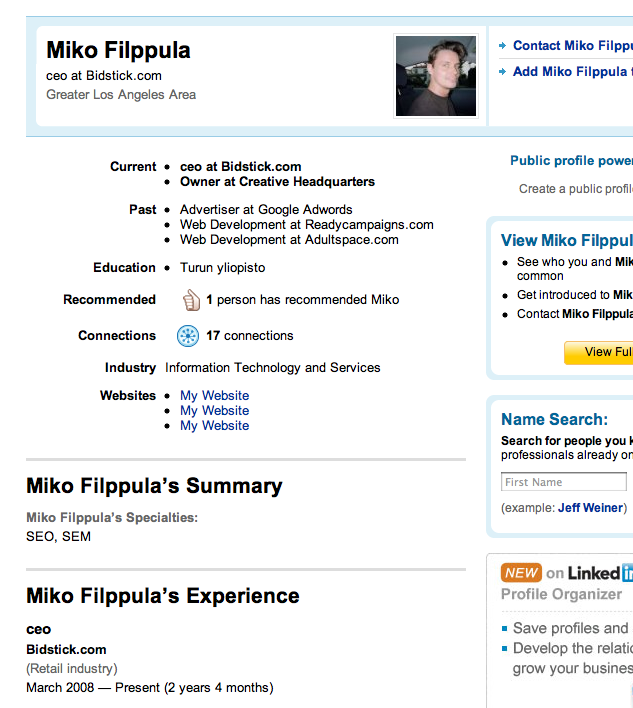 What do you think is going on here?

Filed Under Hall of Shame
About the author: Connect with me on Google+
4 comments… add one