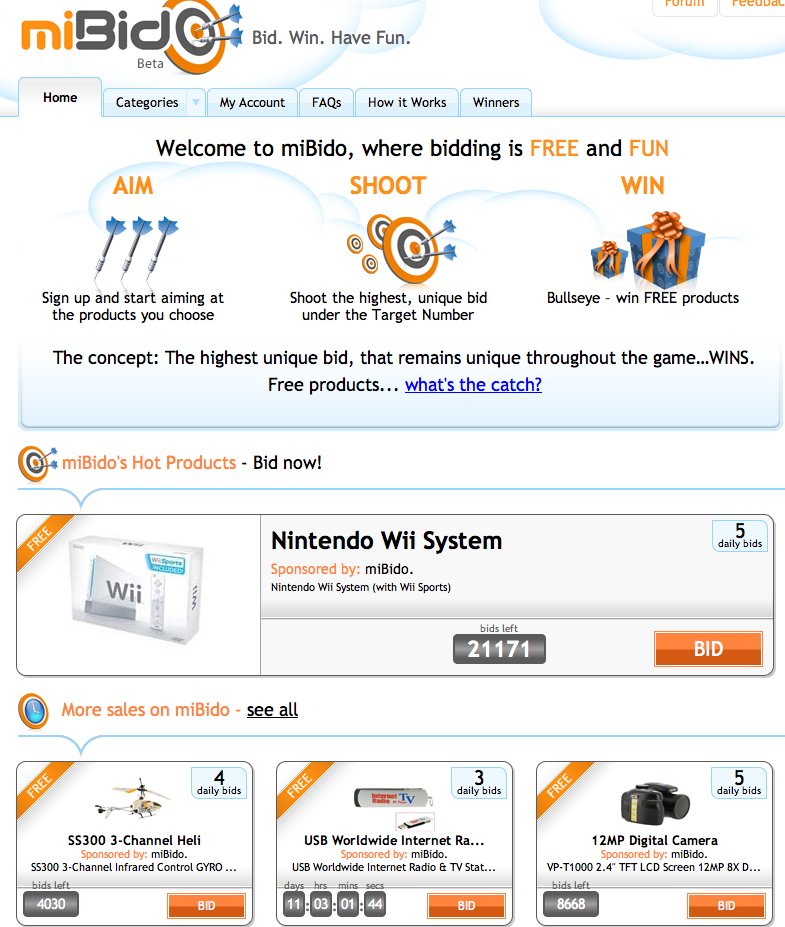 miBido is a new venture that was formed by Yaniv and 3 of his friends, Roy Gabriel, Adi Ben Noun and Shay Dadosh. They intend miBido to be a platform for online businesses to offer their products for free for bidders to win.

Though a lowest unique bid site, miBido is a bit different from other similar sites in that each item has a “Target Number,” in order to win, a bidder must have the lowest unique bid closest to the target number. Free bids are allotted per item/day and they provide opportunities to obtain more free bids by filling out third-party surveys and downloading ringtones, but with anything that is a third party make sure you read the terms because ringtones and the like may not be free. So far miBido has shipped out about 50 items.

Yaniv told us that he has always been attracted to auction sites and bids on many, but he too has won items that he hasn’t received which is why he wanted to build a new platform and offer items for free.

“I want to add that my drive is to stop the frustration we, the penny auction players, are having each day and create a place that is REAL, tangible, a place that wants to make money!!!! but NOT on the players back! – there are so many cool ways to make money online and the idea is to make a living with a happy community behind you! I am also not going to hide behind walls. I am going to say exactly who is the site owner, how to get in touch with me, etc. I want to build a relationships with my future members. “

Yaniv also plans to launch a new, different penny auction site in the future that he says will be a beneficial addition to the industry.

Discuss & review both lowest unique bid and penny auctions in our forum!

That’s why online pharmacies is becoming more pop over the last years. Well-known are remedies which are used to reduce inflammation caused by inflammation of the skeletal muscle etc. There were only few examples. Did somebody tell you about canadian generic Viagra? Maybe you already know about the matter. Sexual malfunction can be a result of a physical condition. Even when it has a physical reason, psychological problems can make the disorder worse. Sex drive problems are so commonly a product of how you feel that there is some to that “headache” saying after all.

Next post: It Was Only a Matter of Time: Penny Auctions & “Free” Trial Schemes