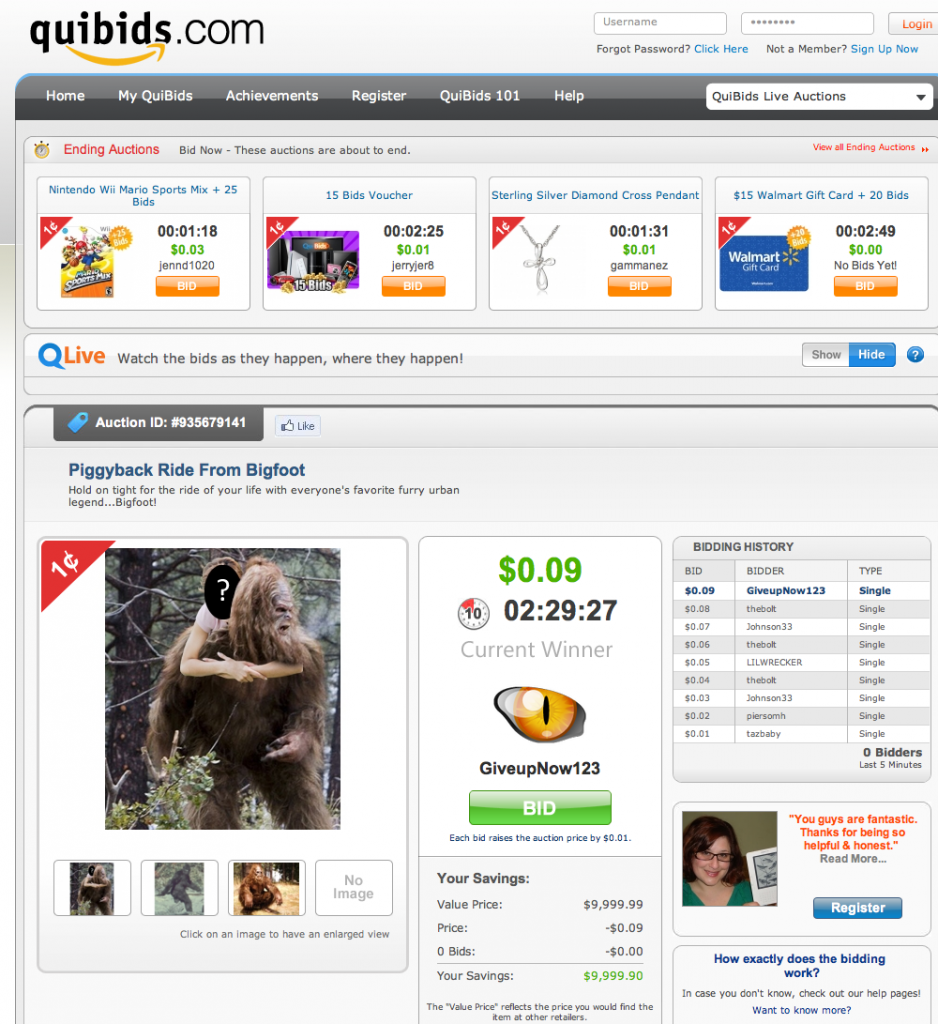 Today, penny auction QuiBids.com has a new logo displayed on their site and it really looks like someone elses’ but we can’t tell whose…. Amazon.com?! 😉

That’s not all, QuiBids also has a totally new lineup today, take this auction for a piggyback ride on BigFoot, valued at $9,999.99. for instance.

Hold on tight for the ride of your life with everyone’s favorite furry urban legend…Bigfoot! You thought he wasn’t real. Here at QuiBids, we knew that wasn’t the case! We have indeed found Bigfoot, and despite popular belief, he is not blurry. So if you’re adventurous and like furry animals, this could be the auction for you. We promise he is kind and gentle. Just don’t say anything offensive, pull his hair too hard, or breathe too heavy.

Bid on this auction if: You have an autographed picture from a cryptozoologist

Avoid this auction if: You have a pet dander allergy

Disclaimer: QuiBids is not responsible for any injuries incurred during the riding of Bigfoot.

APRIL FOOLS! QuiBids is having a little bit of fun, 😉  Like it? To find more of their April Fools items check them out on Twitter, they’re tweeting clues as to the next one coming up.

No bids will be deducted if you decide to bid on their April Fools Day Promotion items.

Discuss this and all other penny auction related issues in our forum!

That’s why online pharmacies is becoming more popular over the last years. Well-known are remedies which are used to reduce inflammation caused by inflammation of the skeletal muscle etc. There were only few examples. Did somebody tell you about canadian generic Viagra? Maybe you along know about the matter. Sexual disfunction can be a result of a physical condition. Even when it has a physical reason, psychological problems can make the disorder worse. Sex drive problems are so commonly a product of how you feel that there is some to that “headache” saying after all.