Yesterday we e-mailed Bid-o-Lator.com to find out more about their new penny auction site, we asked them if they had any hidden reserves. Bid-o-Lator wrote back and told us that there are no hidden reserves, bots or “schill bidders.”

They also told us that they’re, “Still a growing site, only a week old. Certified by PAMA. We are not here to scam, we were created with a goal, that goal is to have a safe, fair and clean auction site. We have had a couple of bumbs due to the fact we are ironing out wrinkles in the new code, but we have tried in every case to explain what has happened and clear any issues up.”

PAMA “Penny Auction Merchants Association” has been questioned to be affiliated with/created by PennyAuctionSoft.com – see also,(in our forum they’ve mentioned that they’ve ‘teamed up’ with them to remove bot scripts. (Also note how PAMA’s seal is a blatant rip off of the VeriSign seal.)

Look at all of the high ticket items they have on their penny auction site for today: an iPad, iPhone, Gas Grill, Dyson Vacuum, DSLR, Garmin, Bose Theater System.

I think I’m in love! I found this site the other day. They are new and I have one some great stuff so far, and low and behold, they ship pretty fast. I won an ipod nano on last saturday and I got it this friday. WOW! They might just have it together. They sent me a thank you email and in that email they gave me a code to get 20% off bid packs for the next week, they also told me to share it with my friends. The code is: allnew it doesn’t seem to matter how many times it’s used. Since I buy there biggest bid packs that already lower my bids to .50 that just took me down to .40 a bid. They are deffinately not a boring site they have alot up and it is higher quality stuff than most. A friend of mine also has won stuff on the site and he told me he got 1 of his items yesterday it was a motorola Xoom and he won it for something like $26 or $27.

Here is the sign up link. TRY IT OUT! Registration – Bid-o-Lator”

–Posted in our forum.

However we need to ask, why did Bid-O-Lator’s shipping take as long as it did?

What we find very interesting, something that doesn’t seem to line up with a site who tells us is they are “not here to scam.” The IP address that Bid-o-Lator used to e-mail us both yesterday and on May 20th, and that of the IP address for the brand new forum member who posted the positive review about his experiences are exactly the same! 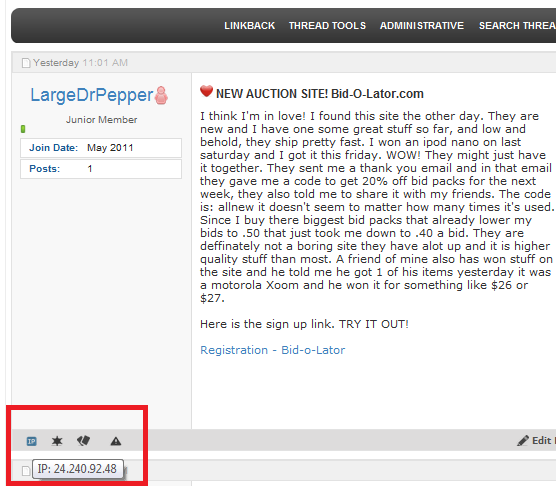 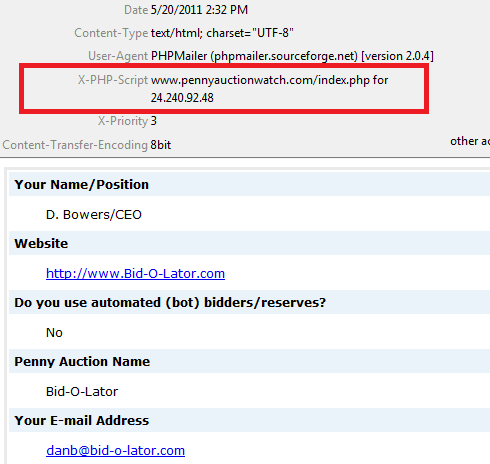 How could this be?

We e-mailed Bid-o-Lator back last night asking who LargeDrPepper is, they have yet to respond.

Have you bid against MonkeyButt94?

Bid-o-Lator shows over 1,183 ended items, yet they’re only a week old?

Bid on Bid-o-Lator and you can bid  against some of these recent winners:

Click here to Discuss this and all things penny auctions in our forum.

That’s why online pharmacies is becoming more popular over the last years. Well-known are remedies which are used to reduce inflammation caused by inflammation of the skeletal muscle etc. There were only few examples. Did somebody tell you about canadian generic Viagra? Maybe you already know about the question. Sexual dysfunction can be a result of a physical condition. Even when it has a physical reason, psychological problems can make the disorder worse. Sex drive problems are so commonly a product of how you feel that there is some to that “headache” saying after all.

Next post: Complete Cornell’s Penny Auction Survey and Get a $25 Amazon.com Gift Card!