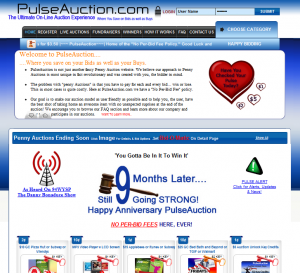 PulseAuction.com, the no bid fee penny auction has just had their 9 month anniversary. Instead of charging per bid for a chance to win, Pulse Auction sells auction “unlock keys” for users to have a chance to bid in the auction.
In honor of Pulse Auction’s 9-month giveaway they’d like to give out free $5 unlock keys to 50 PAW members (membership is free – join!) The first 50 replies to the PulseAuction giveaway thread in our forum will receive unlock keys. Click Here!
Current items include gift cards and a reserve auction for an iPod shuffle. In the case of reserve auctions, if the reserve is not met users will receive the unlock key back to their accounts.
PulseAuction.com is currently accepting applications for charitable organizations & approved organizations to provide auctions to benefit various causes.
–http://www.pulseauction.com/fundraiser.html
What’s especially neat about this penny auction is that because users aren’t paying by the bid but one cost to bid with an unlimited + (you do have to pay the auction end price) is that users can bid as often or as little as they like and not lose more than the set auction unlock key price.
Congratulations PulseAuction! PAW members have won and received items from PulseAuction.
Tell us what your experiences have been like on this and all others penny auctions!

That’s why online pharmacies is becoming more popular over the last years. Well-known are remedies which are used to reduce inflammation caused by inflammation of the skeletal muscle etc. There were only few examples. Did somebody tell you about canadian generic Viagra? Maybe you already know about the question. Sexual dysfunction can be a result of a physical condition. Even when it has a physical why, psychological problems can make the disorder worse. Sex drive problems are so commonly a product of how you feel that there is some to that “headache” saying after all.