Riffington Sold Louis Vuitton for As Low As $0.17 Now They’re Shutting Down 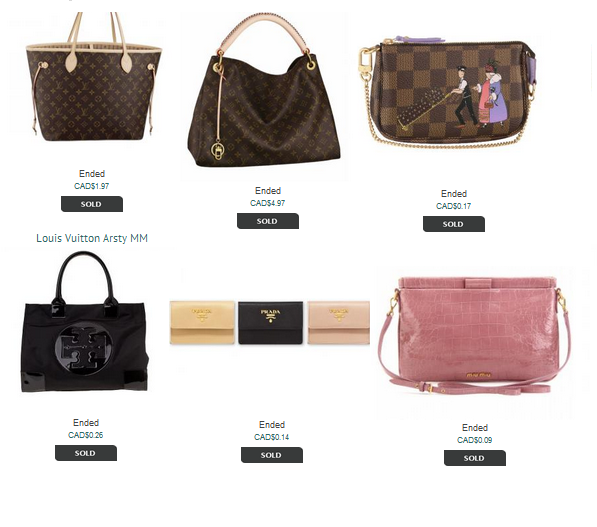 We just received notice of yet another penny auction site closing. Canadian based Riffington.com will stop offering penny auctions on March 4th. The site was launched in the summer of 2011 by a group of MBA students and even picked up some press in Canada, but they, like many others before them, were just not able to make it.

This penny auction offered a number of authentic designer fashion items and unfortunately for them they took in huge losses and practically gave away a lot of high quality designer purses with a Louis Vuitton mini purse recently ending for $0.17, a $700 Neverfull, $1.97.

The penny auction model at its current state is just not scalable, nor is it sustainable. If you were Riffington.com bidder who was able to win any of their great items with just a few bids consider yourself lucky. As is the case on nearly all penny auction sites, once a bidder “establishes” themselves as a strong bidder and won’t back down they are often likely to win a number of items from a lower trafficked penny auction site at very low prices. A major pitfall of penny auctions are the bidders who become “powerbidders” and win at all costs. Because this happens, penny auction sites like Riffington.com are unable to sustain the losses and are forced to shut down. It’s great if a bidder is able to become a “powerbidder” because they are more likely to walk away winning, but the sites end up losing if they can’t build a large enough userbase.

Not the first designer handbag site to shut down, OohiLove, FashionBay, TrendyPenny, LuxeWin, MyChampagneTaste, Dime-Divas, LuckyChic, and a number of others catering to designer fashion deal seekers have all practically given items away and had to go out of business.  Items that were offered on Riffington included handbags and accessories from coveted fashion brands brands like Prada, Marc Jacobs, Gucci, Louis Vuitton, and Tory Burch.

Just a glimpse at some of the deals that penny auction bidders got (= losses to the site) on Riffington:

The site experienced losses like this day after day.

Like Riffington’s MBA founder students, many entrepreneurs are hopeful when they set out to launch their very own penny auction site. Unfortunately many don’t last past the first 6 months and more consideration and research needs to be done before anyone launches a penny auction.

The shut down notice from Riffington.com as was received by one of their members: (Not sure why, but as a non-winning customer there I did not receive the e-mail.)

Did you bid on Riffington.com? Join the Penny Auction Watch forum and tell us what you think of this latest penny auction shut down.

That’s why online pharmacies is becoming more popular over the last years. Well-known are remedies which are used to reduce inflammation caused by inflammation of the skeletal muscle etc. There were only few examples. Did somebody tell you about canadian generic Viagra? Maybe you yet know about the question. Sexual disfunction can be a result of a physical condition. Even when it has a physical cause, psychological problems can make the disorder worse. Sex drive problems are so commonly a product of how you feel that there is some to that “headache” saying after all.