Interview with AnniesBid.com, the Penny Auction That Gives Back Turns 1! 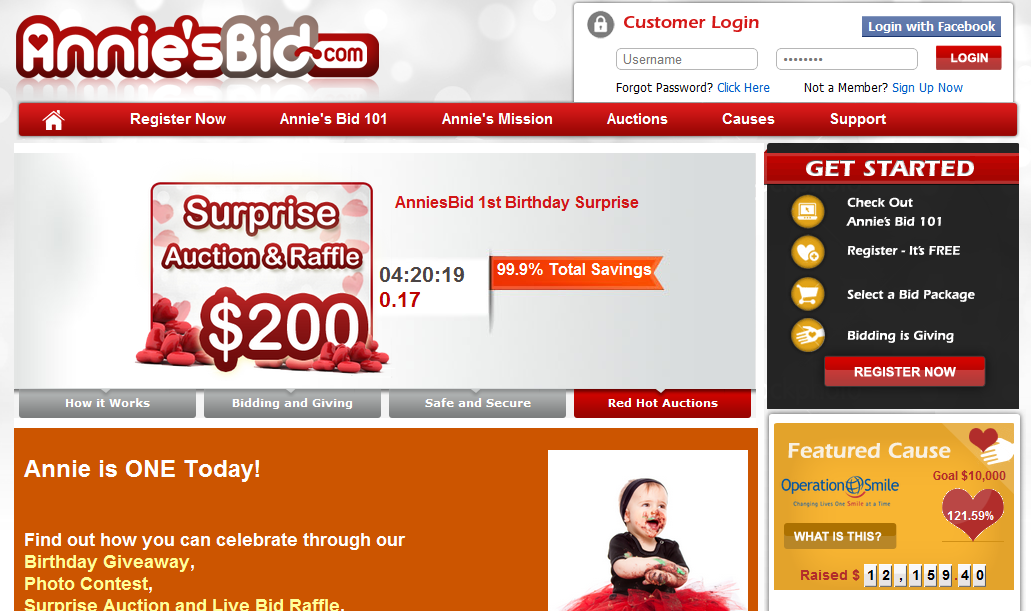 Have you had a chance to check out AnniesBid.com? AnniesBid marks one year of being in business today!

AnniesBid is a penny auction site that has set themselves apart from that of other sites with their charitable donation program and wide range of penny auction items for bidders to choose from from housewares to designer handbags, office, electronics, toys, recreation and gift cards.

In honor of this penny auction sites one-year anniversary AnniesBid is offering a number of promotions ending tonight at midnight est, new gift cards to bid on, a birthday giveaway, photo contest and surprise auction and live bid “raffle.”

Congratulations AnniesBid! Meet AnniesBid.com, and if you check them out be sure to come back here and share your feedback with us!

AnniesBid: Everyone on the AnniesBid team got involved with different motivations, but as a group, we’re all excited by new business models that make an impact on the world.

There is no denying that penny auctions or entertainment shopping have an initial allure for anyone – you see items closing for a few pennies and other items bid prices going into the stratosphere, and you wonder (as an owner or a bidder) how you could get a deal.

As we got to know penny auctions better, we started to see so many competitors and a lot of shortcomings in the model itself.  The need to constantly innovate and reinvent yourself every few months – possibly more rapidly than in any other e-commerce business – became apparent, as well.  On top of that, the industry hadn’t developed the greatest reputation toward the middle of 2011.

The reality is that as an owner or a bidder, you can’t expect windfall profits all the time.  If you do, you’re bound to get disappointed.  So you need to get involved in this business because you’re passionate about it in some way – either for the rush of a win, the social camaraderie, orsomething else.

We realized starting out that there would be major advertising and marketing challenges, and that you had to have a really good grip on the numbers.  But we also saw the sheer fun of it happening day after day, and we felt that if we could combine that with a deeper purpose, we’d have a unique, winning business.  That’s why decided to create a unique experience by creating a charity penny auction site combining charity giving, a little bit of gaming (i.e., our totally original Duel style auctions with bounty payouts), and a heavy emphasis on interaction with our bidders through social media that is helping us create a great community, too.

Penny Auction Watch: How long have you been open?

Penny Auction Watch: What kind of items do you offer/ have lined up?  Do your auctions run on a schedule?

AnniesBid: We have a heavy emphasis on gift cards, although we’re not primarily a gift card auction site – we also auction all the latest gadgets that we know our bidders would like to win, as well as home goods.

Penny Auction Watch: What are the timer increments between bids/does this vary by auction?

AnniesBid: All of our auctions currently feature a 15 second timer.  We have a mix of reserve and non-reserve auctions on our site as well as a totally unique reserve model.  Unlike other sites, we don’t set a random reserve or let bidders bid against themselves – if you are the last bidder of the day but the auction hasn’t met reserves, you actually get your bids back PLUS a bonus of 25% of bids placed as a reward for bidding early.

This has proven popular with bidders that are interested in better deals that standard penny auctions that don’t have bids back.  We hope new bidders take the time to learn these new auction styles in our AnniesBid 201 page.

Penny Auction Watch: How much do your bids cost?

AnniesBid: We do offer starter bid packs with bids that cost only $0.40.  Otherwise, they range in price from $0.55 in our largest bid pack to $0.70 in our smallest.   We do give away a lot of bids as part of our games, contests and promos  – again, making sure that you stay connected with us in Facebook or Twitter is important so you don’t miss out!

Penny Auction Watch: What are your shipping costs? How long does it usually take for users to receive their items?

AnniesBid: For physical items, our costs are comparable to UPS ground.  Gift cards usually ship for a flat $2.99 rate, although some cards have activation fees that we do pass on.  Bidders should read the auction detail page where the shipping costs are always detailed.  We also add a $1.00 transaction fee for any wins with a sale price below $10.00.

We usually ship 2 – 3 weeks after receiving payment for an item.

AnniesBid: At present, the United States and Canada.

AnniesBid: It depends!  We’ll refund whole, unused bid packs if someone purchases and changes their mind, provided they weren’t referred by someone else.  What we don’t do is – like most sites – is to refund used bids or bids in partially used bid packs.

Penny Auction Watch: Are there any win limits, limits /household?

AnniesBid: At present its 4 wins per week, two wins per day.  We also limit the retail value of items you can win per 30 day period, as well as the number of times you can win the same high value item (above $100).   We have some less common bid limits, too, on our Duel and Rolling Reserve style auctions that make more sense when someone has read and tried those types of auctions.  We recommend all of our bidders check up on the latest limits and rules by reading our AnniesBid 101 page, our contact page FAQ and our terms of service.

Penny Auction Watch: Is there a story behind the name/theme?

AnniesBid: Annie is our namesake and role model.  She’s fun and also charitable.  Annie isn’t a real person, but her good deeds and deals aren’t figments of anyone’s imagination.

At AnnieBid, our slogan is “Bidding is Giving” – what it means is that bidders always at Annie’s with our endless contests and giveways, with our deals, with buy it now, or with the fact that bidders help charities with a portion of what they’ve paid for each bid– with Annie, you really do win every day.

Penny Auction Watch: And anything else you’d like to add about your penny auction.

AnniesBid: We’re fun, we help great causes, we’ve been operating for a year and continue to grow – come visit us at AnniesBid.com and say hello – be sure to mention that you saw us on PennyAuctionWatch and ask for the latest deals – you never know what promos we have running!

Filed Under Penny Auction Interviews Tagged With anniesbid interview, anniesbid.com review, bidding, information, penny auctions
About the author: Connect with me on Google+
2 comments… add one

Previous post: SmartBidderz is Back – Is It Legit or a Scam?