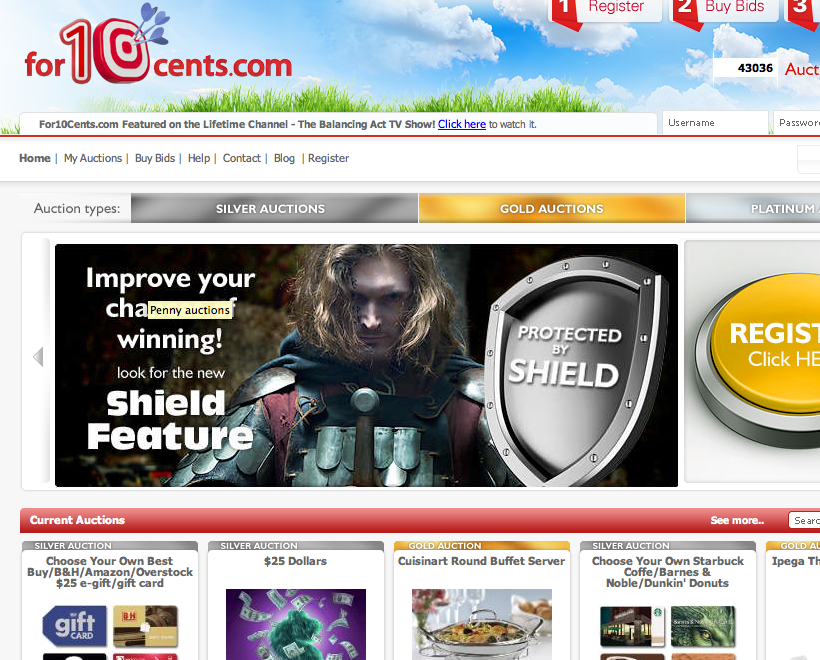 I was frustrated when I started this site back in ’09 after I had what I thought was a pretty good experience on a site that actually did shill bid, then I was scammed by an individual who thought it was OK to steal money from unsuspecting consumers who had hopes of winning a non-existent new car.

Now enough about my experiences, you can read about many of them and stories from other bidders here…and in our penny auction forum.

I’m just frustrated and tired of penny auctions that continue to offer items when they have a backlog of items owed to consumers.

Really? Seriously? What credible business sells a product or service and then fails to deliver?

So here we are in 2012 and for10cents.com is still offering items, yet we’re still receiving e-mails that look very similar to what we’ve heard about users of for10cents back in 2010.

Then there was that time when For10cents wanted to advertise on this site, we collected payment, installed the ad creatives only to find out, that very same day, that an employee/intern whoever it was, affiliated with for10cents was posting shill reviews. Of course that same day I refunded their ad payment and removed the ads.

Cheating in business won’t get you very far.

“For10cents penny auction  I have won many items from that site and yet to have received anything but the run around and same phoney answer everytime. It’ll just be a couple days as our financing is almost complete. Same words same BS story. Problem is I won so much in such a short time that they owe me in excess of $15,000.00 in merchandise and i want something done. How are they able to keep this up without the state stepping in. I hate government involvement but when you could us them where are they. the first item won was on in june of 2011 and won 4 items that month and received everything like it should be. Then about middle of sept 2011 I started to win and never received anything again from them again, to this date they owe me for 43 differnt items to the tune of approx $15,000.00. I’d be happy to jump on board for a suit against them.”

And it’s not that the government is not aware of penny auctions. Back in 2008-2009 penny auctions were a new concept. They’ve since gone mainstream. Nearly everyone I’ve talked to has heard about penny auctions either from a TV commercial or Internet ad.

By now a few big agencies have actually intervened and shut down a few sites that were ripping off consumers.

How about the SEC? The FTC? Attorney General?

Yep, all three are aware of penny auctions.

The State of Georgia actually shut down and fined penny auction site Wavee.com who owed items to consumers and failed to hold an auctioneers license (required in Georgia).

Then recently there was the Securities and Exchange Commission who charged MLM scheme penny auction site Zeekler with fraud and an emergency asset freeze to halt a $600 million Ponzi scheme on the verge of collapse. The Florida State Attorney General as well as the Washington State Attorney General have both taken action against scamming penny auctions, and well, as long as consumers are going to be ripped off by shady operators I don’t think the government is going to stop getting involved anytime soon, and rightfully so.

So what about for10cents.com and why is it that if they are still not shipping items to users who tell us they are owed a significant amount of money and the site is still waiting on “investments” why is it that they still have items up for bid?

Though I have noticed that the value of items up for bid are not as expensive as they used to be with $25 gift cards being the majority item up today.

Why is it that they have told winners that they’ve had to remove their reviews posted on our site or risk losing their owed items? Take this bidder’s story as a prime example, she was owed $11k items. This was back in 2010!

Earlier this year a bidder told us he wanted to start a class action lawsuit, he hadn’t received several items from the site and for10cents e-mailed,

“We were informed by our investors that they need additional time to close their financing round from which we are receiving our funds. The delay is caused by the enormous amount of new banking regulations which require way more time and effort to complete such transfers as compared to the past. We will receive an update within next 7 to 10 days and we will inform you about the progress promptly.”

According to a message on the homepage, “For10Cents.com Featured on the Lifetime Channel – The Balancing Act TV Show! Click here to watch it.”

So what’s the deal For10cents?

That’s why online pharmacies is becoming more pops over the last years. Well-known are remedies which are used to reduce inflammation caused by inflammation of the skeletal muscle etc. There were only few examples. Did somebody tell you about canadian generic Viagra? Maybe you already know about the matter. Sexual malfunction can be a result of a physical condition. Even when it has a physical cause, psychological problems can make the disorder worse. Sex drive problems are so commonly a product of how you feel that there is something to that “headache” saying after all.

Filed Under Hall of Shame Tagged With bad reviews, hall of shame, Penny Auction, penny auction for10cents, scam or legit
About the author: Connect with me on Google+
3 comments… add one

Next post: Interview with Owner of Penny Auction Site for Dream Dates