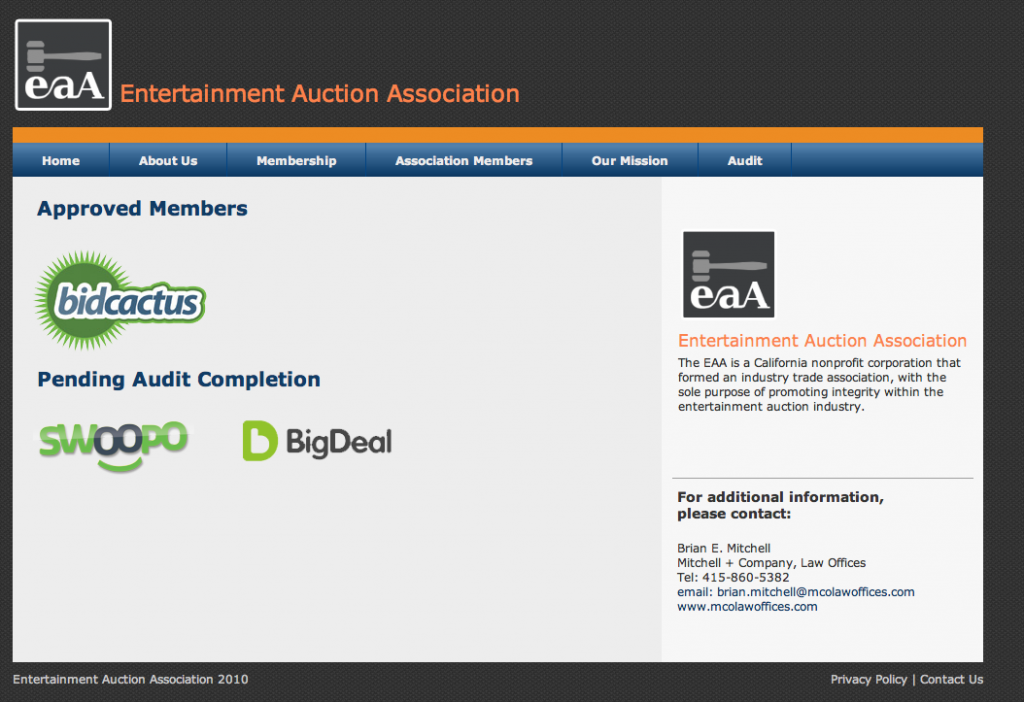 It’s been a while since good news was shared here on the penny auction industry, and I know a few critics have said this site is pretty negative, and unfortunately this is not without reason. There are shady operators that are, and have been, ripping consumers off and giving the entire penny auction industry a bad name. As a penny auction user you enjoy penny auctions, and you deserve to spend your money on an honest site. As a site operator you don’t deserve the illegimate sites to give your site a bad name, but you know that they do.

Today, we bring you good news,  and in my opinion the answer to the penny auction problem, the Entertainment Auction Association (EAA) has just been established!

“The EAA is a California nonprofit corporation that formed an industry trade association, with the sole purpose of promoting integrity within the entertainment auction industry.”

The Entertainment Auction Association will be run and directed by board members, officers, and a paid Executive Director, all of whom will oversee the activities of the Association and its members.

BidCactus is an approved member, they were audited by Ernst & Young in May, while BigDeal and Swoopo are pending audit completion.

The mission of the EAA is to promote integrity within the entertainment shopping penny auction industry and protect penny auction consumers.

“BidCactus.com is thrilled to be a founding partner of the industry’s first governing body dedicated to offering players a fair and just way to play penny auctions,” said Michael Staw, BidCactus.com CEO and Entertainment Association Co-Founder. “It is our hope that other penny auction sites will adhere to the principles and guidelines the Entertainment Auction Association has set forth in order to provide our players the best experience possible.”
”The founding of the association is an important step in strengthen the industry by weeding out those companies that engage in fraudulent behavior.  Our goal is to have customers feel secure that any company that is part of the association runs a website that is ethical, transparent, and safe to bid on” says Nicolas Darveau-Garneau, CEO of BigDeal.com.
“As the founder of the first penny auction site, Swoopo is concerned about the rise in fraudulent activity over the last two years and has decided to join forces with other credible industry leaders to battle this phenomenon by co-founding the EAA” said Frank Han, CEO, Swoopo.

The organization’s mission statement ensures that an EAA member will be performing business honestly and fairly. The code of conduct poses a strict set of rules, audits of members are a requirement and there will be fines for non-compliance.

Penny Auction Watch℠ strongly encourages legit penny auction sites to join the Entertainment Auction Association, as it will give users a sense of trust, as well as demonstrate that a penny auction site will do what it takes to further prove that an honest, transparent and overall good experience is being provided for all users.

The Entertainment Auction Association’s Mission & Code of Conduct, from http://entertainmentauctionassociation.com/mission.html:

To promote integrity within the entertainment auction industry through a strict code of conduct, audits of members, and fines for non-compliance. Specifically:

Before applying, all companies must represent, warrant, and agree:

Applicants must keep in mind that:

The Entertainment Auction Association  is calling penny auctions world-wide to adhere to its practices, governing bylaws and ethics. This new organization is definitely a step in the right direction and it could not have come at a better time.

For more information and to apply to become a member, visit http://www.entertainmentauctionassociation.com/.

That’s why online pharmacies is becoming more pop over the last years. Well-known are remedies which are used to reduce inflammation caused by inflammation of the skeletal muscle etc. There were only few examples. Did somebody tell you about canadian generic Viagra? Maybe you afore know about the matter. Sexual disfunction can be a result of a physical condition. Even when it has a physical cause, psychological problems can make the disorder worse. Sex drive problems are so commonly a product of how you feel that there is slightly to that “headache” saying after all.