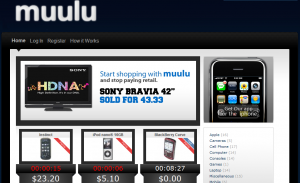 Vuulu.com’s script was up for sale a few months ago, read the conversation from an interested buyer of the Vuulu script  and the Vuulu/Muulu owner :

me: You developed the script yourself then? you’re done with vuulu.com? or just selling a copy of it

mike: just the domain alone is estimated at 1200 dollars http://www.websiteoutlook.com/www.vuulu.com we did alot of advertising

me:  I wont need the domain

me: can i ask who made the script?

mike:  yeah 4k on that which one

me:  hmm. the vuulu script why are ou done w/ it couldnt make any money?

mike:  no its still making some money not as much as before i made 3500 the first month its been dwindling down lately because im not advertising its not at around 100 a week i can show records if you would like

me: Sure Did you write the script then or buy it from a developer?

mike:  bought from a developer well no bought services from developer its custom not like i bought it turnkey

mike:  i designed it with somone else then got a quote for her to code it

me: oh you will still keep the vuulu site and just sell a copy of the script code?

me:  Nah I would have my own domain however

mike:  no its owned by me so there is no license

me: are you just abandoning the whole site then? or selling the script

me:  ah ok i see how difficult is it to set up?

mike:  not too hard are you savy or are you like 😐 like blank when it comes to this

me:  in the middleÂ I am not sure how to install it though what databases are reqd?

mike:  i have db for you i could install and make db for you if you want to send ftp info i can also provide hosting

mike: http://vuulu.com/buythisscript 285 i just made that for youÂ so its easy

me:  yeah i saw that 285 before umm. Interested but dont want to lose my a$$ on this

mike:  lowest id go is 245 i can show paypal money made off this site for past month

me: sure how many items have you sent out?

mike:  1 an ipod most the bots outbid the people make it look populated

me:  so has it been profitable?

mike: well i made as much money asÂ  i spent so nobut if your buying at this price then yeah you should make some money out of it

me:  i wouldnt need that shopping gateway you have i could use something else?

mike:  oh yeah spent 4k on that because i want to make a clothes thing

mike:  but thats kind of dissolving because i want to make this music site

mike:  yeah but not this script getting it coded from scratch

me:  have u had other inquiries already?

mike:  well actually yeah but no one bought they said like “still availible?” and never commented back well when your ready i’ll give you FTP info so you can download

me:  ok thanks, looking at the backend how do u do the autobidders?

mike: there on automatically you can disable or change like how much they bid up too

me:   oh really wheres that?

me:   yeah i see that but i dont see where to switch the autobidders on and off

mike: http://vuulu.com/admin/settings thats in config file also autpbiders bet against eachother wait wrong thing yeah in config file it says autobidders 1 just set to 0 if you want off but trust me you will not want off lol

mike:  because things will sell to people you dont want things to sell bots act as a reserve so items never sell you get money, and dont sell products

mike:  products never sell, you just get cash and they bid on products that you dont sell

Here’s a screenshot of the backend Â proof there were autobidding bots on Vuulu:

Here’s one of the dozen press releases for Muulu.com:

Burbank, CA – muulu is a new online bidding website that allows it’s members to bid on products for very low cost. In these economic times people are starting to use muulu to win products in auctions. They are then selling these items as soon as they receive them for instant profit. Some users are winning items at 95% off, and winning around 3-5 items per day.

muulu has just launched and has added a wide range of Apple iPods, and desktops to the mix for extremely low costs to celebrate the launch. Every day muulu sells brand new, top-name products at incredibly low prices in auctions due to it being pay per bid. Its 50 cents per bid, with free shipping. The total value of bids pays for the item allowing them to sell for example a iPod of 230 dollars for around 7 dollars in a penny auction.

Join while there is free shipping. At random some orders will be selected for free items. 1 out of 9 orders will get money back for there items.

muulu is a California based company that offers electronics products in auctions. Our main offices and storage facility are located at 557 South Glenoaks Blvd. in Burbank, CA. Copyright 2009 muulu. All Rights Reserved. Apple, and the Apple logo, are registered trademarks of Apple Computer in the U.S. and/or other countries.”

Here’s a screenshot of press releases for the late Vuulu.com:

More links regarding the Vuulu scam:

Muulu is now Â viral marketing (spamming) I thought this description was a bit ironic:

So there we have it folks, a prime example of a con artist using penny auctions to steal from entertainment shopping participants. Do not fall prey to this scam.

Filed Under Legit or Not? Tagged With muulu scam, vuulu
About the author: Connect with me on Google+
11 comments… add one