Does BidSlasher Bid & Win Their Own Items? Shill Bidding Alleged 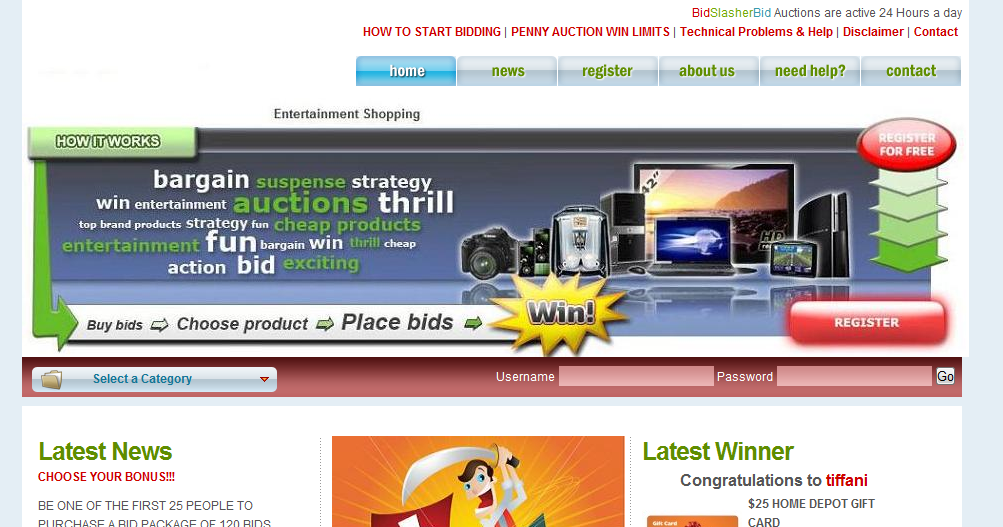 Have you bid on BidSlasher.com? Apparently 2 PAW forum members that share IP addresses with BidSlasher’s PAW forum account do, and they’ve won too.

First, let’s take a look at what our members have been saying about BidSlasher:

“Stuff goes SO low on this site, EXCEPT when I decide to bid. What is up with that?

“Yeah. I was able to win a 10.00 Subway and it came very fast. But now when I bid on anything, the whole site comes after me.”-thisonesmine

“I agree i bought a bids and when i bid it goes two times over retail….But everything else sales cheap…..I smell something funny here and i took a shower today…lol”-tywin7

“I am new to the forum but seen my name mentioned in here a couple weeks ago. I did try bidslasher.com as well. It is funny, in the beginning I bought a bid package and NO ONE was bidding against me, just maybe 1 bid here or there. The first weekend, I bid on a 32″ tv, didn’t really need it, but I had 200 bids and figured I would throw a few on it. I put the Bid butler on for 25 bids and the TV actually only ended for like $.58 or something like that. I received an invoice almost immediately and couldn’t believe I had won. Then I figured they would come up with something like, oh’ it was a glitch and instead of sending you the tv we are just gonna credit the bids, but really, I had a tracking number the next day and the tv in 3 days. I email them sometimes because I recommended that they lower their timers and another time I didn’t get my referral bids, but if you email them, they get back to you right away and seem pretty quick to fix the problem. I do like them, but they are definitely starting to get more users, so if they post another tv it might go for $1.00! lol!!!”-jerseyshore

“I gave up on Bidslasher. Everything i bid on after my 1st 2 wins (which were cheap) i have 5 or 6 bidders show up and drive price 2 or 3 times retail. I won 2 auctions on this site for 1 or 2 bids, but after that the price went way up. Everything over retail. Good luck.”-wilsonbs

“T.O.M.- i won very early in the site. I invested about $35 and won about $190 worth of gift cards. It has gotten harder to win some. I even questioned them about bots and they emailed me back very fast and said there is no way they will ever use bots. So i have watched them closely and i just dont see any,,IMO. there are a few bidders that have started to scoop up items. At least they have implemented a 3/5/12 win limit.
Maybe it may help users start winning again and hold the hogs at bay. LOL”-ggrahamlc

“chibrook, thanks for the quick response.
yeah, i have seen that name “revenge” a couple times on bidslasher.
I was watching their site to for bots, but I don’t see anything. seems like
a pretty good site. I might check out that other one this weekend to and if I do, I will make sure to put “revenge” as my referral.

I was gonna join now but am not sure, I think I might want to take advantage of that home depot promotion. wow, i thought they only give it to people that bought packages, but i just went back to the site and seen it advertised that they give them to everyone. I was able to scoop up a few referral bid from bidslasher as well. Did you see the stuff they have listed for Sunday. Figures, I won’t be around until late Sunday night. Family functions!!! Hey I am kind of new to this forum, only joined this week. Can you post on any forums if you know info about sites and bots, etc? I was a big freakin quibids fan until I started losing and losing after like the first 3 auctions were so easy,”

Just last month PAW members reported that there was a glitch observed on an item, the winner reported winning then reporting seeing that the winning username had changed to show “JerseyShore” as the winner. It does look like they resolved this issue.

The domain is registered privately with Domains By Proxy, the nameservers are set to bidapenny.info. Their script appears to be the “Net4Bids” clone script that we’ve seen can be acquired for under $10. We’ve found similar “Net4Bids” scripts to have the bot capability in the demo admin console.

Traffic: WebsiteOutlook.com states that bidslasher gets 65 pageviews/day on average (estimate). Alexa.com gives BidSlasher.com a three-month global Alexa traffic rank of 5,147,613. 5,147,613! That means that over 5 million sites are more popular than BidSlasher. To put this into perspective, Facebook has an Alexa ranking of 2, Google: 1. 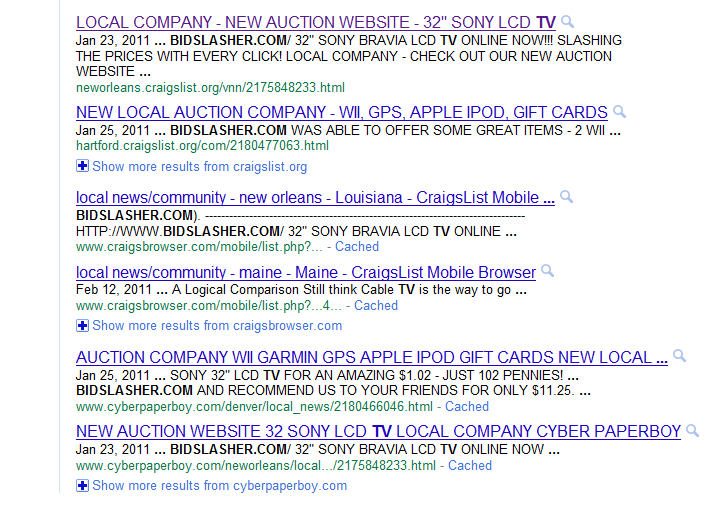 Neither BidSlasher’s terms & conditions nor their disclaimer, nor the about us page which is just a login page, state anything about the ineligibility of employees or relatives to bid. They do, however, state the following, “BIDSLASHER.COM reserves the right to cancel auctions that end due to, but not limited to, system error, bot bidders, employee bidders, technical problems, or any other reasonable reason.”

It might just interest you to learn that BidSlasher’s “biggest winner” actually shares IP addresses on the PAW forum with the PAW forum member “BidSlasher.”

“OUR BIGGEST WINNER – “JERSEYSHORE” WAS ABLE TO TAKE ADVANTAGE OF OUR 32″ SONY LCD TV AUCTION AND IS SCHEDULED TO RECEIVE THEIR TV TODAY!!!”-BidSlasher.com News 1/27/11

That’s not all, BidSlasher shares an IP with another PAW forum member who has also won on BidSlasher: TinaGriffi.

Take a look what TinaGriffi has posted on the PAW forum in not 1 but 4 unrelated threads:

Posted 1/27 in the Hay NixNutz Thread

HELLO EVERYONE,
I JOINED A NEW WEBSITE A COUPLE WEEKS AGO,
WWW.BIDSLASHER.COM. I HAD POSTED A THREAD ASKING IF ANYONE DEALT WITH THEM BEFORE I BOUGHT A BID PACKAGE. BEING THAT THEY WERE FAIRLY NEW, I WATCHED THE SITE FOR A COUPLE OF DAYS BEFORE ACTUALLY BUYING A BID PACKAGE.
I WAS SKEPTICAL BECAUSE THEIR BID PACKAGE PRICING WAS SO REASONABLE. IF YOU SIGNED UP LAST WEEK, YOU ALSO GOT A FREE WALMART GIFT CARD. I TRIED IT OUT AND BOUGHT A BID PACKAGE. I RECEIVED MY FREE WALMART CARD IN THE MAIL A COUPLE DAYS AFTER SIGNING UP. SO THEN I FELT A LITTLE MORE COMFORTABLE WITH THE SITE. THEIR WEBSITE LAUNCH DATE WAS LAST SATURDAY, 01/22/2011. I WAS ABLE TO BID ON A TON OF STUFF. THEY DIDNT HAVE TOO MANY BIDDERS, SO IT MADE IT EASY TO WIN ITEMS. I ACTUALLY DID WIN 3 AUCTIONS. 1 GIFT CARD AND 2 BIG TICKET ITEMS. I WANTED TO SEE HOW FAST THEY ACTUALLY ARRIVED. I RECEIVED CONFIRMATION THE NEXT DAY THAT THEY WERE PROCESSED AND WHEN I GOT HOME TUESDAY, UPS HAD LEFT ME A PACKAGE FROM THEM. I COULDN’T BELIEVE HOW FAST THE SHIPPING WAS.
IF ANYONE IS INTERESTED IN CHECKING OUT A NEW AUCTION SITE, DEFINITELY GO TO THIS ONE. WWW.BIDSLASHER.COM .
IT SEEMS THAT AS PENNY AUCTION COMPANIES HAVE BEEN RUNNING FOR A LITTLE BIT, THEY QUICKLY GET OVER-POPULATED AND IT IS SO MUCH HARDER TO WIN. THIS SITE WAS A BREEZE AND I ALREADY RECEIVED MY ITEMS, 2 DAYS AGO.
ALSO, ONE OF THE GIFT CARDS I WON, I ACTUALLY WANTED TO TRADE. I EMAILED THEM ON THE CUSTOMER SUPPORT PAGE AND ASKED IF I COULD TRADE IT. NOT EVEN 5 MINUTED LATER I HAD AN EMAIL SAYING THAT WAS FINE AND ASKING WHICH CARD I WOULD LIKE INSTEAD. SO THEY ALSO LET YOU TRADE YOUR CARDS AS WELL.

I just signed up at a new auction site www.bidslasher.com and it looks pretty cool.
They are giving free walmart gift cards to anyone that signs up and buys a bid pack.
I think they call them slash packs or something like that. I dont know how long their promotion is
running, but I think it said until Saturday. But I alsready got an email that said my free $10 walmart
gift card has already shipped. I didn’t know if anyone else has checked out this site yet?”

I tried bidpigs before but then I was losing too much money. I guess I became a penny auction addict.
I also tried a couple others. I think I am too eager of a bidder and then all my bids are gone before the item nears the end. However, my friend told me about a new auction site www.bidslasher.com on Monday. I went to the site and found their prices really cheap. My friend said they are offering promotions to gain customers and they were. I got a free $10 walmart gift card just for buying a bid pack and you didn’t have to buy the big bid pack. I got an email like 2 minutes later that told me my gift card is on its way. I bought some bids and am patiently waiting for the wii and garmin nuvi. I was hoping that since they are new, I would have a better chance. Has anyone heard about this site or purchased bids from them yet?”

I went on the new website this morning.
www.bidslasher.com for the first time.
I won a couple of gift cards in just minutes.
My mom signed up as well and she won a
Garmin Gps for under $1.00.
They do not have a lot of users on their site yet,
so it really benfits us right now.
Their bids are really cheap, so I bought a bigger
pack and only ended up using 23 bids to win 3
Gifts cards. I still have more left for tomorrow.
They have some good electronics too.
My mom won the Garmin GPS, but they had a Wii
that only sold for $ .07 and an Apple Ipod Nano that I
think went for like $ .10.
I would have bid on that but wasan’t home in time.
I never thought it would end so cheap so it didnt make
it to the minimum bid of my BidBuler that I had set.
Anyone looking for some easy wins should check them
out before their site gets overloaded like some of the others.
www.bidslasher.com

What have your experiences been with BidSlasher.com? Please, let us know!

Join our penny auction discussion board!