Has Everyone Been Talking About “the best penny auction website on the net” BlueBirdBids.com? MLM Marketing Tie – Is It Legit?

“Everyone is talking about BlueBirdBids and how it’s the best penny auction website on the net.” 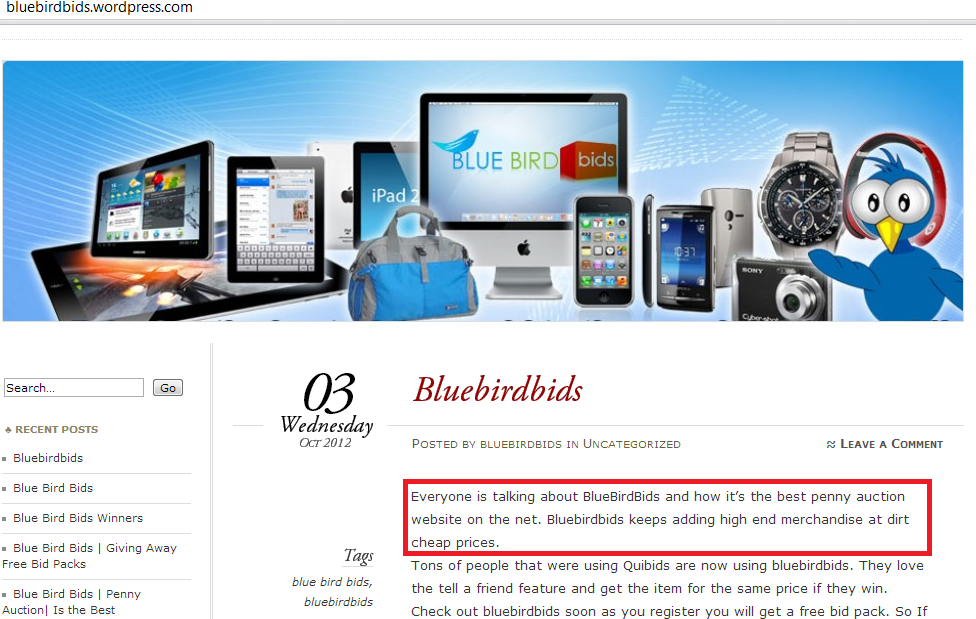 Since we are not too sure just who everyone is that has been talking about BlueBirdBids, nor have we read anywhere that it was the best penny auction website on the net, we need to know. Is BlueBirdBids.com a great penny auction site? Is it legit? 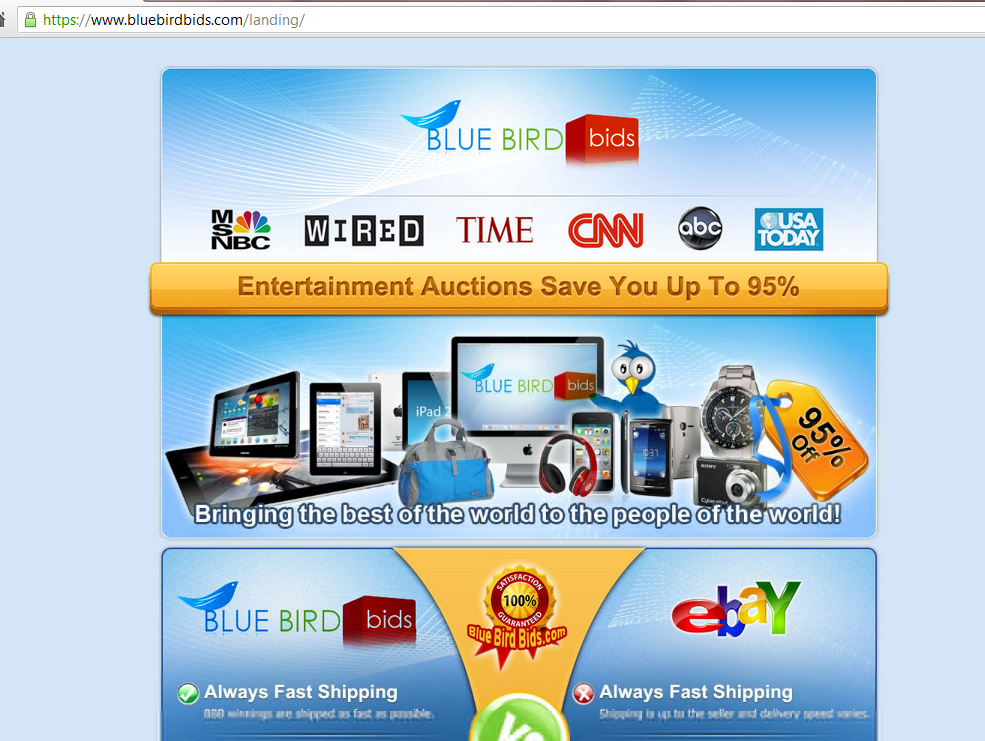 Was BlueBirdBids mentioned by Time, Wired, MSNBC, CNN, ABC, Wired or USA Today? Nope. Penny auctions were though, but should they be featuring the logos on top of their landing page appearing to seem to us, and other consumers, as if their site has been featured?

BlueBirdBids is a US Based Penny Auction – So why Malaysia and Colombia?

BlueBirdBids.com is a recently registered corporation based in the state of Nevada – Blue Bird Bids International, Inc with the registered agent being MD EGER.  (Mardy Eger)  One blogger, as has one of our forum members in the Thank You GreenAppleFridays thread, insists that there is a tie between BlueBirdBids.com and GreenAppleFridays.com, owned by Dwayne Golden. Blue Bird Bids Review: Zeek Rewards Ponzi clone which includes more info and this quote found of Mardy’s site, “Because of their Iron sharpening Iron relationship, both Mardy and Dwayne continually spiral higher toward more successful endeavors.”

While BlueBirdBids.com’s terms state, “Deliveries are made exclusively to the 50 states of the United States and Washington D.C.” according to Alexa.com, 43% of their traffic is currently coming from Brazil, users in Colombia are also visiting the penny auction site.

There are 734,487 sites with a better three-month global Alexa traffic rank than Bluebirdbids.com, and while the site is ranked #22,879 in Brazil, where we estimate that 43% of its visitors are… Show More

Interesting, GreenAppleFridays.com also has a good deal of traffic coming from the city of Medillin, Colombia. GreenAppleFriday’s owner has told us and states in the GAF blog that he has a son in Colombia, an entrepreneur that provides SEO services for GreenAppleFridays and other businesses, perhaps this explains the Colombia traffic correlation.

Why does BlueBirdBids’ source code includes tags for Malaysia and Malaysia online shop when they’re a US operating penny auction site? 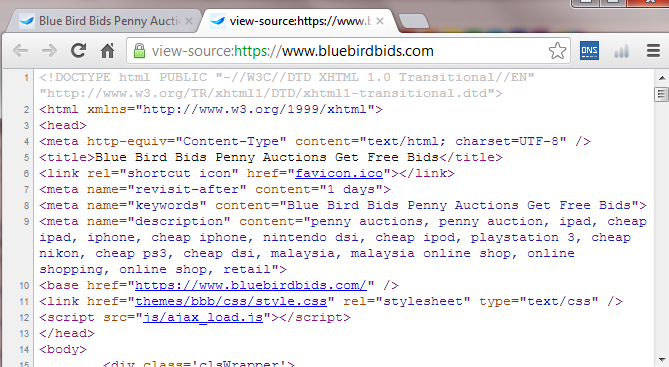 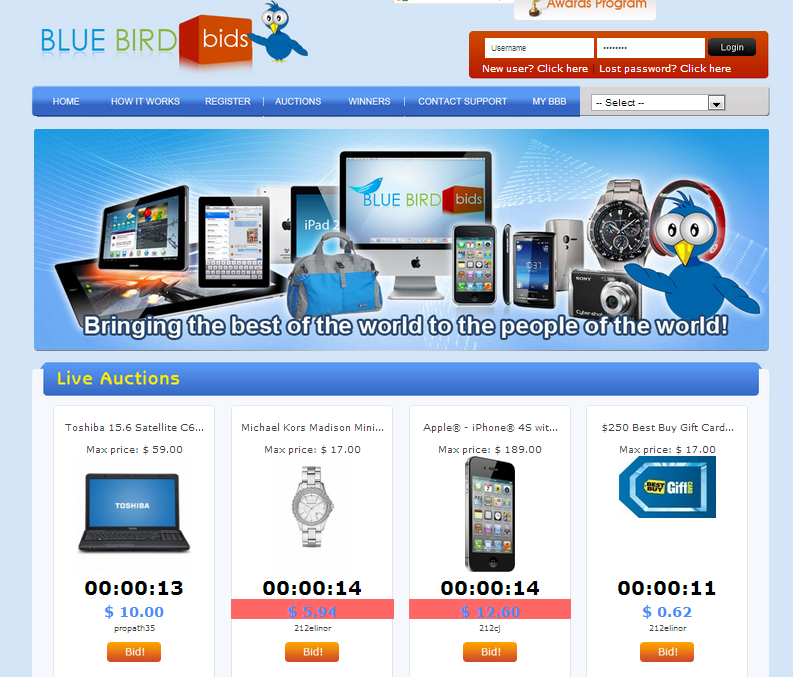 MLM Marketers Are Attracted to the Penny Auction Space

Zeekler was a penny auction site that also offeredBack in August Zeekrewards was found to be a $600 Million ponzi scheme and shut down by the Department of Justice/SEC.

The website BehindMLM (http://behindmlm.com/companies/blue-bird-bids-review-zeek-rewards-ponzi-clone/) has taken a more in depth look into BlueBirdBids’ MLM program:

Within the Blue Bird Bids penny auction there are two types of bids, retail and “revenue share” bids.

Revenue share bids are only available to affiliates and are sold in packs costing between $1000 and $25,000.

Note that whilst the membership fees are recurring, the recruitment commission is only paid out once.

The Global Bonus Pool is made up of 1% of the company revenue and is paid out quarterly.

Blue Bird Bids affiliates can earn shares in the Global Bonus Pool depending on which level of membership they buy in at:

The residual commissions in Blue Bird Bids are paid out using a 3×8 expandable matrix. A 3×8 matrix places an affiliate at the top of the matrix with three legs branching out from under them.”

Once affiliates reach specific recruitment goals, Blue Bird Bids reward them with a car of their choice.

If affiliates personally recruit 10 affiliates and have a matrix organisation of 500 affiliates (no more than 1/3rd being counted from any one matrix leg) who have all paid membership fees for at least three consecutive months, they can choose between three budget cars ranging in value from $46,000 to $50,070.

If affiliates personally recruit 10 affiliates and have a matrix organisation of 3000 affiliates (no more than 1/3rd being counted from any one matrix leg) who have all paid membership fees for at least three consecutive months, they can choose between three luxury cars ranging in value from $135,200 to $205,600.”

Ayy… Dubli has been running for many years now and also offers a MLM model. Zeekler’s ZeekRewards spurred tons of spammers “marketing” for Zeekler.com’s penny auction site. They even offered cars for auction, but was Zeekler a legit penny auction? Did you ever win and receive items? 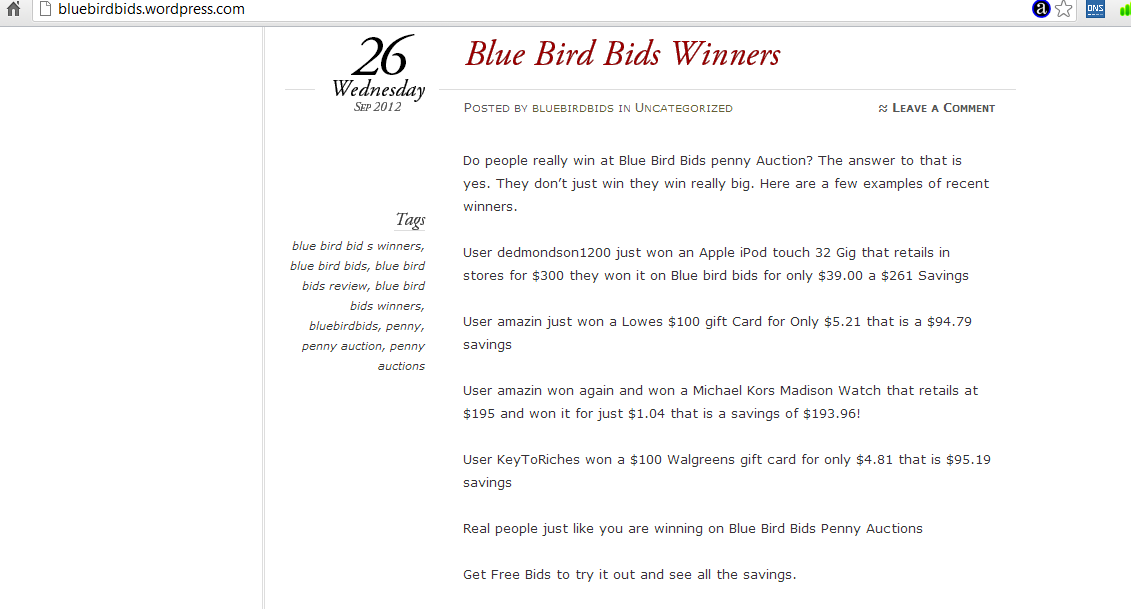 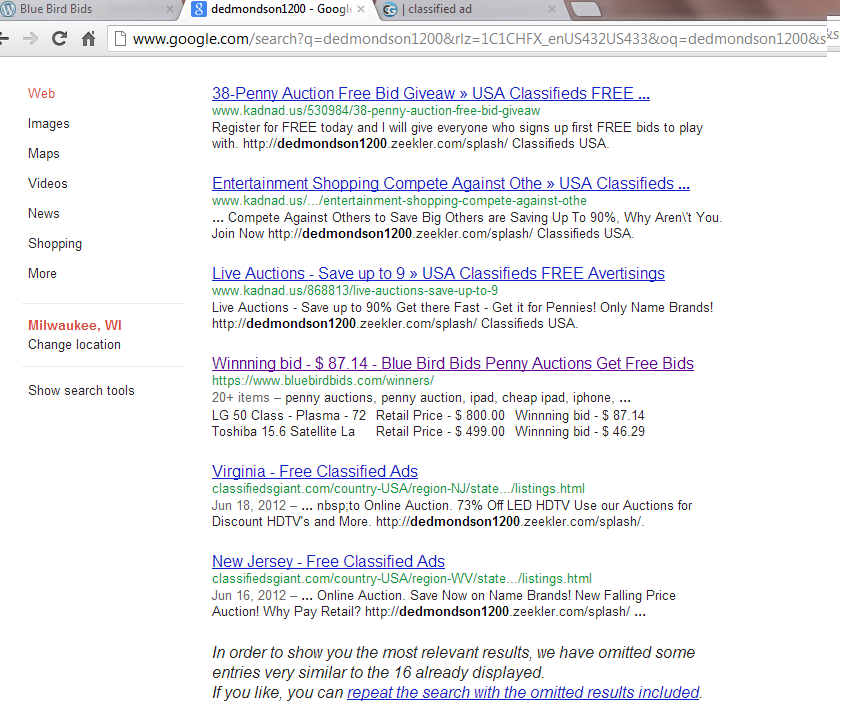 “Real people like you are winning” well we’d sure like to hope so, but why the emphasis on “real” people and why the boastful remark that “everyone” is talking about them?

I personally don’t care for multilevel marketing, and don’t believe that it’s the best way that penny auctions should be promoted, especially without properly educating and disclosing to consumers just how a penny auction works and the risks involved. Essentially, the multilevel marketers are compensated when consumers make bid purchases.

The problem I have with this is the way they are  telling consumers that they will win items at “dirt cheap prices,” (BlueBirdBids.Wordpress.com) when in reality winning a penny auction can end up costing much more money than the MSRP of the item up for auction.

The question that bidders want to know is, is BlueBirdBids.com a legitimate penny auction site? Have items been won and received by bidders? Join us and discuss this penny auction in the Penny Auction Watch Forum.

That’s why online pharmacies is becoming more popular over the last years. Well-known are remedies which are used to reduce inflammation caused by inflammation of the skeletal muscle etc. There were only few examples. Did somebody tell you about canadian generic Viagra? Maybe you already know about the matter. Sexual disfunction can be a result of a physical condition. Even when it has a physical why, psychological problems can make the disorder worse. Sex drive problems are so commonly a product of how you feel that there is some to that “headache” saying after all.

Filed Under Legit or Not? Tagged With bluebirdbids, Colombia, greenapplefridays, legit, malaysia, mlm marketing, penny auctions, scam
About the author: Connect with me on Google+
8 comments… add one

Next post: Why Do So Many Users Have “212” In Their Usernames on BlueBirdBids?

Previous post: 6 Ways to Be a Stronger Penny Auction Bidder