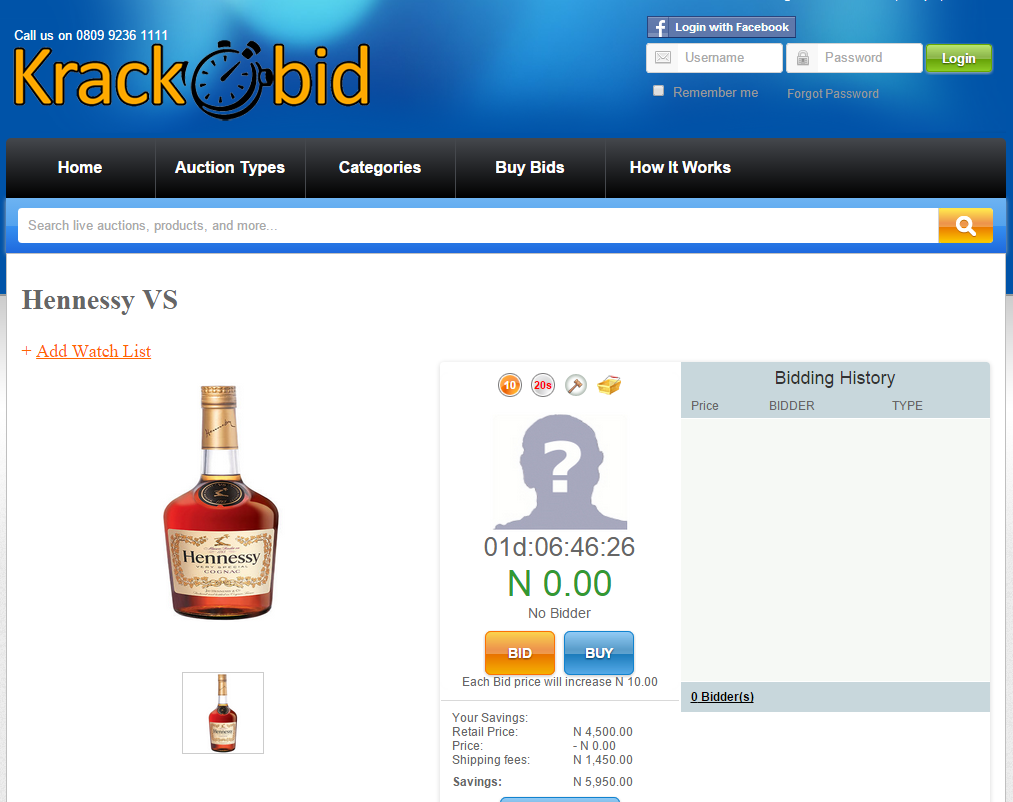 And not just any liquor.

Hennessy Cognac ‘Very Special’ with 40% alcohol content to be exact.

Not sure that that is even legal to do, at least I don’t think it is in the U.S.

How will the site even card the purchaser, or ship the cognac? That’s because the site isn’t located in the U.S. According to KrackBid’s terms & conditions they’re located in Nigeria.

Yep, this would be the very first penny auction we’ve seen enter the Nigerian bidding market.

KrackBid terms: “3.8 Shipping cost stated on an auction is for the 36 states of the Nigeria. Additional shipping charges may apply for other places.”

Maybe Nigerians like their cognac and want to save money on good ol’ Hennessy. There’s even a Hennessy Nigeria Twitter page – https://twitter.com/hennessynigeria

In fact, according to Tokini Peterside, Hennessy’s marketing manager in Nigeria, Nigeria is the largest market in Africa and the Middle East for Moet Hennessy (Moët & Chandon merged with Hennessy Cognac in 1971 and with Louis Vuitton in 1987 to become LVMH.) Looks like there’s a market for luxury in Nigeria, too. Amid Poverty And Fuel Riots, A Booming Luxury Market Has Opened In Nigeria – Read more: http://www.businessinsider.com/nigerias-luxury-market-2012-3#ixzz3bDrFiczs

Would you like to be able to bid on alcohol?

OneCentFlights.com – the auction for deals on travel that launched in 2013 owns a domain name OneCentWine.com. Does this mean they’ll start offering wine? Not sure, but if they do, you’ll hear it from us first.