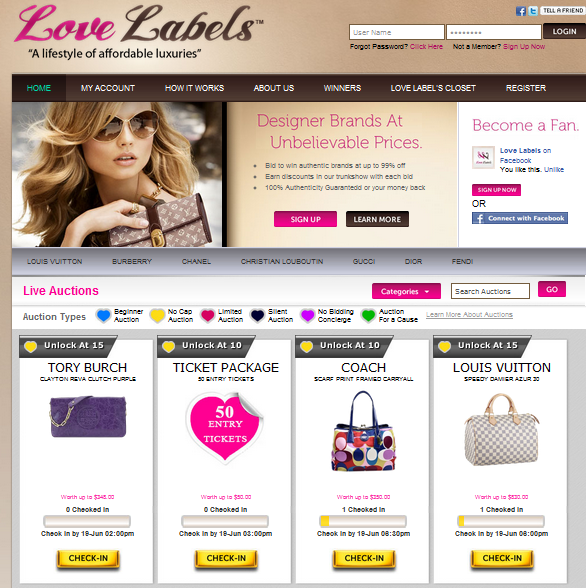 In case you’re unfamiliar with a seat auction, basically here’s how they work:

You purchase a specified number of credits for an item of your choice, then you wait until the minimum number of seats have been purchased, for the item to be “unlocked” and the auction time scheduled.  At LoveLabels.com the seats are called entry tickets, once enough tickets have been bought to reach the minimum to schedule the item, the auction time will be scheduled and you’ll have a chance to bid against others who have bought tickets to try to win. 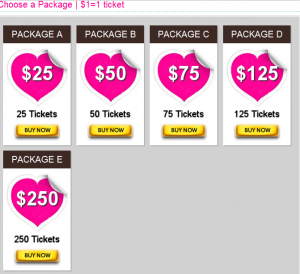 The good thing about seat penny auctions is that, if you decide to try LoveLabels, you won’t have to pay per bid, you’ll only pay for the chance to bid for the item and then the final end price and any applicable shipping fees (shipping appears to be free for their current line-up).

Auctions for a Cause donate a portion of to all proceeds to charity.

The unlocking of some auctions coincides with flash sales through the “Love It Now” option. If auctions aren’t one’s cup of tea, the same brand-name or other designer item also enters a flash sale, so be the first to snag it before someone does when the auction unlocks. The number of items per flash sale varies. Basically, it’s just bargains, bargains, bargains all day long.

Lovelabels also allows members to “shop” its Closet, the site’s section that works much like using arcade game ticket winnings to redeem prizes.

Members earn 1 Love Point for every 10 entry tickets they check into an auction, and it unlocks. They browse the Closet’s fabulous array of free gifts priced at different amounts of Love Points. It’s like being a kid again, only candy and stuffed animals are replaced with the season’s hottest fashions and toys for big boys.

LoveLabels has a variety of designer items up for sale, current items waiting to be unlocked include a Tory Burch Clayton Reva Clutch, a Coach Scarf Print Framed Carryall, the Louis Vuitton Speedy Damier Azur 30 and Gucci Sunglasses. 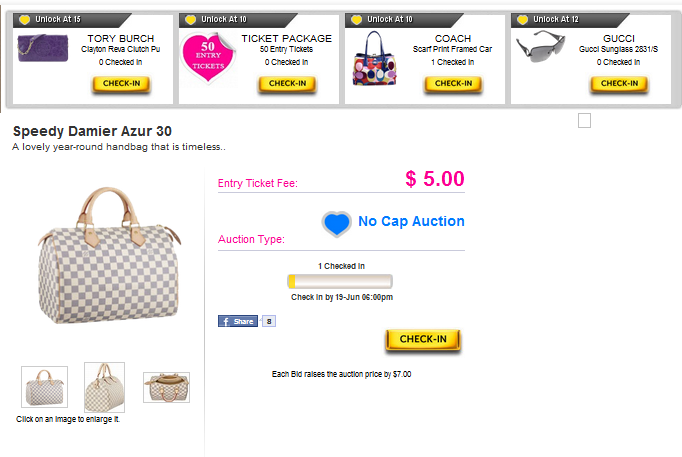 LoveLabels.com’s founder is the former actress and model, Victoria Vo is excited to launch LoveLabels to provide affordable, high quality items for everyone.

An entrepreneur,  Victoria has several successful launches behind her,including restaurant and spa concepts that evolved into franchises.

Victoria tells us that the first 10 auction winners will get a special free gift from either a wallet, jewelry, wristlet, or something else, included with their items.

LoveLabels.com was going to initially be a regular bid-fee penny auction site, but changed the format to allow users to bid for free after paying for item tickets.

If you decide to try LoveLabels just for signing up you’ll get 3 free unlock tickets. Let us know what your experiences are, post your review here or in our forum!