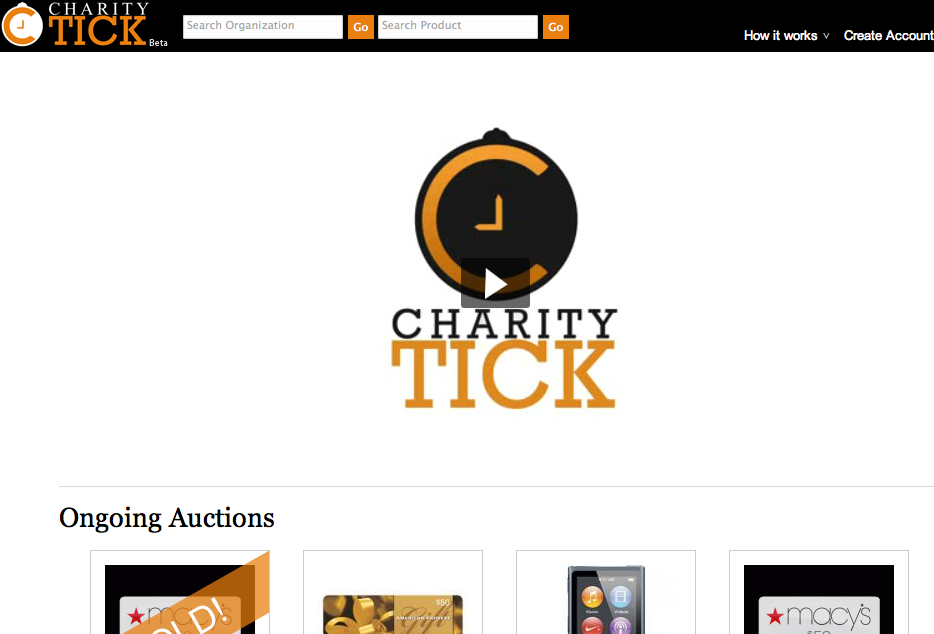 New penny auction site CharityTick.com has just launched.
According to CharityTick‘s website “Not only are charities the home for your bids, but it’s entirely up to you to choose your preference of Charity AND personally select the prize you wish to place your bid on.”

CharityTick has posted their site launch on IndieGoGo, the crowdfunding startup website with hopes of raising $52,500, they have so far raised $282.

From the IndieGoGo listing:

Were in the process of launching an auction platform that will enable charities to raise a substantial amount of money by auctioning items that were donated to them or even purchased at full price.
Here is how it works:
Unlike standard charity auctions, the goal of Charity Tick is to have organizations run their own auctions using our trendy auction platform. Bidders on such auctions purchase tokens at a price of $0.60 each. Each bid raises the price by a single penny. An item worth hundreds may end up selling for far less, but a final sale value of  $35.00 for an item such as an Ipod ($300 value) equals 3500 bids at $0.60 each meaning that the charity has raised $2,100. One person has won a cheap item and everyone else has donated anywhere from $0.60-$20.00 to the charity that has listed the item. Please see our video for a better example.

The money will be used to front $500 worth of products for the first 105 charties to be able to list items without any risk.”

There are a few informational/instructional videos on the penny auction site if you’re interested in learning more about this new penny auction.

“What I learned is that non-profit organizations have a very difficult time raising the needed funds to continue expanding with the needs of their dependents. I devised a plan to support these charities in their good work supporting others, and the result is CharityTick. ”

CharityTick is not the first site to launch with helping out non-profits in mind, active site AnniesBid allows users to donate a proceed of win amounts to charities of their choice, and there have been others that have since come and gone.

CharityTick’s penny auction offerings currently include an iPod Shuffle and iPod Nano with funds stated to be going to the Chabad House of Los Angeles, and Amazon.com gift card penny auction proceeds going to the organization “InsulinPumpers,” and a few other gift cards. Their site looks very familiar to that of the now shut-down penny auction site SharetheSpoils.com.

That’s why online pharmacies is becoming more pop over the last years. Well-known are remedies which are used to reduce inflammation caused by inflammation of the skeletal muscle etc. There were only few examples. Did somebody tell you about canadian generic Viagra? Maybe you already know about the problem. Sexual dysfunction can be a result of a physical condition. Even when it has a physical reason, psychological problems can make the disorder worse. Sex drive problems are so commonly a product of how you feel that there is something to that “headache” saying after all.