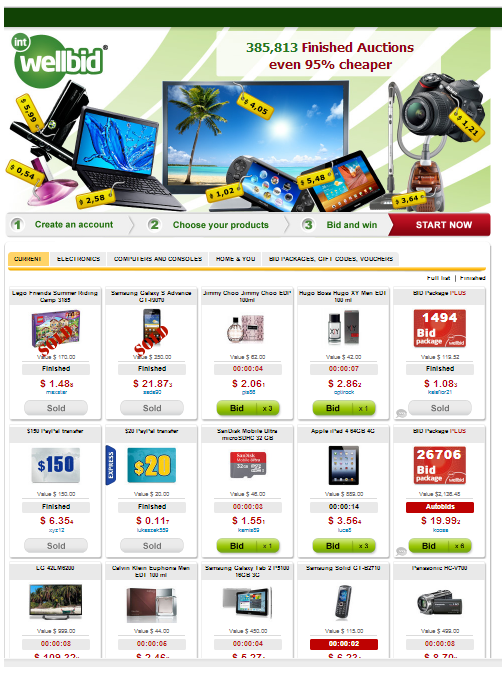 WellBid.com claims to have completed an absurdly high number of penny auctions, a banner on the top right corner of their website states: “385,813 Finished Auctions even 95% cheaper.”

Is WellBid a Legit Penny Auction?

Operator – Welmory Limited with its registered office in Nicosia (Cyprus) P.C. 1065 Arch. Makariou III, 2-4/703, formed under the laws of Cyprus and registered in the Ministry of Commerce, Industry and Tourism, Department of Registrar of Companies and Official Receiver Nicosia, under No. HE 245903

According to a LinkedIn page for Welmory Ltd the company owns other penny auctions as well as WellBid in a number of other countries and languages. Each site claims to have offered the same 385,813 completed auctions, but the active items all all different across each site.

Their domain products include the following:

“The Operator of the Service is the company Welmory Limited with its registered office in Nicosia (Cyprus) P.C. 1065 Arch. Makariou III, 2-4/703, formed under the laws of Cyprus and registered in the Ministry of Commerce, Industry and Tourism, Department of Registrar of Companies and Official Receiver Nicosia, under No. HE 245903 with an initial capital of 1,001,000 EUR (one milion one thousand euro), conducting auctions in Europe (United Kingdom, France, Italy, Hungary, Poland, Czech, Slovakia, Spain, Portugal, Russia), Asia, and the Americas. WellBid.com Service is systematically developed. Our goal is to offer users the most interesting forms of competition for exhibited items as well as to provide the most attractive prices of items and services auctioned.”

According to Alexa, WellBid’s traffic ranking is 305,237. WebsiteOutlook says the site is hosted in Poland at Beyond.pl sp. z o.o data center and is “most popular in the United Arab Emirates.”

Have you bid on WellBid?  One bidder claims to have won items but not receive them:

The following review was posted to ScamBook:

An online auction site for which you purchase bids which are then used in auctions. If you win the auction, you pay the current bid price (in addition to the cost of the bids used) and any postage specified and then should receive the goods.

But you don’t get the goods and they never reply to emails, messages sent via their help pages or even to the dispute resolution service run by PayPal (through which the payments are made).

A quite sophisticated scam; the clues are there that it probably is a scam (bad spelling and grammar used throughout the site) but the use of PayPal lends it an air of respectability – that’s what fooled me.”

Do you have a similar less than favorable experience with this penny auction site? Let us know, discuss WellBid and all penny auctions with us in our Penny Auction Forum!

That’s why online pharmacies is becoming more pops over the last years. Well-known are remedies which are used to reduce inflammation caused by inflammation of the skeletal muscle etc. There were only few examples. Did somebody tell you about canadian generic Viagra? Maybe you along know about the matter. Sexual disfunction can be a result of a physical condition. Even when it has a physical why, psychological problems can make the disorder worse. Sex drive problems are so commonly a product of how you feel that there is something to that “headache” saying after all.

Filed Under Legit or Not? Tagged With cyprus, legit or not, Penny Auction, reviews, wellbid
About the author: Connect with me on Google+
36 comments… add one