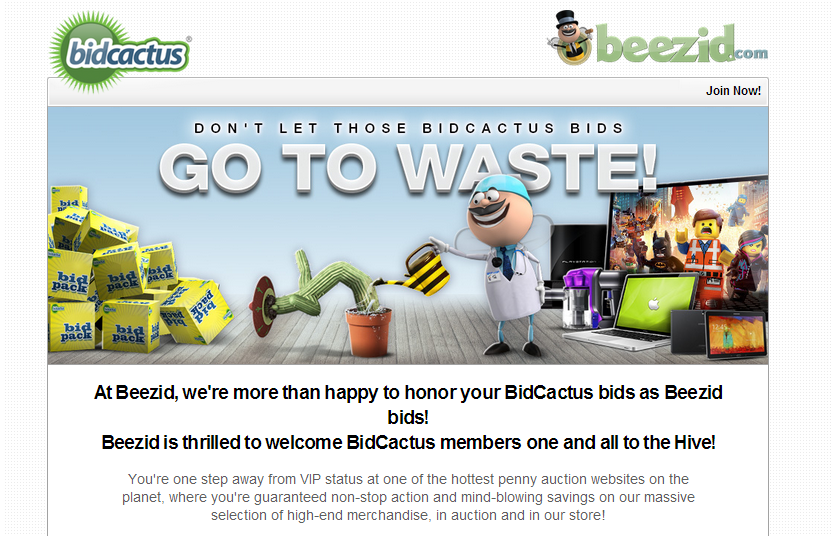 BidCactus, once one of the longest standing penny auction sites on the Internet has just shut down.

Is this a sign of the further downfall of the once buzzing penny auction industry? Rife with controversy, misunderstanding due to faulty marketing tactics and fraud by shady operators, this is just one of many sites to shut down, penny auctions seem to be a fast passing fad. Sad, since it was one of the top sites. Early last year Penny Auction Watch members reported dissatisfaction as a result of  a slow down of item fulfillment by the site.

BidCactus.com had been around since 2009 – with their domain and development beginning in 2008. The owner and CEO, Michael Staw from Westport, CT. Prior to BidCactus, Staw founded RealTime Gaming an online casino gaming company. In the penny auction sites first year they took in over 10 million bids, but it seemed to be all downhill from there. Citing Staw in an interview with BizJournals.com from an interview in 2010, it’s  “a wasteland of failed penny auction startups.”

“To anyone who thinks they can take $10,000 or $20,000 and cash in on the penny auction gold rush, I say, do your homework,” Staw says. “Find out how much it costs to get the critical mass of traffic.

I would say the unreliability of the industry, combined with its lack of transparency, challenge to continously make a profit,  and less-than-honest marketing techniques, all penny auctions have been given a bad name and there’s a lot of stigma associated with trying them now. Penny auction bidders have found ways to game the system and clean out penny auction startups and established sites.

“At Beezid, we’re more than happy to honor your BidCactus bids as Beezid bids!”

That’s why online pharmacies is becoming more pop over the last years. Well-known are remedies which are used to reduce inflammation caused by inflammation of the skeletal muscle etc. There were only few examples. Did somebody tell you about canadian generic Viagra? Maybe you yet know about the matter. Sexual disfunction can be a result of a physical condition. Even when it has a physical why, psychological problems can make the disorder worse. Sex drive problems are so commonly a product of how you feel that there is some to that “headache” saying after all.