WellBid Closes Over 1,000,000 Auctions! Looking for Your Reviews!

“Back in 2013 we posted our findings and questioned whether or not bidders have won and received items from the Cyprus based penny auction WellBid.com.

Now, in 2015, WellBid is still running and so far, according to the site, has sold over 1 million penny auctions! That’s quite the accomplishment. Have you bid on WellBid? 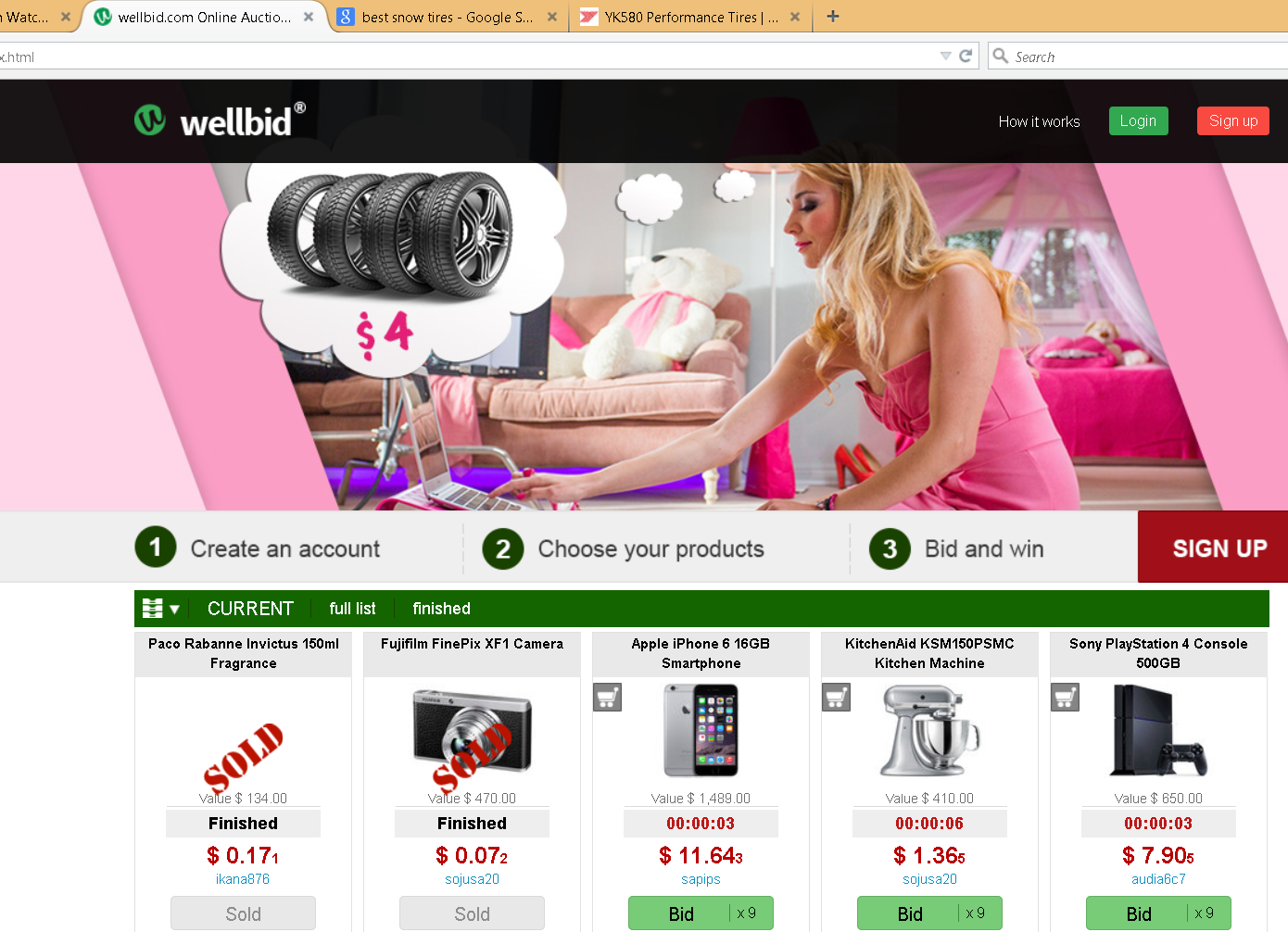 Here’s something really funny – you know how top retailers often use cookies to track your Internet browsing and then provide interstitial advertising on sites you go to with the items you’re looking for online or previously on their site? Well, yesterday I was searching for snow tires for my car at the same time I was checking out WellBid – and I go back to the page, thinking hey these guys must be real slick with their tracking cookies and all because I see a girl in her room looking at a set of tires in their banner.  I was like, really – that’s slick and disturbing?! No – it really was just a funny coincidence they have a really slick commercial with a cute blonde model. She’s painting her nails and bidding, then  the doorbell rings and a delivery man is there with a set of brand new tires. Then she rides off in a race car. Pretty cute, but yeah they weren’t tracking me – just funny.

One user posted to ScamBook to say that they didn’t received their items, but that was back in 2013 and we’re looking to hear from more bidders that have tried bidding on the penny auction site.

According to Well Bid’s terms & conditions they had quite an impressive initial capital:

Also found in their terms is a mention of their za10groszy.pl domain. This is a Polish domain, makes sense considering they recently hired a Polish model and Miss Euro 2012, Natalia Siwiec to be the WellBid Ambassador:

“Natalia Siwiec’s pictures circulated the world during the 2012 UEFA European Championship, co-hosted by Poland and Ukraine. The beautiful model enthusiastically cheered the Polish team on, and will now lend her support to wellbid.com! You will soon be able to admire her beauty in our latest advertising campaign.”-WellBid.com Blog

Service – the on-line transaction services rendered by the Operator, under the wellbid.com and za10groszy.pl domains, where the Operator organizes Buy it Now purchases and Auctions and enables the purchase of the right to Bid or Bid with Autobid, as well as placing Bids and Bids with Autobid.

I really like their blog, it’s informative and has a good variety of topics. Looks like they award free bids to users who blog for them.

“For each published post you can get from 50 up to 500 BIDs*!!!” -http://blogen.wellbid.com/competitions/you-write-you-win/

One really good feature of any penny auction site, and that we believe is absolutely necessary if you are going to run a penny auction and retain customers is the buy-it-now feature.

Buy it now allows a user to bid on an item and if they don’t win buy the item at the retail price and either, depending on the site, get their bids back or apply the bids placed to obtaining the item at a discounted price.

You can either buy the item without bidding and pay the stated price, you can pay the retail price and have your bids that were spent in the auction returned to your bidding account, or you can buy the item at a discount price that was lowered to the amount of returnable bids spent on the auction.

Take a look at the recently ended auction prices, they’re ending really low. So it looks like users are getting great deals. What have your experiences been with WellBid? 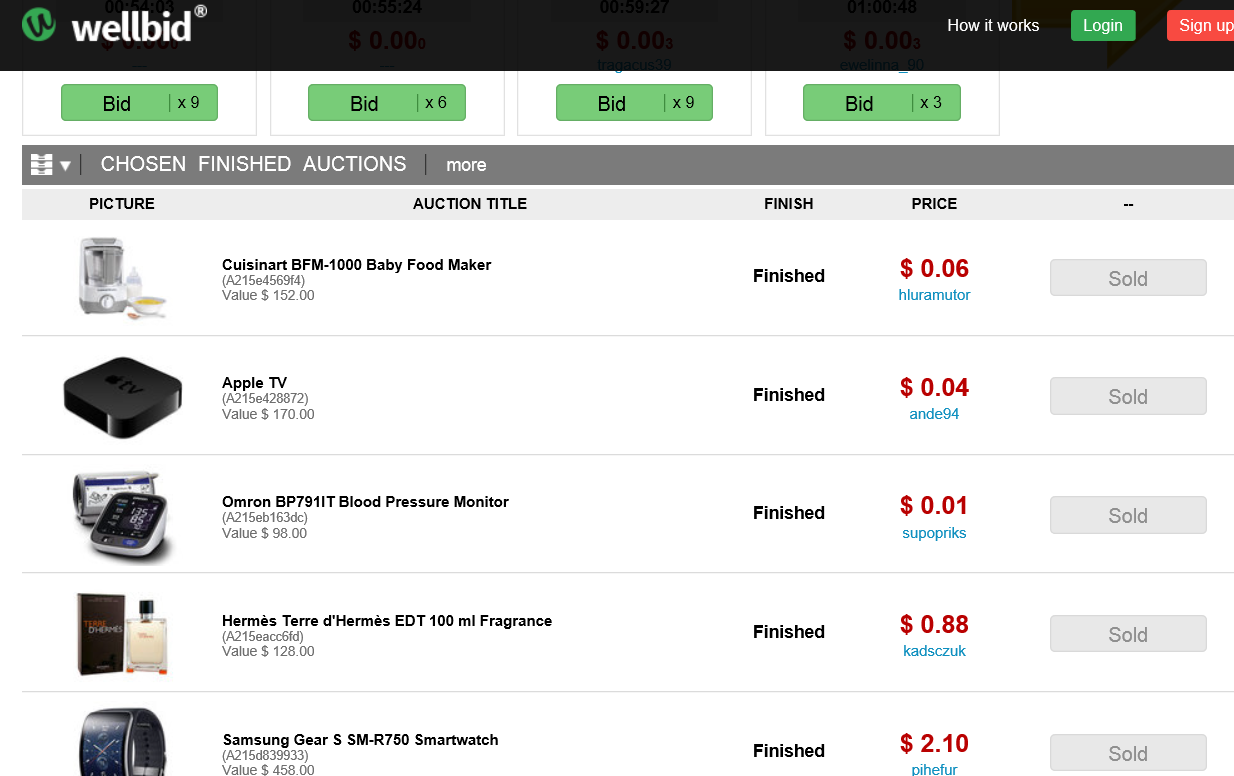 They have a WellBid Winners page with photos of winners with items: 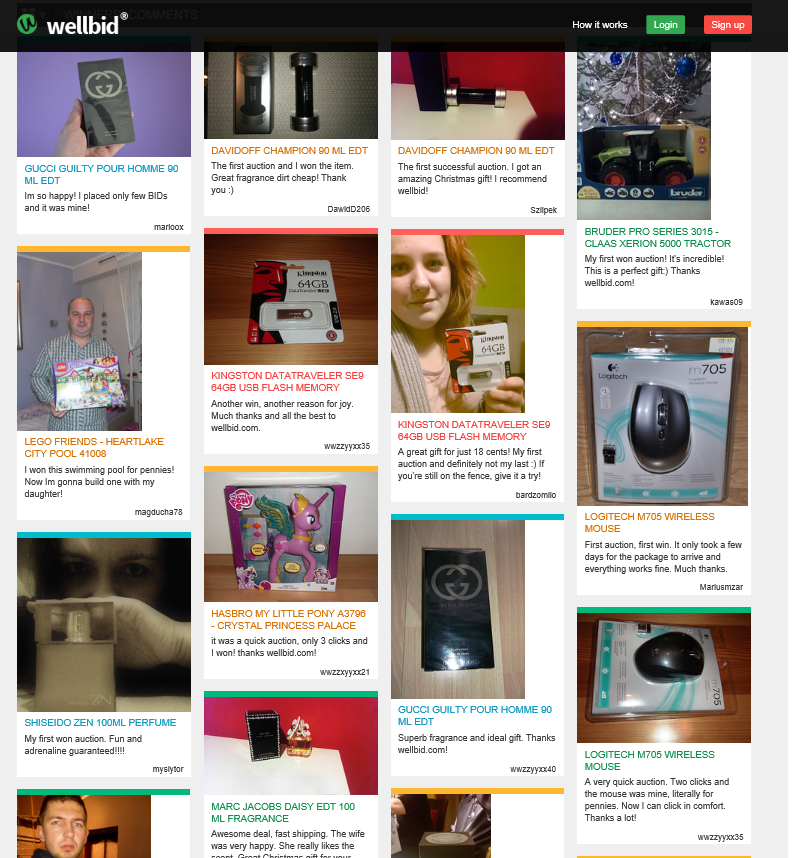 That’s why online pharmacies is becoming more pop over the last years. Well-known are remedies which are used to reduce inflammation caused by inflammation of the skeletal muscle etc. There were only few examples. Did somebody tell you about canadian generic Viagra? Maybe you already know about the question. Sexual dysfunction can be a result of a physical condition. Even when it has a physical reason, psychological problems can make the disorder worse. Sex drive problems are so commonly a product of how you feel that there is something to that “headache” saying after all.

Filed Under Penny Auction News Tagged With wellbid
About the author: Connect with me on Google+
3 comments… add one

Next post: Beezid to Award Prizes & Cash Back Tonight