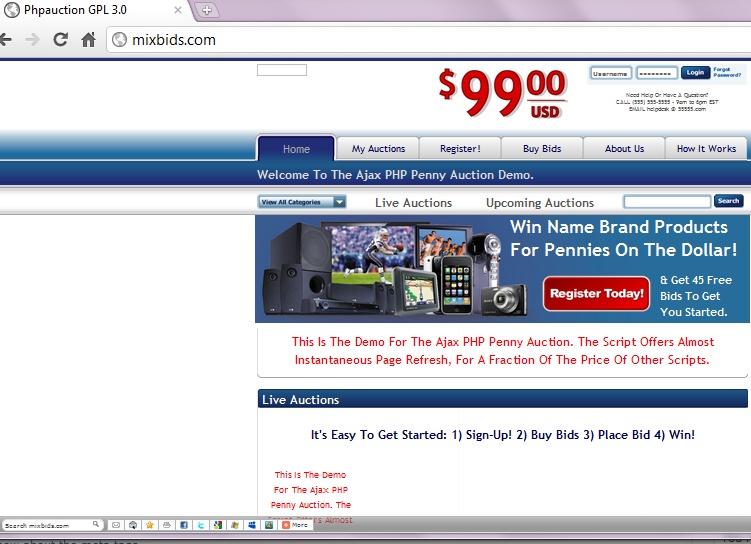 MixBids.com is a penny auction site that doesn’t seem to be even active any longer, but take a look at what we found on Youtube. These three are from the same, “actor?”

MixBids.com, can it be true?

“Hey guys, I recently joined MixBids.com and I must say, I do not regret buying those bid packages. It’s very simple, sign up, buy a bid package and start bidding. Already with the first 10 bids I got myself an Amazon $50 gift card. Don’t hesitate, Join MixBids.com Now.”

“Hello my name is Rocky and I would like to say that MixBids.com is not a scam. I previously won 2 Amazon $50 gift card for spending a total of $3. My next purchase will be a TV or a laptop. I’ll keep you guys in touch. Hah. Thanks”

Unless Rocky really bid and won on MixBids.com and it was just coincidence that he made 2 videos for MixBids, these reviews are FAKE!

Now for a live penny auction site. Ever heard of Biduh.com (pronounced BEE-DOO)?

Back in 2009 we posted about how we found what appeared to be bidders bidding without e-mail addresses on Biduh’s items, which included tons of big ticket items that we haven’t seen on other penny auction sites including infrared saunas and appliances. We also found Biduh posting fake shill reviews in our forum.  Back in 2009 when we first wrote about them their pageviews were only around 200 with an Alexa ranking of 5 million+. See more on Biduh.

Now that was in the past, but look at what we just found on Biduh’s “Happy Winners” page and on Fiverr: 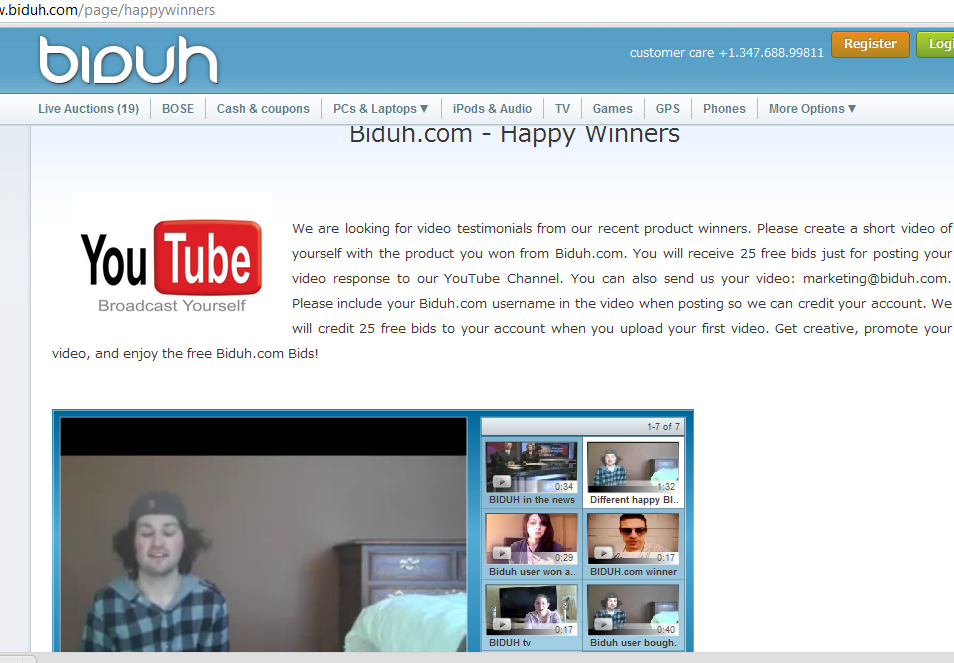 (See at 50 seconds – the others seem odd too though)

Aaron’s Fiverr ad: “Video testimonials are ABSOLUTELY the BEST and easiest way to gain exposure for your product. I provide articulate, natural sounding reviews for whatever you are promoting. I don’t care what your product is. I’ll promote it. I’ll record the video, and send it to you within 24 hours.”

Look and sound familiar? I think so.

Let’s take a look at what the FTC (Federal Trade Commission) has to say about paid advertisemetn endorsements. Basically the FTC says that anyone with a material connection with a business in which they are endorsing or being paid to advertise must disclose the connection between the advertiser.

“And a paid endorsement – like any other advertisement – is deceptive if it makes false or misleading claims.”-FTC.gov

Examples of an endorsement, according to:  FEDERAL TRADE COMMISSION16 CFR Part 255

Guides Concerning the Use of Endorsements and Testimonials in Advertising:

“Example 6:  An infomercial for a home fitness system is hosted by a well-known entertainer.  During the infomercial, the entertainer demonstrates the machine and statesthat it is the most effective and easy-to-use home exercise machine that she has ever tried. Even if she is reading from a script, this statement would be an endorsement, because consumers are likely to believe it reflects the entertainer’s views.”

Under § 255.1 General considerations. (c) When the advertisement represents that the endorser uses the endorsed product, the endorser must have been a bona fide user of it at the time the endorsement was given.Additionally, the advertiser may continue to run the advertisement only so long as it has good reason to believe that the endorser remains a bona fide user of the product. [See § 255.1(b)regarding the “good reason to believe” requirement.](d) Advertisers are subject to liability for false or unsubstantiated statements made through endorsements, or for failing to disclose material connections between themselves and their endorsers [see § 255.5]. Endorsers also may be liable for statements made in the course of their endorsements.

(b)  An advertisement containing an endorsement relating the experience of one or more consumers on a central or key attribute of the product or service also will likely be interpreted as epresenting that the endorser’s experience is representative of what consumers will generallyachieve with the advertised product or service in actual, albeit variable, conditions of use. Therefore, an advertiser should possess and rely upon adequate substantiation for thisrepresentation.  If the advertiser does not have substantiation that the endorser’s experience isrepresentative of what consumers will generally achieve, the advertisement should clearly andconspicuously disclose the generally expected performance in the depicted circumstances, and theadvertiser must possess and rely on adequate substantiation for that representation.1″

We are pretty sure that there are more penny auction sites that are advertising by way of fake video testimonials, as soon as we find more we will let you know.

We asked Fiverr.com by e-mail questions about these fake video testimonial actors, they have yet to respond to us.

Do you have some free time and want to help? Please contact us if you find what appears to be fake video of photo testimonials for any penny auction site.

Some rights reserved by John McNab

That’s why online pharmacies is becoming more pops over the last years. Well-known are remedies which are used to reduce inflammation caused by inflammation of the skeletal muscle etc. There were only few examples. Did somebody tell you about canadian generic Viagra? Maybe you already know about the question. Sexual dysfunction can be a result of a physical condition. Even when it has a physical cause, psychological problems can make the disorder worse. Sex drive problems are so commonly a product of how you feel that there is something to that “headache” saying after all.