Have You Seen These People at Any Other Penny Auction Site? Hint: Their Names Change

What’s an affiliate program? Basically, affiliate programs are agreements in which an online merchant (in this case a penny auction site) pays an Internet marketer to send them traffic. Affiliates get special links and landing pages to promote and in turn will receive a commission if a sale is made. Some affiliates pose to be bidders of penny auctions, but many aren’t even bidders themselves.

For quite some time affiliates seem to have been using what appears to be recycled landing pages that have been used in the past to promote other online penny auctions, many of which are now out of business.

Even if these penny auctions are legit marketers are making them look bad.

Will either of these penny auctions offer a 2011 Porsche Boxster or a 2011 Infinity G37? 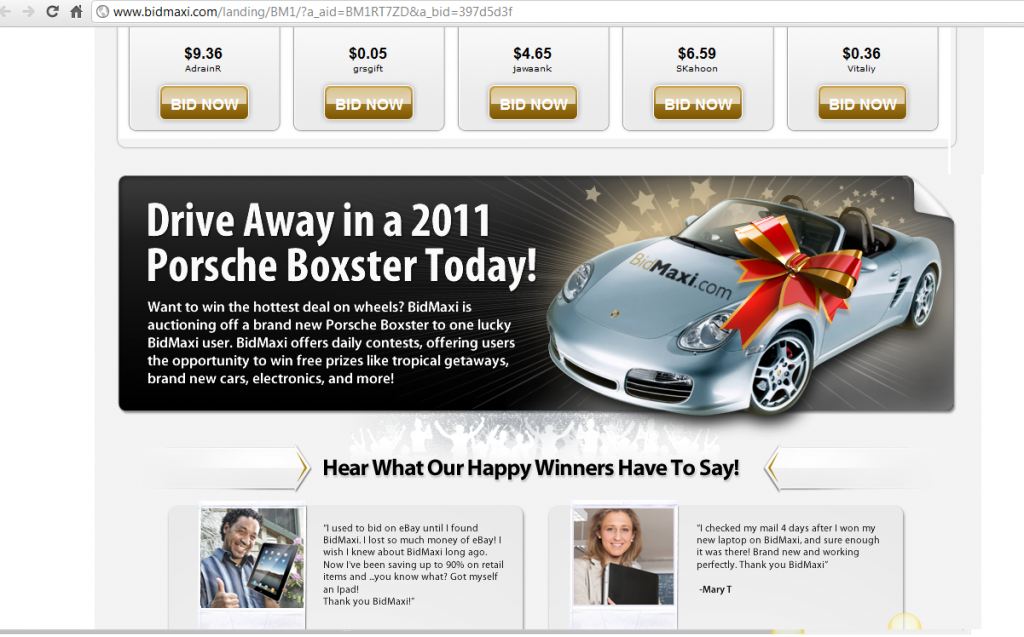 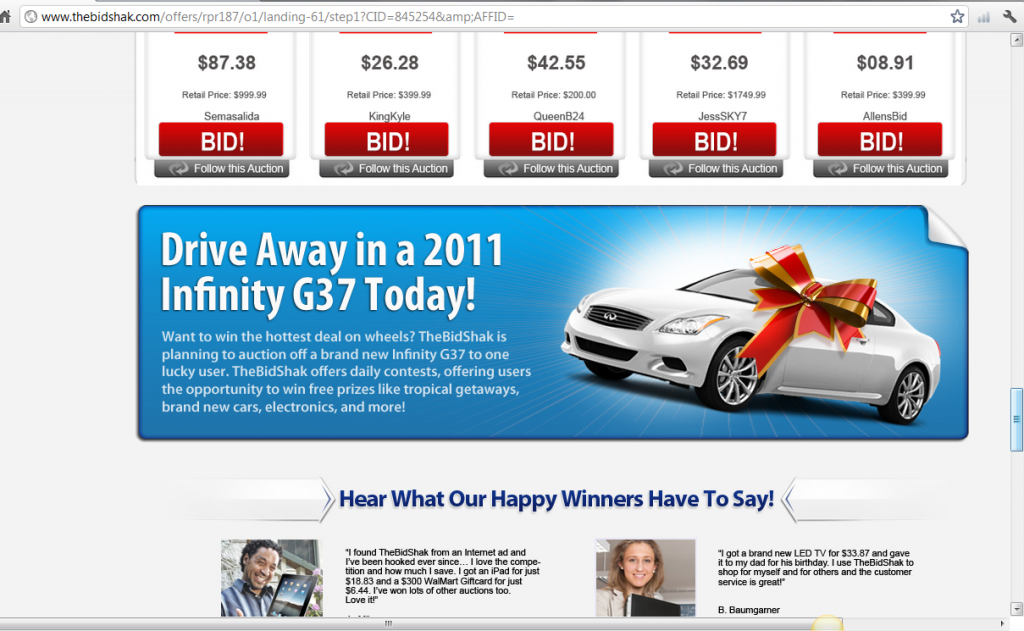 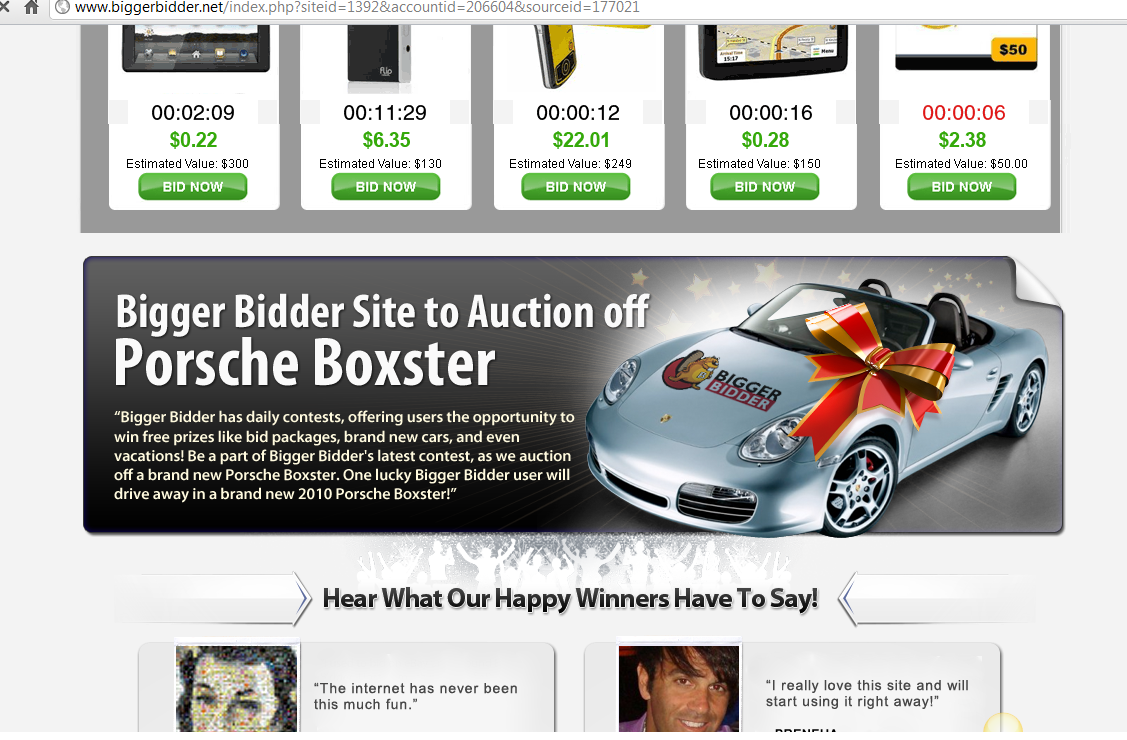 Not only do both BidMaxi and theBidShak have similar landing pages (who knows if these are both from the same affiliates or not), they have the very same – identical photos of people next to different names and different testimonials:

The first testimonial by “L. Milner: L Milner says ” I found TheBidShak from an Internet ad and I’ve been hooked ever since… I love the competition and how much I save. I got an iPad for just $18.83 and a $300 WalMart Giftcard for just $6.44. I’ve won lots of other auctions too. Love it”

The second, B. Baumgamer “I got a brand new LED TV for $33.87 and gave it to my dad for his birthday. I use TheBidShak to shop for myself and for others and the customer service is great!” 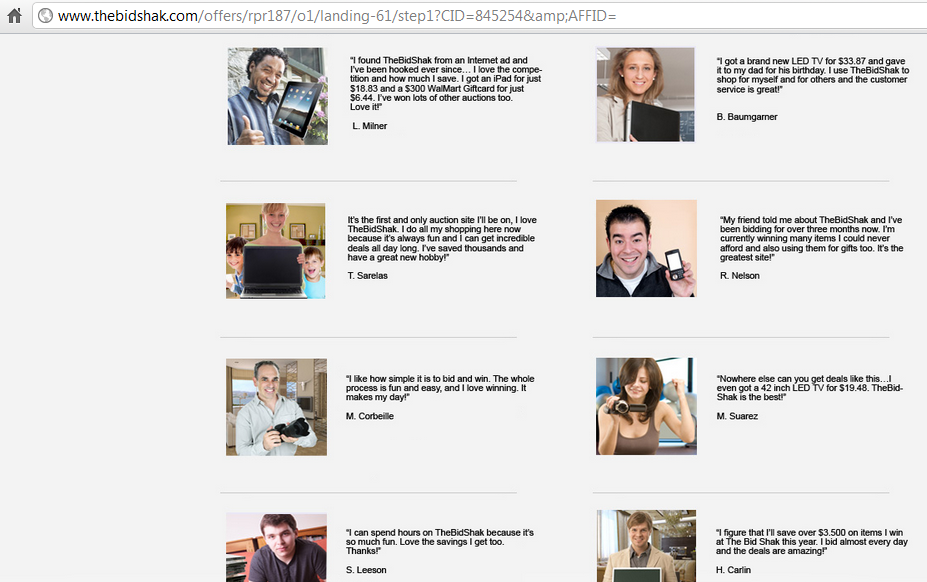 Notice both penny auction sites (affiliates more than likely) are using the exact people in their testimonial photos.

Who was “L. Milner” for BidShak is now nameless, but says “I used to bid on eBay until I found BidMaxi. I lost so much money of eBay! I wish I knew about BidMaxi long ago. Now I’ve been saving up to 90% on retail items and you know what? Got myself an iPad! Thank you BidMaxxi.:

Where Ms. Baumgamer is pictured in the testimonial for theBidShak her name is now Mary T to promote BidMaxi:

“I checked my mail 3 days after I won my new laptop on BidMaxi, and sure enough it was there! Brand new and working perfectly. Thank you BidMaxi” – Mary T 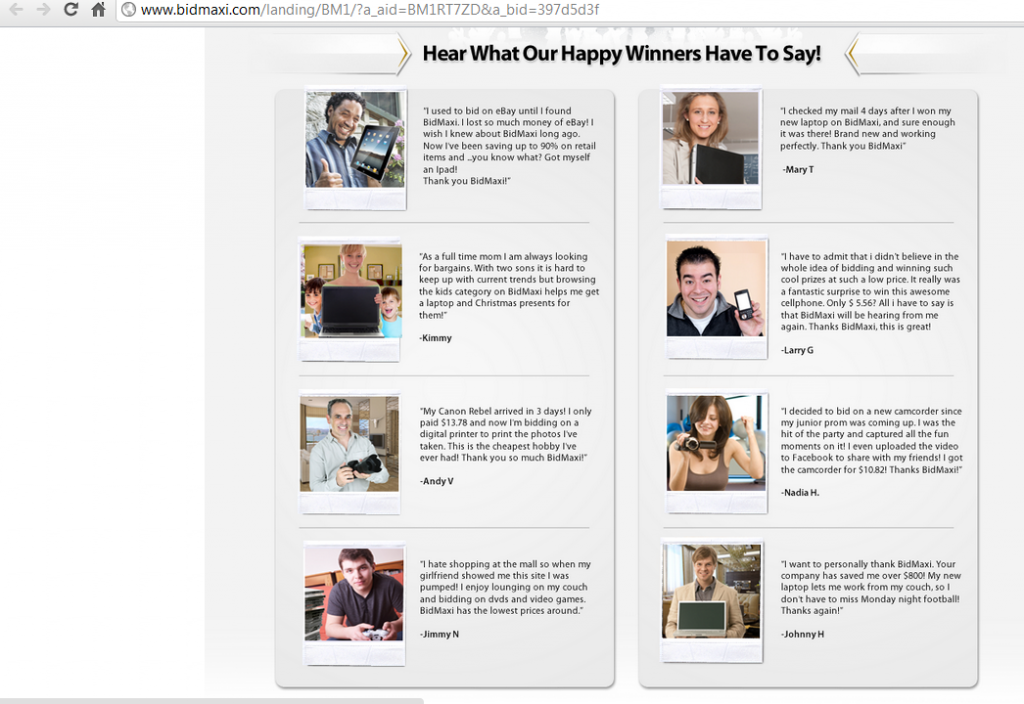 Again, notice that all of the testimonials on both landing pages are fake. Where are the items these “bidders” won?

In case you’re new to penny auctions and found out about one from one of these affiliate marketer’s landing pages, don’t be fooled by the phony testimonials.

These landing pages, however, should not be the determining factor for whether or not the penny auction site in question is a scam.

What do you think of these affiliate landing pages and the fake testimonials?

That’s why online pharmacies is becoming more pops over the last years. Well-known are remedies which are used to reduce inflammation caused by inflammation of the skeletal muscle etc. There were only few examples. Did somebody tell you about canadian generic Viagra? Maybe you yet know about the matter. Sexual malfunction can be a result of a physical condition. Even when it has a physical cause, psychological problems can make the disorder worse. Sex drive problems are so commonly a product of how you feel that there is something to that “headache” saying after all.

Next post: Penny Auction Bots Encouraged by Seller of GizmoBids.com