Could BidNuke’s Name Be Fitting? We Found What Appears to Be Phony Video Testimonials 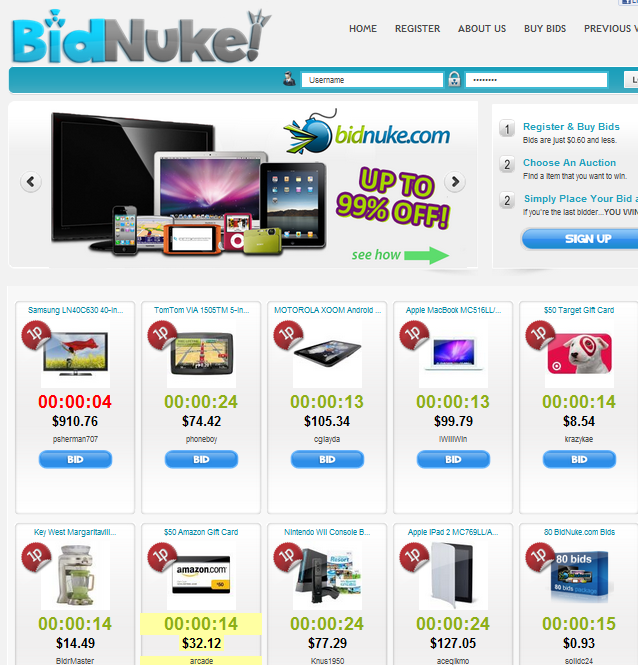 A few days ago we came across BidNuke.com, they appear to be a new penny auction site, the domain was purchased just on 4/22/11.

Welcome to BidNuke.com! Founded in 2011, we have quickly gained much attention for our quality service and low-prices. Not only are we America’s #1 Penny Auction Website, but we also have the best support in the game! Feel free to contact us with any questions and our dedicated support team will be happy to get back to you!”-Source: BidNuke.com About Page

However, it’s of our opinion that BidNuke is puffing, but that’s not all we believe they’re doing…

“puffing n. the exaggeration of the good points of a product, a business, real property, and the prospects for future rise in value, profits and growth.”

BidNuke.com is tastefully designed and has a nice user interface; however, do they really think we’d believe they’re “America’s #1 Penny Auction Website?”

BidNuke has an abnormally high number of users bidding up very high amounts, unusual for a new site, in our opinion.

Plus, for a brand new penny auction site, they sure have an abnormally high number of high-ticket, sought after items, many of which all happen to be ending at the very same time. 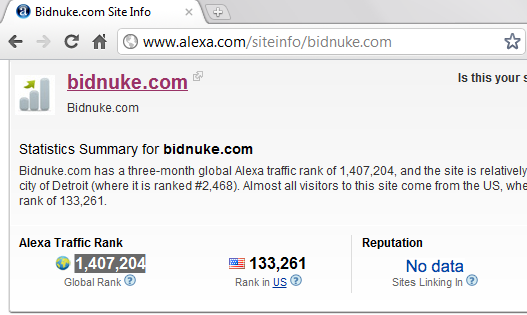 BidNuke holds a meager Alexa ranking of 1,407,204. Which means, according to Alexa they may not have very much traffic, at least in our opinion. At least not enough to be running as many auctions and maintaining as many bidders as there appear to be bidding on their site.

Here’s the line-up of items that were actively ending when watching their auctions on June 11th:

As is illustrated above, BidNuke states that they’ve “quickly gained much attention,” for their “quality service and low prices,” Low prices? They seem to be taking in tons of bids on these items, the current end prices are as follows:

All of these items appear to have had a beginning price of 0 and increase in price by $0.01 increments with each bid placed.

The PhpPennyAuction.com script has been known in the past to be sold with the bot functionality, click Penny Auction Scripts for Sale with Fake Shill Bidding Bots & Requesting an Explanation, for instance – Note the same icons used and the bidding area: 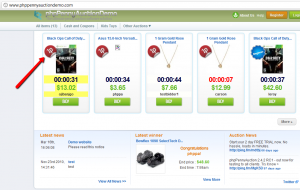 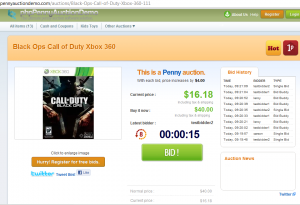 Notice the similarities in both interfaces? The top screenshot image is of the PhpPennyAuction.com script seller’s Demo Site, the below is of BidNuke.com: 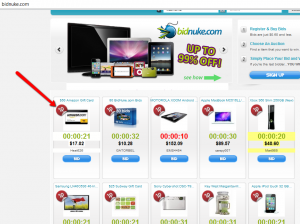 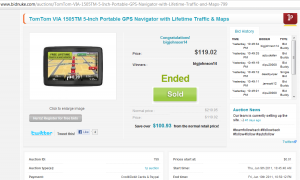 The bidding behaviors on BidNuke definitely, in our opinion, seem to be similar to those in bidding bot scripts (translation: fake, computerized bidders).

We tested the bot functionality of the phppennyauction script when we were running our test site Shillo.com on the phpPa script (We bought the phppennyauction script because we knew it had bots to show consumers what they were like. Shillo is now down at the moment thanks to the shady script reseller and an individual who didn’t like that we were exposing the shenanigans going on in penny auctions. click here to learn about Shillo and the PhpPennyAuction script, for a better understanding of bots.)

After a bit more searching – We’re even more leary…

Did you know that there are people online, who – for as little as $5, will

make video “testimonials” for businesses looking to promote their products or services?

Take a look, for instance, at the following individuals who do just that and advertise this service on a site called Fiverr.com:

“sanpan: I will create a 30 second or less product testimonial, review or mini commercial for your business, company or website for $5: 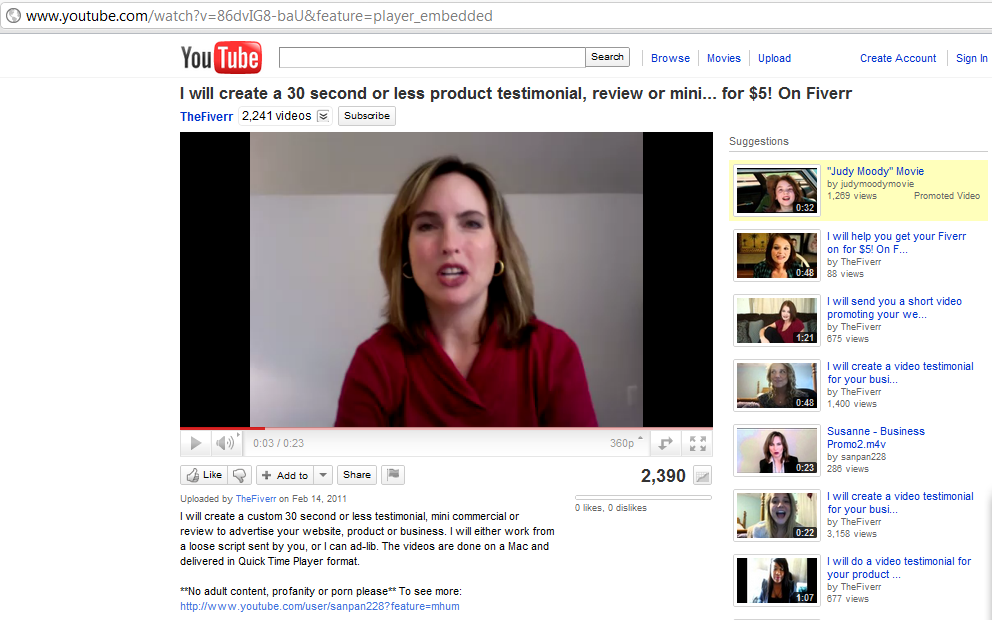 e_m_a: “I will record a video testimonial or review for your product for $5. I will record a video giving a testimonial about how great your product, service, website, etc. is. I have modeling and acting experience so it will be realistic and my eyes will be looking directly at the camera, NOT a script! Please keep it under 1 minute (approximately 180 words), appropriate, and profanity-free. The video file will be sent in .wmv format unless requested otherwise. Thanks!”

weirton: “I will deliver to you the BEST Video testimonial you have ever received for your business, website, company, blog, product, brand, service, invention, idea or anything with a Money Back Guarantee for $5”

So perhaps you’re asking, “Does it matter, aren’t these testimonials just like hiring a commercial actor, for say, a TV commercial?”

The key word here is ‘testimonial.’

“A formal statement of truth or fact”

Definition of testimonial advertising: “Promotional method in which one or more testimonials from satisfied customers are used.”

Well, this is exactly what we allegedly think the operators of BidNuke.com did. They’re passing off what we believe to be fake testimonials as real bidder testimonials both on YouTube and their homepage.

Not only do the bidders, in our opinion, seem very bot-like, the video testimonials shown on BidNuke.com don’t seem real.

On the very bottom of BidNuke.com’s Terms & Conditions page the following name and address is displayed:

“Any notice to us will be effective when delivered to us at bidnuke@gmail.com with a copy to our outside counsel: Nate Brown, PO Box 2954 Blue Jay, CA. or such replacement addresses as we may later provide on the Website.” 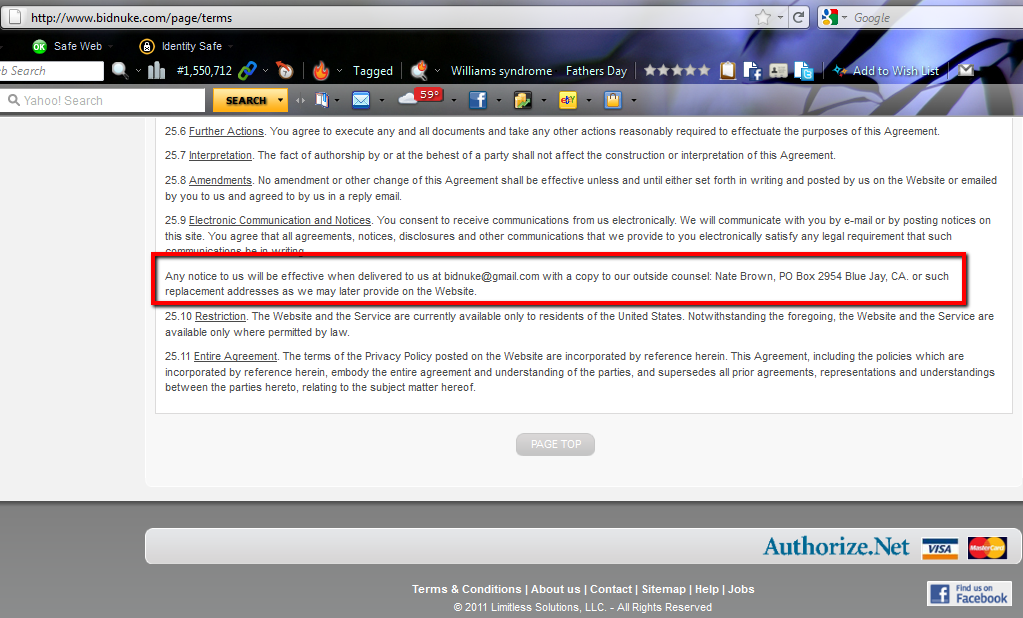 A Google search for Nate Brown, PO Box 2954 Blue Jay, CA brings up a whois record for the domain BidDuty.info – BidDuty.info is a redirect to an affiliate link that brings us to BidCactus.com. What’s important to note, in our opinion, is the jknate at gmail.com e-mail address.

Even more interesting to note is what we find on Google when we search “jknate.” In particular, the Google entry for

BidNuke BidNuke.com Just got a huge order of various awesome items to put up for bidding!! 28 Apr

We went back to Google and found another very interesting gig that jknate purchased and commented on, by julia666: “I will get over 400 followers to your Twitter account for $5”

It appears that since most of this info was found prior to this article being finalized, we see that jknate is an active member of Fiverr now- see non-cached comment: http://fiverr.com/users/julia666/gigs/get-over-400-followers-to-your-twitter-account?ref=glst-g-thmb .

Back to the discussion on penny auction bidding bots…

If a site appears to be using bidding bots, wouldn’t a consumer notice this and not waste any money there?”

Perhaps you want to ask us why we care so much about informing you about a site that may be using fake bidder bots. Maybe you’re wondering who would actually buy bids and try bidding on a site that would, to you, appear to be obviously using these computerized bidders.

I’ll tell you why, unsuspecting bidders who have never seen a penny auction site – most may not even know it’s called a penny auction – once they come across one are totally in awe. 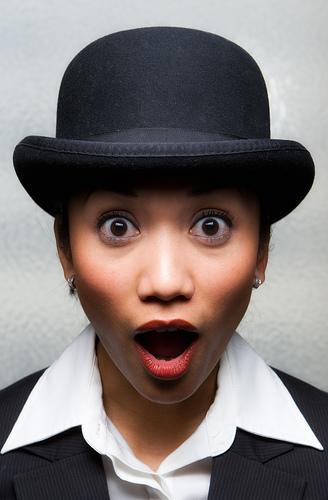 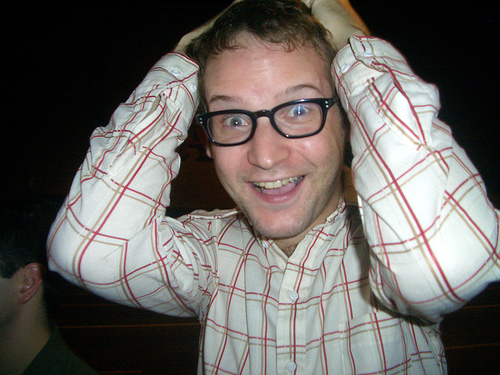 They’re amazed and want to hurry and get in on the auction action before the hot items such as iPads, TVs, gift cards have ended. After all, with mere seconds left on the clock, the bidder has the impression that they’ll miss out on great deals if they don’t act fast.

This bidder quickly joins the site and maybe purchases a bid pack, $200, $35, $17, try it and find that they don’t win, they may just move on and chalk it up to inexperience or not really understanding what it was they just spent their time doing.

Now imagine there is not just one bidder who is falling for it, but dozens, maybe even hundreds! All together that simple $17 can amass to become thousands of dollars to the shady penny auction site operator, who guess what, maybe never even shipped one item. Don’t believe me? Take a look at how we allegedly found a penny auction site owner admit to doing just that, ok, he said he shipped 1 iPod, but come on!

By the way, that unsuspecting user was once me.

Enough is Enough and before we know it, Enough will be TOO much. 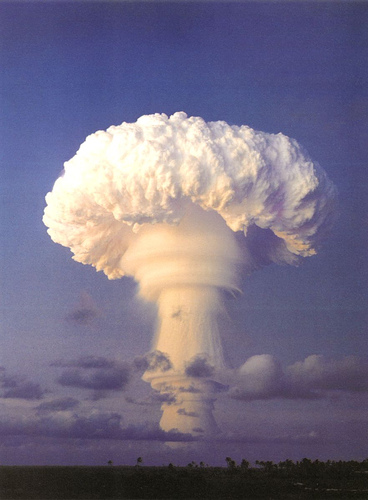 Discuss this and more! Click to join our free penny auction forum now.

Shock & Awe, male: Some rights reserved by The Opus