UPDATE 12/18/10: JONATHAN SMITH OF PENNYAUCTIONCOMMUNITY.com FORMERLY MIDPENNY.COM sold the Shillo.com script to me illegally when I asked him if he had resale rights. He sold it to me anyway and he was not entitled to do so. I did not have the right to purchase the software according to Scriptmatix, and apologize to Scriptmatix for buying it but Jonathan told me he could re-sell it. I did not know, he lied to me and he was in breach of the terms (if he really even owned the license). 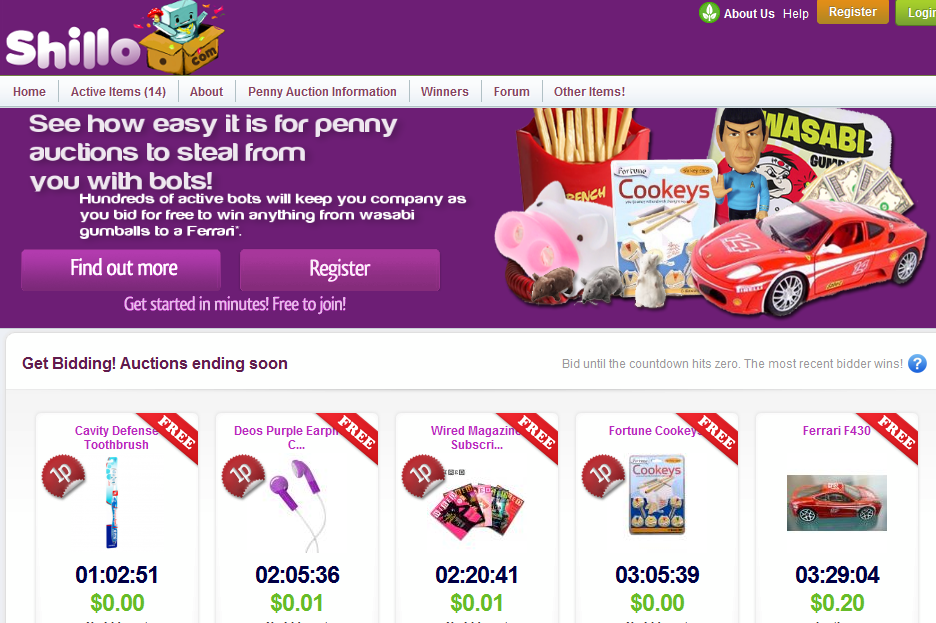 Earlier this month we announced that we’d soon be launching a free site to demonstrate and provide bidders with a free place to practice bidding on penny auctions, today, after a year in the making, it’s ready!

Penny Auction Sites are Stealing From Bidders with BOTS

I’m really frustrated now, more than ever, to really see just how easy it is for penny auction site operators to set up bots to shill bid and steal from paying bidders.

It has to stop! Yesterday, when it was posted here that investigation is imperative, because “it’s easy for penny auction sites to siphon money from hundreds if not thousands of customers, who’s to say that they even have to ship ANY items?”

Well, that was after we saw the “Hidden Reserve” function, “so products don’t undersell,” and just how easy it is to add autobidders (fake bidders) to auctions to bid until an X amount of bids (specified by the site operator) has bid.

For example, let’s say I’m an unethical penny auction site owner and I want to sell a brand new MacBook. I get the site all ready, advertise that users are winning hot items such as MacBooks for a huge % off retail. I then list the MacBook starting at $0 (you know, that attracts buyers), I also set up a hidden reserve at let’s say 30% markup (there’s a “markup feature” in Shillo too), so let’s say the MacBook is worth $1000, I won’t let that MacBook be won by a real bidder until I’ve received $1,300 worth of bids by paying customers. What if I don’t? That’s easy, let a bot win for less, it will look great on the Winners Page.

That’s how it works, and that’s how the shady penny auction site operators do it.

If you’ve been a long-time reader perhaps you saw the post where we presented the information which alleged that there were no usernames found bidding on many penny auction sites that used the same script as Shillo, well, some of those sites are still open and when I added the usernames for the bots (indicated with the word *BOT*) no e-mail addresses were needed.

This script isn’t the only one that comes with bots, btw: it does say it’s for testing purposes, but I’d like to know why it’s not being used for just test purposes and why there are “hidden reserve.” Other developers have equated their penny auction site script bots to being “autobots = your angels = protectors = body and business guards!” Another calls their bots “Intelligent Investment Protection.”
That’s why this post says investigation is needed, it’s wrong what shady penny auction owners are doing. They’re stealing from us and it needs to stop.

Hopefully Shillo.com helps users realize just how easy it is for a penny auction site to set up bots to bid against them, it sure helped us see that.

That’s why online pharmacies is becoming more popular over the last years. Well-known are remedies which are used to reduce inflammation caused by inflammation of the skeletal muscle etc. There were only few examples. Did somebody tell you about canadian generic Viagra? Maybe you along know about the question. Sexual dysfunction can be a result of a physical condition. Even when it has a physical why, psychological problems can make the disorder worse. Sex drive problems are so commonly a product of how you feel that there is something to that “headache” saying after all.

Previous post: Investigation Into All Penny Auction Sites is Imperative