There are currently two penny auction sites for sale on the website marketplace Flippa.com that have autobidding shill bidders, the first is blatantly promoting the use of autobidding bots as a surefire way to make an easy profit. 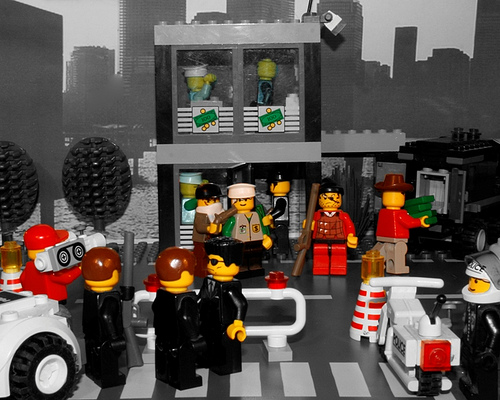 The seller of BidStation.net seems to be quite proud of the fact that the site he is selling comes with shill autobidders, he is telling potential buyers that a penny auction site with bots is a win-win situation, this is deplorable! This seller has recently sold the site easybids.net which has the same description.

According to the screenshots it looks like this is the net4bids/Feisty Script (note the brown backend). 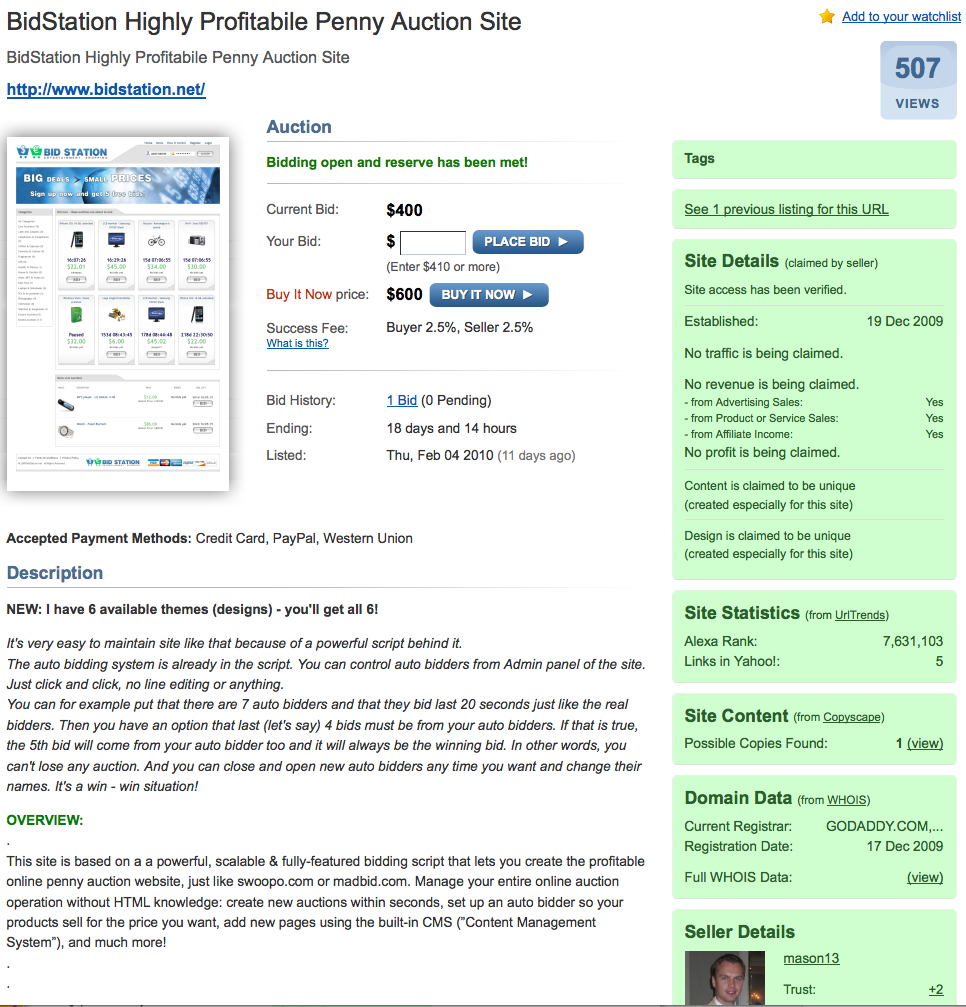 It’s very easy to maintain site like that because of a powerful script behind it.
The auto bidding system is already in the script. You can control auto bidders from Admin panel of the site. Just click and click, no line editing or anything.

You can for example put that there are 7 auto bidders and that they bid last 20 seconds just like the real bidders. Then you have an option that last (let’s say) 4 bids must be from your auto bidders. If that is true, the 5th bid will come from your auto bidder too and it will always be the winning bid. In other words, you can’t lose any auction. And you can close and open new auto bidders any time you want and change their names. It’s a win – win situation!

This site is based on a a powerful, scalable & fully-featured bidding script that lets you create the profitable online penny auction website, just like swoopo.com or madbid.com. Manage your entire online auction operation without HTML knowledge: create new auctions within seconds, set up an auto bidder so your products sell for the price you want, add new pages using the built-in CMS (”Content Management System”), and much more!

1. A completely automated system that was built with usability in mind. Features include the ability to duplicate multiple auctions, block bidders, peak-only bidding, engine to award free bids, and much more.
2. You decide when your auctions finish. Price too low? Use the auto-extend feature. Not enough bidders? Use the auto-bidding feature. Making a profit has never been so easy.

And then there’s Bids4Penny.com, the active penny auction site that has generated an income of $1,556 in one month:

Surely they lost money on the Ford KA…? That is if it really existed, we don’t believe that Bids4Penny.com really sold a brand new car to anyone: 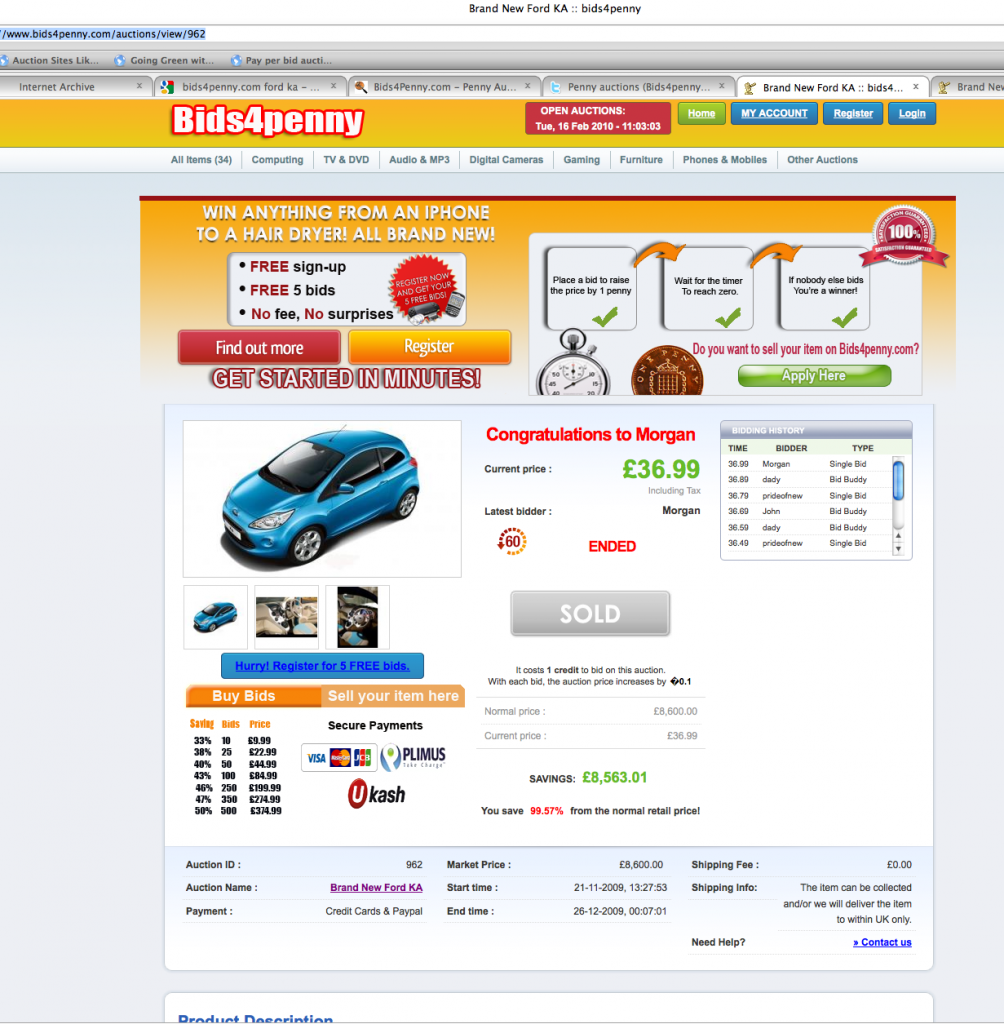 Wait -Bids4Penny sold not one, but two Ford KA’s? Plus if you take a look at bids4penny.co.uk it looks like they’ve copied eBay’s trade dress :-|. 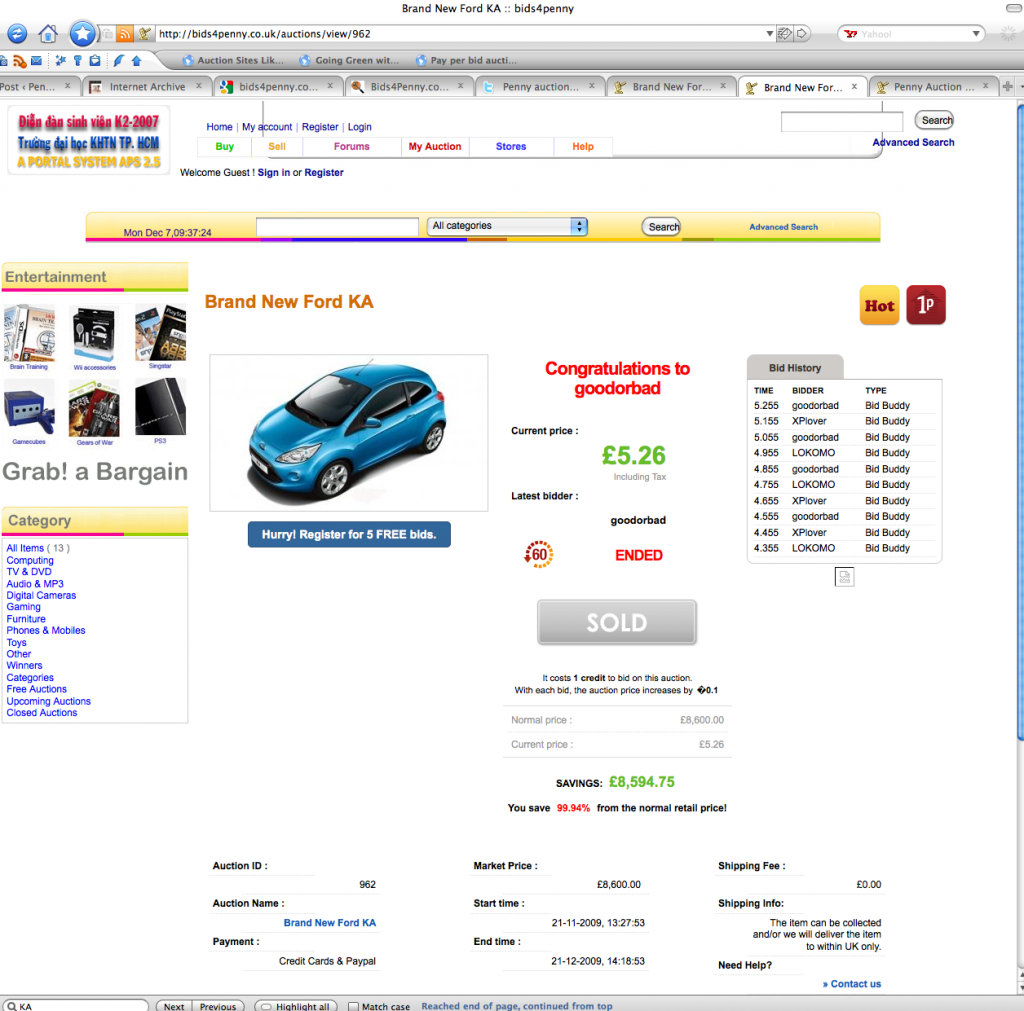 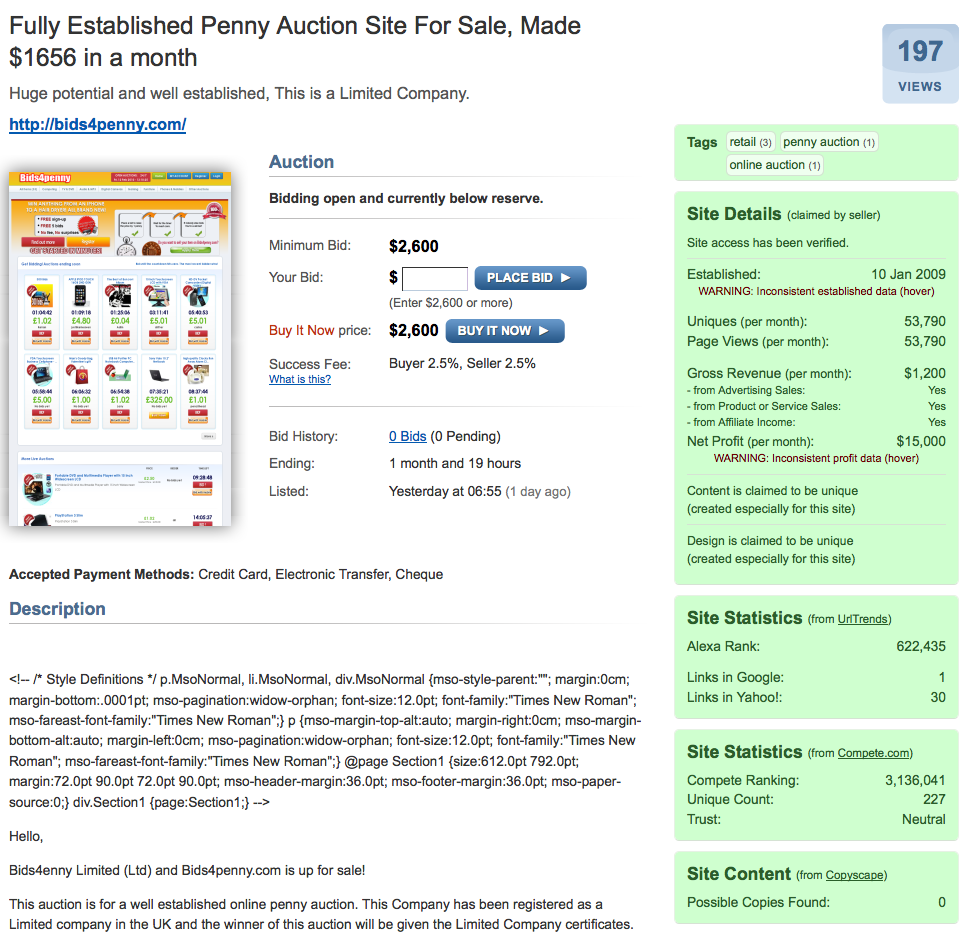 It is in our opinion,  that Bids4Penny.com has gained their revenue thus far by use of hidden reserve bots that bid against real individuals who purchased bid packs.

If they did we are asking that they refund all of the money that bidder’s gave them to bid against their shill bidders.

Bids4Penny.com is using the PhpPennyAuction.com script, which we already know has the bot capability in the backend: 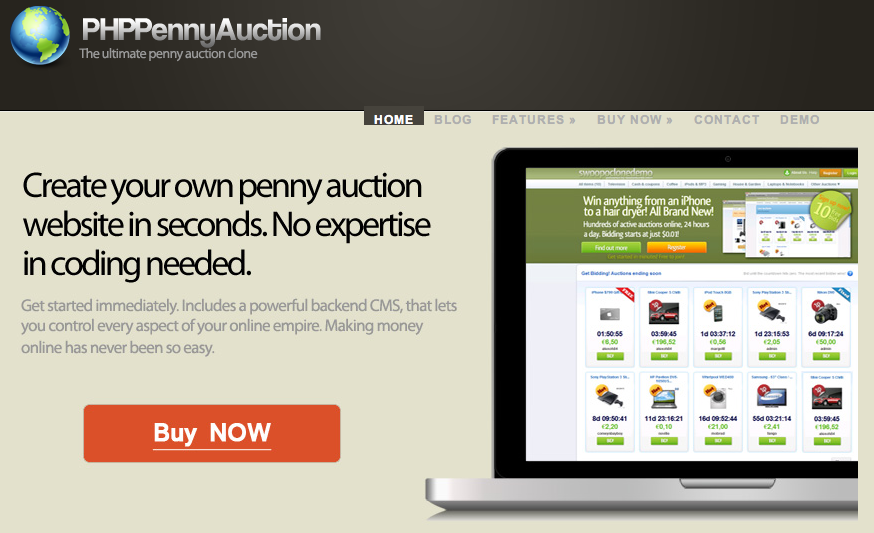 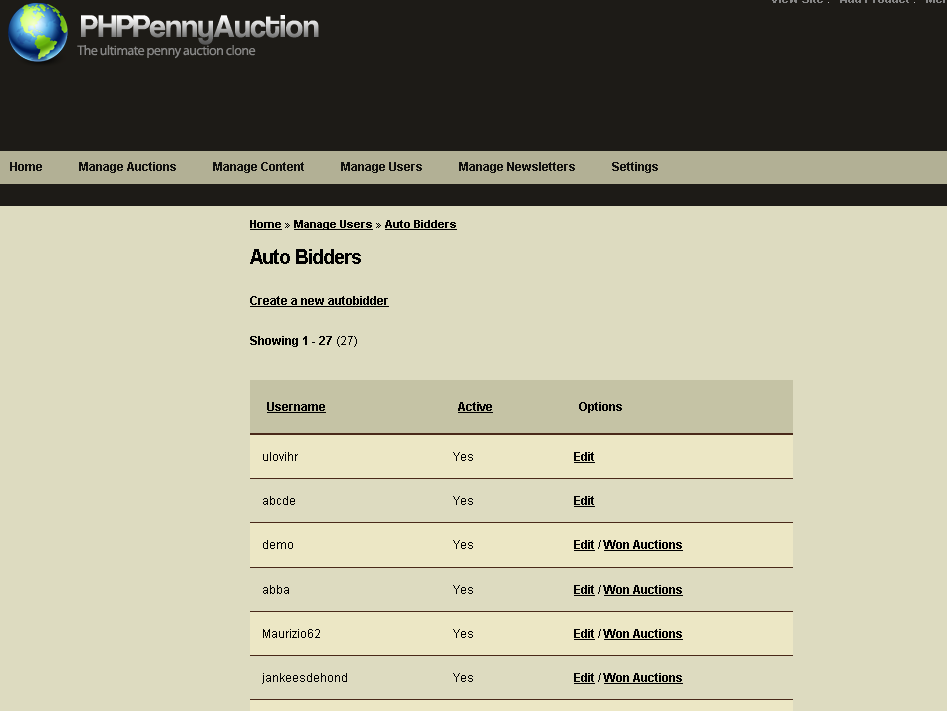 PHPPennyAuction.com promotes the use of bot bidders:

It’s also important to note that there have been 4,417 ended auctions, if Bids4Penny.com really sold this many auctions, or even 1/4th of this, with all real bidders bidding they would have made much more money than what they say they did.

The use of bot auto bidders to shill bid is wrong and script developers, as well as sites that are promoting this behavior should stop. We hope that the new site owners of both of these penny auction sites realize this.

Don’t forget to enter our We Love Our Members Giveaway!

That’s why online pharmacies is becoming more popular over the last years. Well-known are remedies which are used to reduce inflammation caused by inflammation of the skeletal muscle etc. There were only few examples. Did somebody tell you about canadian generic Viagra? Maybe you already know about the problem. Sexual malfunction can be a result of a physical condition. Even when it has a physical cause, psychological problems can make the disorder worse. Sex drive problems are so commonly a product of how you feel that there is something to that “headache” saying after all.