BidTavern.com For Sale After Just One Month 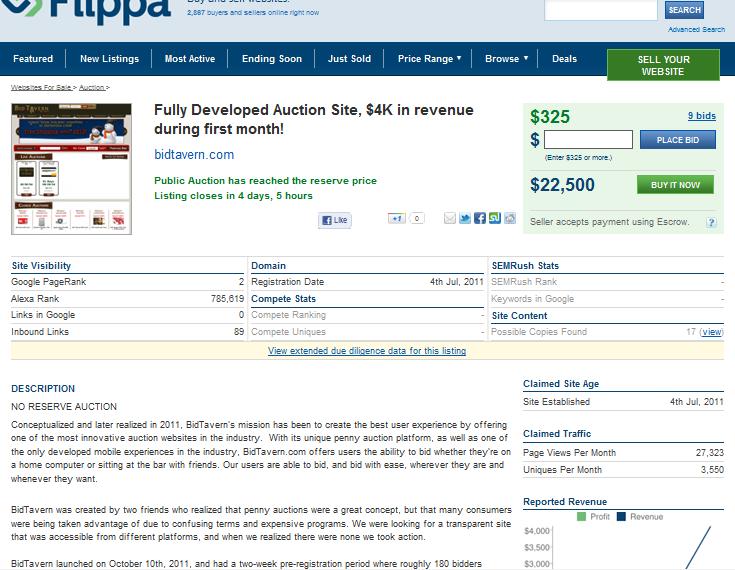 BidTaverns owners state that they planned to create the site to turn around and resell, but they also admit that running a penny auction site takes work.

From the Flippa listing:

Why are we selling?

We set out to build one of the most innovative penny auction websites in the industry.  Over the last several months of building and then launching the site, we’ve grown the site to something that we’re both extremely proud of.  With that said, maintaining a penny auction website takes work and dedication, and our goal was always to sell this site once it had grown to a position where somebody could take it over and run the site without a ton of marketing.

Our passion is in building sites, growing them, and then putting them into someone elses capable hands to continue growing the site and making money.  This benefits the winner of this auction, as they’ll be getting a completely turn-key penny auction site where they can hit the ground running.

BidTavern is still auctioning items, $10-15 gift cards and bid packs, not the same bar-party, grilling, game themed items they had planned to offer.

Caleb of BidTavern.com told us,

“We will be completing fulfillment on all auctions won this week before we turn the site over to the new owner. Anyone who won an auction, or took advantage of the BIN option, will have them items sent out. We will complete this before the transition. We understand a lot of the problems that come along with penny auction sites is the owners running away, I just wanted to assure everyone that we are not doing that.”

What do you think of BidTavern being up for sale? Do you bid there?

Next post: SharetheSpoils the Penny Auction That Gives Back Makes a Come Back