Have you bid on Bidders Paradise aka Bp8.hk? BiddersParadise – Would You Bid On a Hong Kong Owned Penny Auction? The Hong Kong based penny auction that raised red flags with us here at Penny Auction Watch since early last year when it came on the scene. Bid packs were being sold for $1175, handbags being sold with what looked to be over $36,000 in bids and operating under a very confusing, complex multi-level marketing scheme.

Bidders even alleged that they won items and walked away empty handed.

Back in 2014 the BiddersParadise site showed pictures of “winners” posing with items in what looks to be their offices. 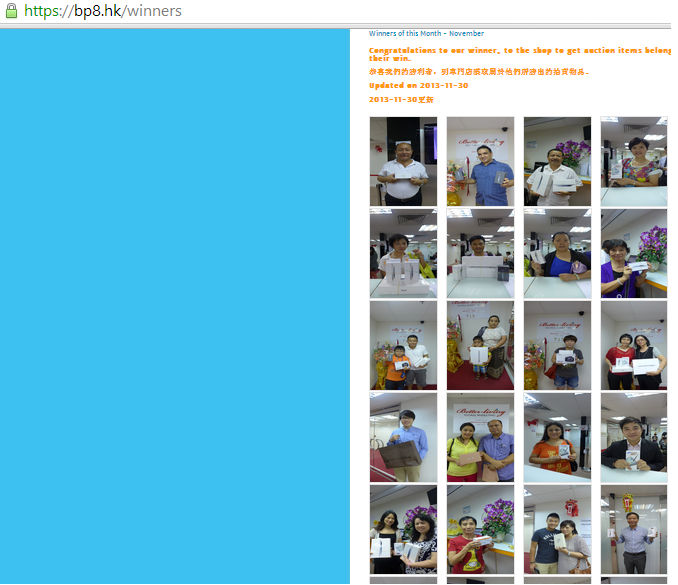 Here’s a screenshot of their winner’s page from today, April 26, 2015. Notice how the “winners” are now pictured in a home setting:

Well, turns out now, after one year, Bidders Paradise and its founder are now under investigation in China.

A recent report in the South China Morning Post shares that the Tsim Sha Tsui-based penny auction company founded by Luke Teng,  son of the late Reverend Philip Teng Jinhui, who led the North Point Alliance Church, is now under investigation and officers from the commercial crime bureau raided its offices in New Mandarin Plaza and homes across the city in February. The number of complaints have increased and officers claim that the scheme involved HK$50 million, $6,451,613 USD.

According to another article, translated from Chinese, here’s part of it here, 5 people from the site are alleged to have been arrested.

“WASHINGTON – Police Commercial Crime Bureau yesterday arrested five people in charge of an auction site, and search auction company in Tsim Sha Tsui’s office, seized computers and documents back to the Department of Investigation. Police sources involved in the auction site refers to二○一三年established that members purchase points can bid different goods, and introduce new people to join a cash prize. But auction site last year can not provide bonuses, there are members of the police for help, the police investigation believe that the site covers a pyramid selling techniques, nearly 50 thousand people “caught”, involving funds of 52.1 million yuan.
Reporter: Jiang Weikang CCB yesterday arrested suspects Auctions “Bid rainbow” in charge of one man and four women (age Between 51 to 59), and several officers went to the site in the afternoon New Mandarin Plaza, Tsim Sha Tsui service Department searched and seized several computer books and other documents. Detective Chief Inspector Huang Min said in April last year have received seventeen people (thirty to sixty-year-old) report that the suspect is an auction site defrauded of money, the amount of the informant involved in about $ 4 million.” – Source http://hk.apple.nextmedia.com/news/art/20150212/19038914

What gets really interesting is a few people I’ve come in contact with in my day-to-day life, offline, have told me that they have heard of BiddersParadise and know of friends or family who have been invited to hotel conference rooms to learn about this Chinese-MLM-penny auction scheme, from California to Las Vegas and here in Minnesota.

According to the news report over 50k bidders from Hong Kong are believed to have joined the site.

We will be following the development of BiddersParadise and update you here.

Have you bid on BiddersParadise – bp8.hk or heard of this site? Did you lose money or fail to receive won items? Let us know!

That’s why online pharmacies is becoming more pop over the last years. Well-known are remedies which are used to reduce inflammation caused by inflammation of the skeletal muscle etc. There were only few examples. Did somebody tell you about canadian generic Viagra? Maybe you yet know about the matter. Sexual malfunction can be a result of a physical condition. Even when it has a physical cause, psychological problems can make the disorder worse. Sex drive problems are so commonly a product of how you feel that there is some to that “headache” saying after all.

Filed Under Hall of Shame
About the author: Connect with me on Google+
1 comment… add one