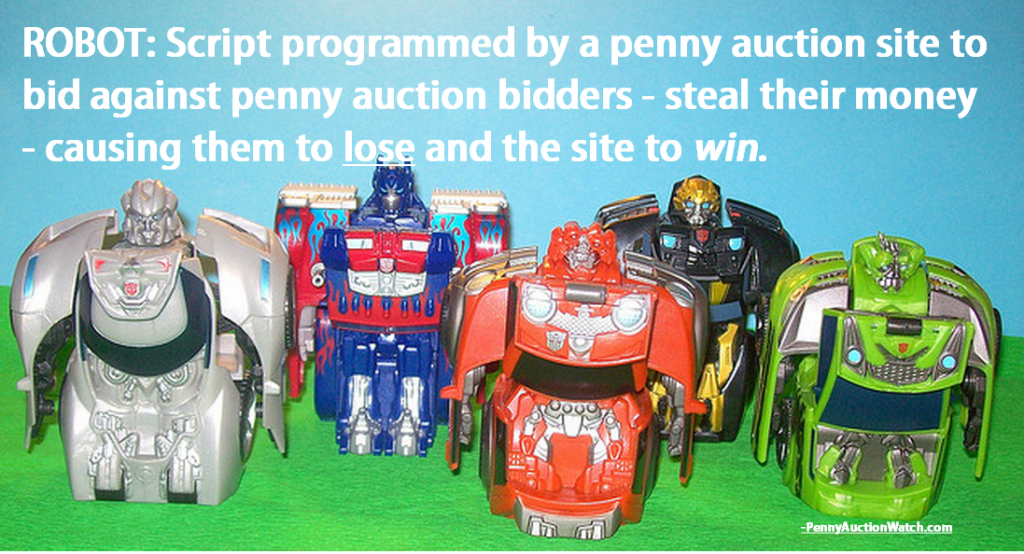 Whether you are a consumer who is searching to obtain electronics, gift cards and others items online at a discount, or someone of influence who is interested in protecting consumers please really read over what I’m about to share with you.

For nearly 3 years now Penny Auction Watch has been reporting on scam penny auction sites and their use of illegal bot bidding scripts, false advertising, manual shill bidding a number of other shady operations that are being undertaken by “penny auction entrepreneurs,” and provided a platform for consumers who are not receiving purchased goods to have a voice.

When it comes to consumers being blatantly ripped off by scam artists it cannot be stressed enough that enough is enough, and it’s time that more is done to bring awareness and stop Internet fraud.

I started this site in 2009 because, I, as an unsuspecting consumer, new to penny auctions thought I could actually have a chance of obtaining a deal on a penny auction site only to become scammed by a shady business and their automated bot bidding scripted bidders that bid against me. At the time I did not see the government or any regulatory agencies doing anything or even looking into penny auctions even after I had proof of many sites blatantly stealing.  In fact, the media was barely paying attention, those were the early days of penny auctions.

Things have started to change for the better,  and now the FTC just a few months ago issued a consumer advisory. Both Washington State and Georgia took action against penny auctions: PennyBiddr & Wavee. The BBB has blogged about and issued warnings, and many reporters have talked about and are telling consumers to err on the side of caution when it comes to online penny auctions.

Over the years there have been even more penny auctions that came online, many of which were (some of which still are) outright, shamelessly scamming consumers not only in the US, the UK and a number of other countries including Ireland, Australia and New Zealand.

Now let’s take a look at the penny auction business located at ArrowOutlet.com

“It does seem as if they have more bidders than they have traffic:

There are 1,623,263 sites with a better three-month global Alexa traffic rank than Arrowoutlet.com, and almost all visitors to the site come from the United States, where it has attained a traffic rank of 170,771. The site’s visitors view an average of 2.1 unique pages per day.

The bidder’s on ArrowOutlet.com really seem, in our opinion to be alleged bots (shill bidders/programmed), with names like:

I was just posting my opinion based on my experience bidding and observing penny auctions. There were other things that were not without scruple surrounding this site including, but not limited to, an alleged fake review blog back then as well.

We were just informed that a group of 5th year Mathematics PhD students at University of California, San Diego, as a part of a project in statistically modeling human decisions, they studied the penny auctions at the penny auction site ArrowOutlet.com. Over the course of two months, November and December of 2011, the students monitored the behavior of every user and they also recorded the bidding history of every auction. They tell us that their computers worked over 2,000  hours and analyzed over 500 megabytes of data.

After two months of analyzing the penny auctions on ArrowOutlet, what did they find?

“Sadly, this work can not be used to model human game theory because the majority of users at ArrowOutlet.com are in fact robots.”

“We have decided to make this data public and anyone who would like to use this information can. In November and December 2011, the majority of bids at ArrowOutlet.com were placed by robots and the majority of auctions were won by robots. As a result, 95% of all humans who participated at ArrowOutlet.com in November or December 2011 lost money overall. In these 2 months, human net loss totaled over $260,000.00.”

Did you see that? These students allege that human net loss to the penny auction site has totaled over two hundred sixty thousand dollars! 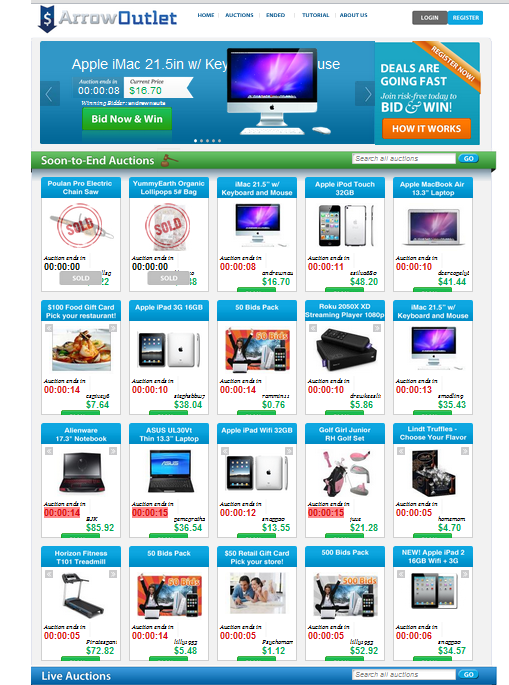 I just checked out ArrowOutlet.com and just right now (it’s nearly 1 AM EST) there are 18 items all ending, and being bid on simultaneously, with less than 40 seconds left on the clock. Out of these 18 items there are 2 Apple iMacs, 1 MacBook, 2 laptops (1 Asus, 1 Alienware) 2 iPads, a treadmill valued at $600, and an iPod Touch. All of these items would be considered high-ticket items. Many penny auction sites have not been able to offer so many high ticket items and still sustain themselves. So many penny auctions have shut down, just yesterday a site told us that they were shutting down because they didn’t have enough money to continue operating.

The UCSD PhD students have presented their ArrowOutlet.com findings in depth, complete with a history of all completed auctions, all bid histograms, how they detected robots, and what they claim is the site’s net earning.

In the process of their research, to ensure timing accuracy (server lag, and what the clock shows isn’t 100% what the server is recording) the PhD students did even rented a server in the same location as ArrowOutlet.com and they sent the site requests to be able to sync their time with that of ArrowOutlet‘s.

Read the page on how robot bidding was detected on ArrowOutlet.com – In short, but really take a look at the page and histogram: 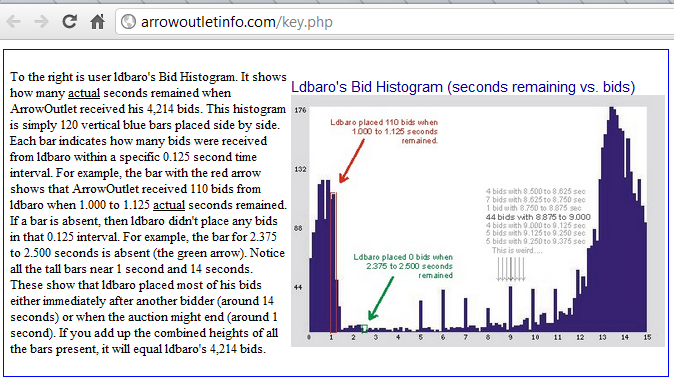 Now take a look at these histograms: 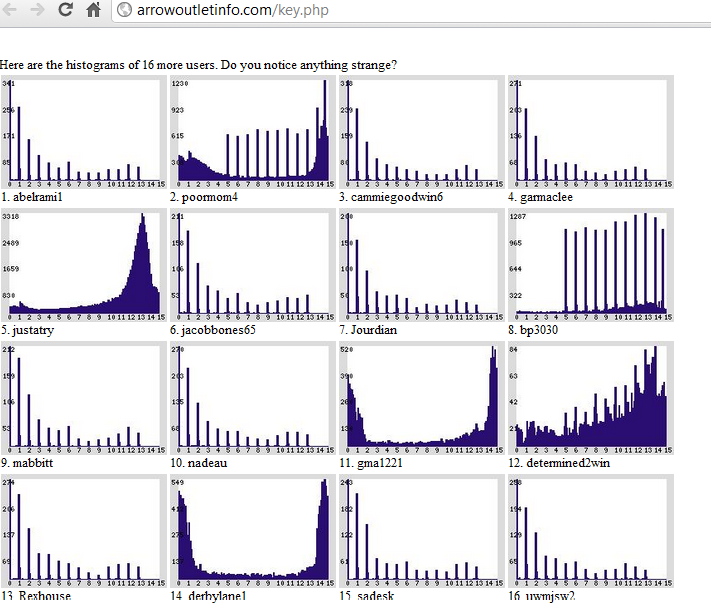 “Since 100% of the bids from Bidders 1, 3, 4, 6, 7, 9, 10, 13, 15, and 16 are placed with exactly integer actual seconds remaining and 75% of their bids are placed with less than 5 seconds remaining (at integers 0, 1, 2, 3 and 4), this implies they are not using ArrowOutlet’s only 2 methods to bid, the Bid-O-Matic or the Bid Now button. Also, amazingly, 25% of their bids reach ArrowOutlet’s server when precisely 0.00 actual seconds remain. There are 3,000 bidders exhibiting this same strange and amazing behavior. These bidders are robots and not humans.”

See a pattern yet? 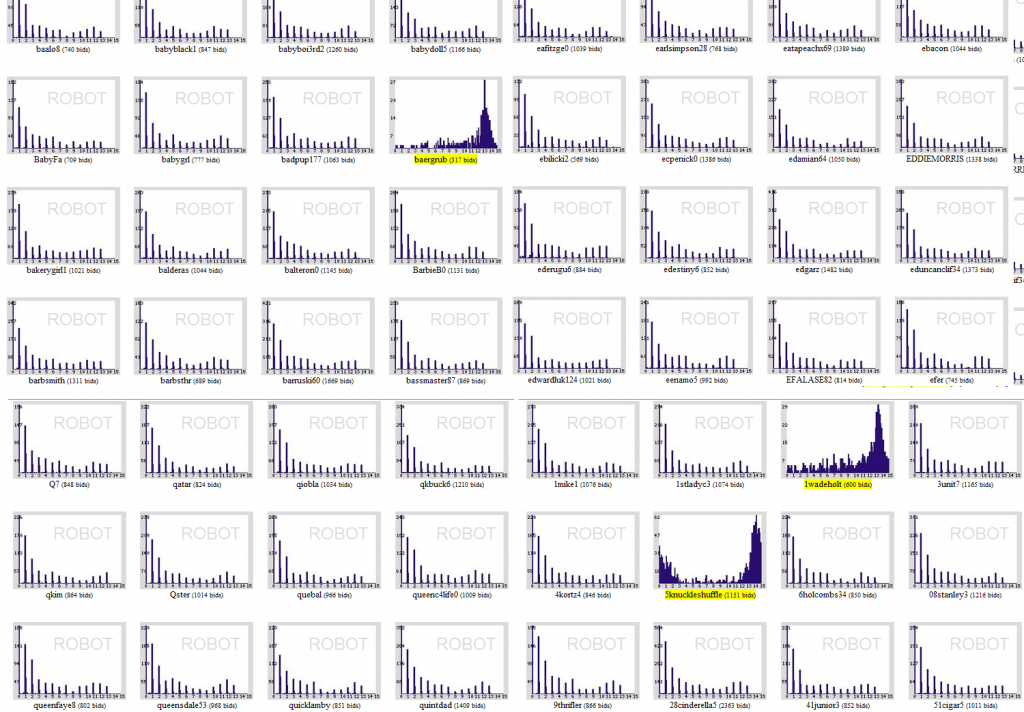 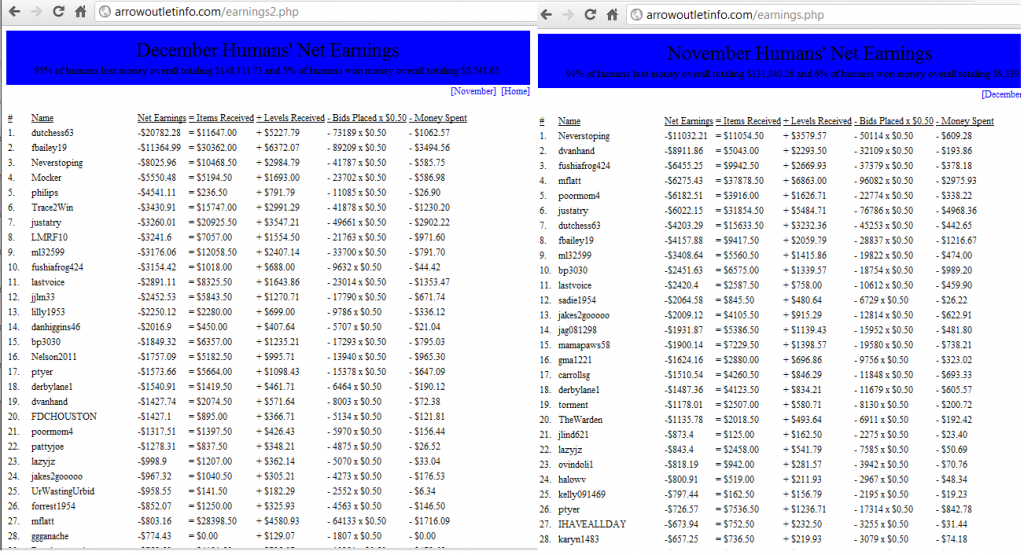 In my opinion, what has been gone to great lengths to obtain and document, is an excellent example yet again confirming what many of us who have participated in and have followed the penny auction industry have found by other means on other penny auction sites, via talking to defunct site owners, observing and communicating with script developers, finding many false testimonials, and by becoming victims by firsthand experience –  we know that there are some penny auctions that are scamming consumers.

Again, be sure to check out ArrowOutletInfo.com for more on these findings and documentation. They are inviting anyone with questions to e-mail them [arrowoutletinfo at gmail.com]. Also feel free to double check their work.

So tell me, will anyone take notice now?

Join our forum and discuss this with us.

That’s why online pharmacies is becoming more popular over the last years. Well-known are remedies which are used to reduce inflammation caused by inflammation of the skeletal muscle etc. There were only few examples. Did somebody tell you about canadian generic Viagra? Maybe you yet know about the question. Sexual dysfunction can be a result of a physical condition. Even when it has a physical why, psychological problems can make the disorder worse. Sex drive problems are so commonly a product of how you feel that there is something to that “headache” saying after all.

Filed Under Hall of Shame Tagged With arrowoutlet.com, penny auction robots, penny auction scams
About the author: Connect with me on Google+
10 comments… add one