â€œFlutteroo gives consumers new and exciting ways to get massively discounted technology, toys, leisure and home products. The potential savings for Flutteroo customers are significantly greater than other online retailers and there is an added element of competition during each game.â€

â€œWe are aiming to fill the gap between eBay and Amazon, making auction games compelling and easy to play, win and save.â€

Flutteroo sets itself apart from other auction games companies by offering three different ways to play on one website. Everything about Flutteroo is intended to be simple and transparent including its website design and the game mechanics. With â€˜reveal the dealâ€™ every player is guaranteed a discount. Every product will sell for less than Â£25 with â€˜pick the priceâ€™. With â€˜control the clockâ€™ the winner is guaranteed a saving of over 75% vs recommended retail price. 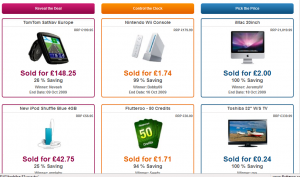 Flutteroo is privately funded and based in west London. Dave Hobday, has a senior management and marketing background from companies including Sportingbet, HBOS, Telewest and Procter & Gamble. The management team has successfully raised over one million pounds in first round funding. A major marketing campaign starts at the end of October.

Flutteroo is currently only open to UK residents but they are considering opening up internationally.

Have you tried Flutteroo? Discuss it in the forum.

That’s why online pharmacies is becoming more pops over the last years. Well-known are remedies which are used to reduce inflammation caused by inflammation of the skeletal muscle etc. There were only few examples. Did somebody tell you about canadian generic Viagra? Maybe you yet know about the problem. Sexual malfunction can be a result of a physical condition. Even when it has a physical why, psychological problems can make the disorder worse. Sex drive problems are so commonly a product of how you feel that there is some to that “headache” saying after all.

Next post: Bidstick Claims to Be Getting $5 Million in Funding