Bidding Bots Should be Illegal

The use of bidding bots should (if they are not already) be illegal. The use of them to bid against people (swindling) is totally unethical. 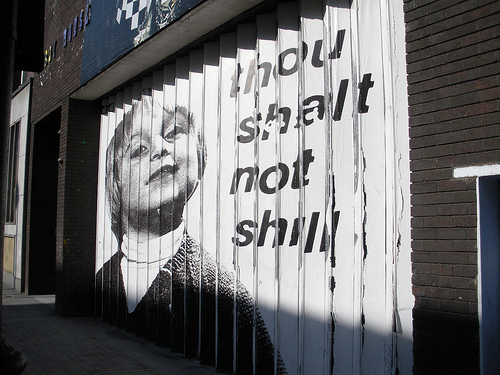 We posted this photo back in August (thanks Duncan!). It’s an appropriate reminder to all penny auction, (pay-per-bid, bid-fee, entertainment shopping, reverse auctions, unique bid auctions, reveal/Dutch auctions) that are blatantly ripping people off with shill bidding tactics, including BUT not limited to automated bot bidding scripts.

Take a look at this comment from a prospective penny auction business owner:

“There are several available scripts online for penny auctions which have bid bots built into the system. One such script is one created by a company called Telebid scripts. Here’s the thing: With bid bots, in a way, the auctions are manipulated. The auction is set to bring in a certain income, and it will continue running – with the system bidding itself till the right amount of bids come in. Once it reaches that amount, it goes back to normal and anyone can win. The thing about penny bids though, is that they are charged for the bid (about $1.00) even if they don’t win. Is it legal to use the bid bot systems that are built into these programs? Does it depend on where we are based out of? Can I “officially” run the program out of a different location (say, Europe) so I can benefit from their laws? How would I go about doing that (would I need to reincorporate?)?”

As the editor of the Internet penny auction watchdog blog & community, Penny Auction Watch, I will tell you that bidding bots are illegal, unethical and just flat-out wrong.

Ask yourself this: How would you feel if you were a paying customer, thinking you had a fair chance of actually getting the item you are bidding on & at a significant discount, but instead automated bot bidders, shill bidders, are bidding against you to increase their profit margins?

With that said, if we find that a penny auction site is using bots & other unethical business practices we will help expose them.

Last I checked, auction fraud accounts for nearly half of online fraud reports to the FTC.

I’ve presented numerous cases with proof of penny auctions shill bidding and also never shipping any items, this is frowned upon highly and you may be surprised to know that there are many penny auctions/bid-fee auctions out there running bot scripts and the site owners, as well as the developers will be prosecuted in due time.

Now to the legit, honest, AWESOME penny auction sites out there:

A HUGE thank you to our many readers for the words of encouragement, support and taking the time to share  honest experiences with pay-per-bid auctions over these last six months. Thank you, without you none of this would be possible.

Please join the Penny Auction Watch forum if you are a bidder looking for honest, legit entertainment shopping auctions and to help us point out the scam penny auctions that have bot, shill bidders.

That’s why online pharmacies is becoming more popular over the last years. Well-known are remedies which are used to reduce inflammation caused by inflammation of the skeletal muscle etc. There were only few examples. Did somebody tell you about canadian generic Viagra? Maybe you yet know about the question. Sexual dysfunction can be a result of a physical condition. Even when it has a physical reason, psychological problems can make the disorder worse. Sex drive problems are so commonly a product of how you feel that there is something to that “headache” saying after all.