Interview with Bidzville Where Items Have Ended at $0.01, Really!

Have you bid on penny auction site Bidzville.com? Recently bidders have won items for as low as $0.01, 1 bid!

What one PAW member has to say about Bidzville:

Hi all,
I’d like to give my opinion on Bidzville.com. I’ve had nothing but positive experience with this site. I have won several $10 giftcards, and all have been promptly shipped. The owner is very polite and is quick to respond to emails.

I noticed quite a few comments about increasing the $ amount of the giftcards. I would imagine that will come with time, and with increased site traffic. But in the meantime, five $10 giftcards is the same as one $50 giftcard, right? Why not get in there and get them while they are still going for a few pennies?

Just wanted to give my support to an owner who seems to be running an honest site, and is actually nice to his customers. For what it’s worth…

Recently ended items on Bidzville, $0.01 for a Samsung laptop & $50 gift cards! Bidzville has recently moved over to just offering gift cards until they can build a larger userbase: 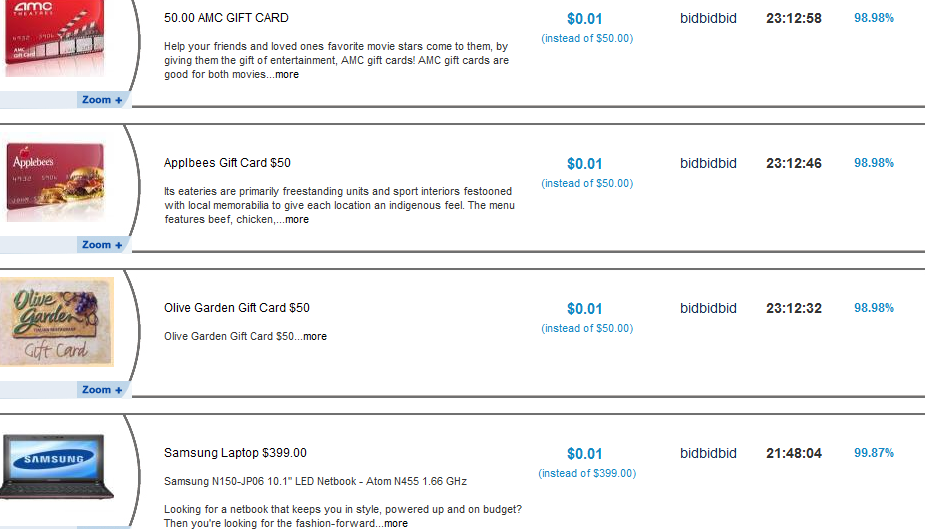 We recently interviewed Al, the founder of Bidzville to find out more about his penny auction site.

﻿Penny Auction Watch: What got you interested in the entertainment shopping  industry?

Al-Bidzville: I was a bidder for several months and won quite a lot of stuff  like cameras, an ipod, a surge protector and even though after counting my bids and realizing that I actually lost money, but I had fun. And that to me was more important than the money lost.

Penny Auction Watch: How long has Bidzville been open?

Al-Bidzville: I opened Oct 4. So that would make me about 2.5 months old (approx)

Penny Auction Watch: What kind of items do you offer/ have lined up?

Al-Bidzville: I started with gift cards because I felt that not only was it an inexpensive way to begin, but gift cards are like money. You can buy what you like with them at the corresponding store. I tried to add some pricier items and was butchered so I am back to gift cards only this time I will let my bidders tell me what to auction. If they go for my one gift card today for $25 then I will put up 2 gift cards for $25 and it will work itself up as fast as the bidders want it to go.

Penny Auction Watch: Do your auctions run on a schedule?

Al-Bidzville: Yes. I did not at first until one of my bidders who lives on the east coast told me that it is to late for him to bid on some of my auctions. So I now try to place my auctions between 5 and 9 PST

Penny Auction Watch: What do bids cost on Bidzville?

Penny Auction Watch: What are your shipping costs? How long does it usually take for users to receive their items?

Al-Bidzville: My shipping costs for Gift Cards are $2.95. For larger items, the shipping cost varies between $2.95 and $9.95. I ship out the next business day after the win. I would hope that items like the gift cards would get to the winner in 3-4 days. That depends on the mail service for any given day.

Al-Bidzville: I’m in the US but seriously thinking of opening to Canada.

Al-Bidzville: Refunds are given within 7 days if the merchandise looks like it has not been used.

Penny Auction Watch: Is there a story behind the Bidzville name/theme?

Al-Bidzville: Not any more than I was thinking of a name for my site. I thought of bidtown, bidusa, bidsville (which was taken) so I said what about bidzville.com. That name was owned but for sale and I liked it so
I spent the extra money to get it. I wanted the theme of the site to be red white and blue to show all that it is an American company located in the US.

Penny Auction Watch: Thanks Al! Is there anything else you’d like to tell us?

Al-Bidzville: Only that I will be glad to fulfill my bidders wishes and move to a more pricey level but at the same time I want to know that there is a market for that.

So although it may confuse some of my bidders, I do a lot of experimenting and will keep doing so until I find the right groove between my bidders and bidzville.com.

I really want to make it. I have the patience, I have the funds and I enjoy it. My wife has become my accountant because I never dreamed of the paperwork involved. I email my bidders constantly and know them better than most PA sites know their bidders I believe and will continue to treat my bidders more like friends than just plain bidders because that is just the way I am. I am a pharmacist and always had a good connection with my customers and still do. I think it spills over to the people who become my bidders.
Thanks Bidzville!

That’s why online pharmacies is becoming more pop over the last years. Well-known are remedies which are used to reduce inflammation caused by inflammation of the skeletal muscle etc. There were only few examples. Did somebody tell you about canadian generic Viagra? Maybe you along know about the matter. Sexual dysfunction can be a result of a physical condition. Even when it has a physical cause, psychological problems can make the disorder worse. Sex drive problems are so commonly a product of how you feel that there is something to that “headache” saying after all.