2nd Update 2/7: It appears BidWat has pulled the YouTube videos.

Update: Bidwat’s owner has posted videos responding to this post and apologizes for “shill” reviews, he requested that we post the videos here: 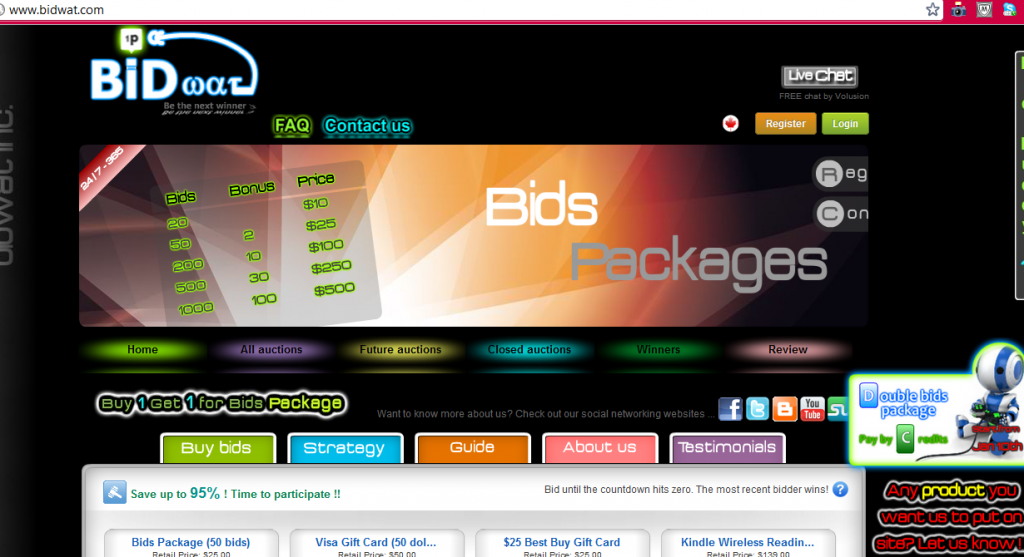 Recently penny auction site Bidwat.com inquired about advertising on this site, however, due diligence had to first be done before they could be allowed the opportunity to run ads here and sponsor the forum.

So, we did some watching and digging and surprise (ok, nothing in the penny auction industry surprises us by now) found that Bidwat had allegedly already found a way in on this site to promote themselves, by way of a forum member. This forum member shares the same IP address as BidWat.com is c10chen.

C10chen came on the scene when PAW members were asking questions, some were skeptical but felt at ease because of recognizing bidder usernames “This site LOOKS legit (I even recognize names that I know), but just seems too good to be true”

Take a look at the forum comments by c10chen:

Do they use an unpublished reserve system? I was looking through the closed auctions and there were quite a few that showed a bid price but then listed that it closed w/o a winner.

C10Chen said, “it seems to be normal, I won a PS3 by the price $1.37 and have alreay received it. But I cannot find my name in the winning auctions. It seems there is a bug. I have bought some other bids on the site and will do another review later on.”

“Umm- unsure about that one. All I found was “You may not register for more than one account. Persons that register more than one account are subject to immediate closure of all their accounts without warning and without refund of any bid credits or won auctions that have not been checked out.” But it doesn’t say anything about per household. Contact and ask would be my suggestion.”

I am waiting for the 500 bids package, that one is mine~~~hahaha” He’s even broke the forum rules.

“My name disappeared too and actually I won some auctions but it seems that these auctions are removed. I cannot find the auctions I have won. I emailed their customer service and they explained that after refunding all the bids to our bidders, the auctions related to these bids were removed automatically from their system. But since the full refund is ended, so they say no closing auctions will be removed from now on. en….. sounds make sense. Anyways, I think the customer service of the site is really fast.”

“Ok, I have exchanged several emails with Mr. Chen from BidWat.com and let me say that he has been both prompt and extremely helpful. He explained that they had a slight system glitch (error in the script) that had caused some of the problems I experienced and I am assuming relates to ones you all have explained. He assured me a that all bids would still be credited to users after the promo ending (within a few days). He fixed my win limit issue within about 2 minutes so I consider that a rare record response than I had received from many other PA’s.”

Notice c10chen’s comment following, “WoW, the owner of the site has the same name as mine. Do I have the chance to win the bids package? Could you kindly save your bids for future auctions and let me win it? please……….^-^”

“I think everybody who was there last week should have enough credits. Anyways, this site is not bad. But the only thing I think they need to change is the setting for “30 seconds” back, that is kind long and this will give too many chances to the “snipers”….. what do you say triggertre?”

“I have emailed them about this problem and they took my suggestion, the customer service was nice and said the time will be changed to 15 seconds from tomorrow, oh yeah…..”

So there you have it, yet again another penny auction site that signs up on our forum as a bidder of the site to post positive, fake reviews.

No BidWat, you may not advertise on Penny Auction Watch and you may not abuse our forum to cheat consumers for your own personal gain.

Discuss BidWat and all penny auction issues, tips and questions in our forum.

That’s why online pharmacies is becoming more popular over the last years. Well-known are remedies which are used to reduce inflammation caused by inflammation of the skeletal muscle etc. There were only few examples. Did somebody tell you about canadian generic Viagra? Maybe you already know about the matter. Sexual malfunction can be a result of a physical condition. Even when it has a physical reason, psychological problems can make the disorder worse. Sex drive problems are so commonly a product of how you feel that there is some to that “headache” saying after all.

Filed Under Legit or Not? Tagged With alleged shills, bidwat, bidwat.com, Canadá, chen, comments, ftc help, Penny Auction, qiang chen, scam, shill
About the author: Connect with me on Google+
3 comments… add one

Previous post: When Not to Bid on Penny Auctions