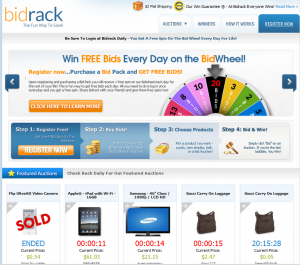 A few weeks ago we tested out the new Canada based penny auction site BidRack.com, by the same owners of sample sale site NoMoreRack.com. I thought I had won a top-dollar designer item only to find out that the site was running in undisclosed beta mode, back then they even showed a page of winners with testimonials. After it said I had won the item it changed to show another winner won, BidRack’s CS did not respond to my inquiry. Now, BidRack is open and they seem to have a lot of activity, both with items and bidders.

Today, we came across an interesting discrepancy and a definite red flag. 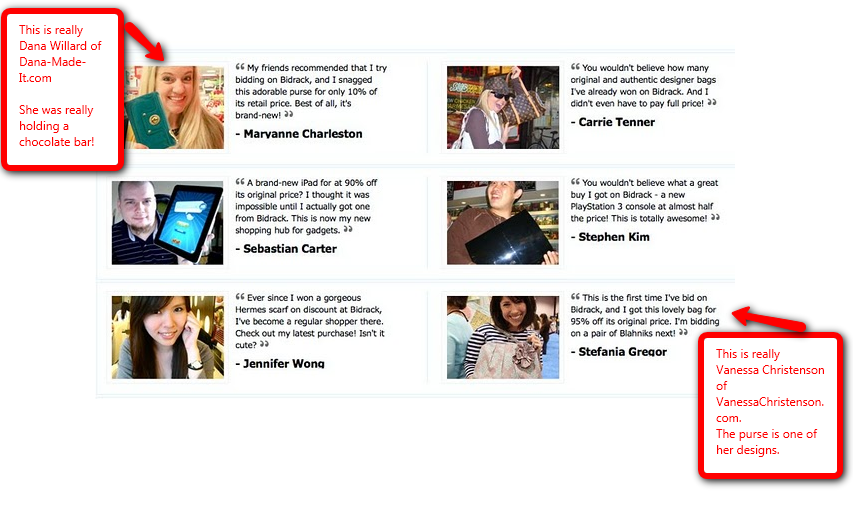 Dana Willard of Dana-Made-It.com and Vanessa Christenson of VanessaChristenson.com, both very creative ladies, recently found out that their photos were stolen by BidRack.com and placed on BidRack’s site to show “testimonials” of purported winners.

Maryanne: “My friends recommended that I try bidding on Bidrack, and I snagged this adorable purse for only 10% of the retail price. Best of all, it’s brand-new.”

This is the first time I’ve bid on Bidrack, and I got this lovely bag for 95% off its original price. I’m bidding on a pair of Blahniks next.” –Stefania Gregor

Dana says, in her blog, that the images were originally taken when the two hung out at the Quilt Market. BidRack appears to have photoshopped the images. In the original photo Vanessa was holding a Ghiradelli chocolate bar and not the wallet that BidRack shows her holding.

Neither Vanessa nor Dana had even heard of Bidrack until they found that their photos had been stolen by the penny auction site.

We agree with Vanessa, “but with all the fast paced and all the free internet information sharing there comes the overstepping of boundaries, calling something yours when it’s not.”

Vanessa also states that her own very own purse design, that she created and sells, was used in the edited photo of  her as Stefania. Vanessa updated the post to state that after they posted the article Bidrack.com pulled the testimonials.

This is not the first time we’ve found phony testimonials and regret to admit that his probably won’t be the last.

The top screenshot image was taken from Dana’s post http://www.dana-made-it.com/2011/02/if-only-our-names-were-maryanne-and.html

That’s why online pharmacies is becoming more popular over the last years. Well-known are remedies which are used to reduce inflammation caused by inflammation of the skeletal muscle etc. There were only few examples. Did somebody tell you about canadian generic Viagra? Maybe you already know about the problem. Sexual dysfunction can be a result of a physical condition. Even when it has a physical cause, psychological problems can make the disorder worse. Sex drive problems are so commonly a product of how you feel that there is something to that “headache” saying after all.