The 7thBid.com, launched in January of 2011 and provides gift cards on a unique penny auction format, they recently switched over to a timerless bidding format. 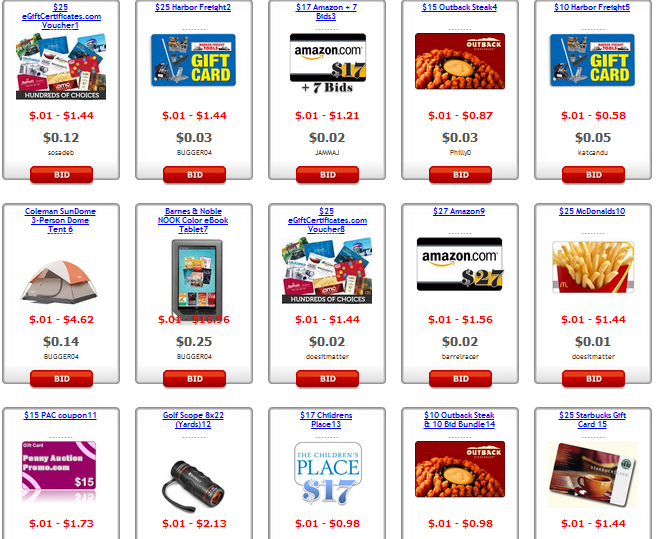 Read our interview with Rick at 7thBid.com to learn more:

7thBid:   We have had many online ventures, and being a penny auction enthusiast, it was the natural next step.

Penny Auction Watch: Do your auctions run on a schedule?

7thBid: Usually open for timed auctions from 8pm to 11pm EST    Our NO TIMER reserves run 24/7

Penny Auction Watch: How much are your bids?

7thBid: Starting at 75c and discounted by volume as low as 55c

Penny Auction Watch: What are your shipping costs?

US only at this time

Penny Auction Watch: Are there any win limits, limits /household?

7thBid:  2 per day, 8 per week and 21 per month on timed auctions.   Unlimited on NO TIMER reserves

Penny Auction Watch: Is there a story behind your  name/theme?

7thBid: EVERY 7thBid is free.   Every 7th Bid Bundle gets a bonus of double the bids..  and we love the number 7!

“We are a group of seven men with a common goal.   Our company Is called Seven Tents  LLC in Frankfort Ky…   Our company mission is to find a need and fill it.    We are currently on a mission to help pay down loans on local churches that have been hurt by this recession.   7thBid was an idea we had originally to start our first eConmerce site.   The number seven made sense and we wanted to make it unique so we started the 7th bid free concept.”-7thBid.com

Have you tried 7thBid’s timerless auctions? Tell us about your experiences! Join our forum.

Next post: The State of Georgia Shuts Down Wavee