Avoiding the Pitfalls of “False News” for Profit: How KingOfHowTo.com is Misleading Internet Users and Businesses

The following guest blog post was contributed to Penny Auction Watch by the penny auction site PennyGrab.com in a response to a blog article that is labeling their site and a number of penny auctions to be scams, yet fails to provide significant information or proof to back up the “scam” claims.

Over the past few months we’ve noticed that KingofHowto.com has been posting a number of articles about penny auctions, with the word “scam.” In my opinion KingofHowTo.com is a “MFA” made for Adsense site, writing about trending, popular articles to monetize on traffic, just my opinion. This is a concern for the penny auction space and the following article written for us by PennyGrab goes into the concern that they as well as other penny auction sites share.

In the modern world, it’s been said that a shouted lie can travel the globe 30 times before the truth has a chance to whisper.

Another idiom: “The problem with the internet is that it’s impossible to verify an opinion.” ~Abraham Lincoln

While we all love the internet, in ways it can betray the fruits of peoples hard labor. A person can be Ghandi, work hard, do the right thing with all of the right intentions… and one person can bring “them” down utilizing a false press release for nothing more than (hoping) to earn a profit as a pseudo journalist writing fake reviews and articles in hopes of making a few cents. This is also known in the legal world as libel. 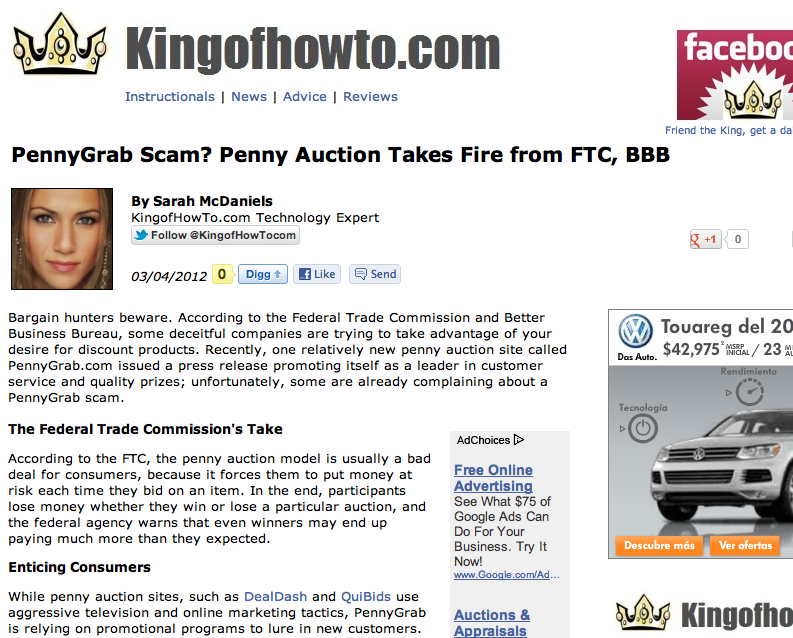 Recently, an article was posted on one such website [KingofHowTo.com]. A website that’s been in business for barely a year no less. This “article” was defamatory in nature while insinuating various businesses are fraudulent by the nature of the business they are in. This not only detrimental to the buying public buy distributing false information, in the guise of “news”, solely for the intent of profit… regardless of the veracity of the statements being made.

In the article I am expressly speaking of, an entire industry is lumped together, seemingly, as one entity in the opening paragraph by saying “…some deceitful companies are trying to take advantage of your desire…. one relatively new penny auction site called PennyGrab.com issued a press release promoting itself as a leader in customer service and quality prizes” and then goes on to state, without quote, without a verifiable source that some “people” are already beginning to complain about PennyGrab.com. 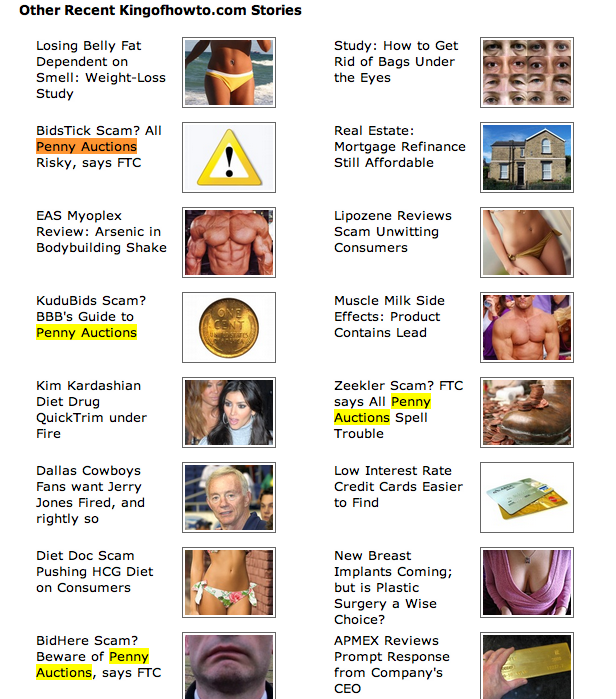 Let’s be absolutely clear: Not one time does the “author” (a term I am using as loosely as possible) state

“who” is making complaints, nor does “she” specify what a person or persons would be complaining about. She is simply making a blanket statement based on no proof, information or standing with which to make such a statement. In other words, it is a lie and libel. 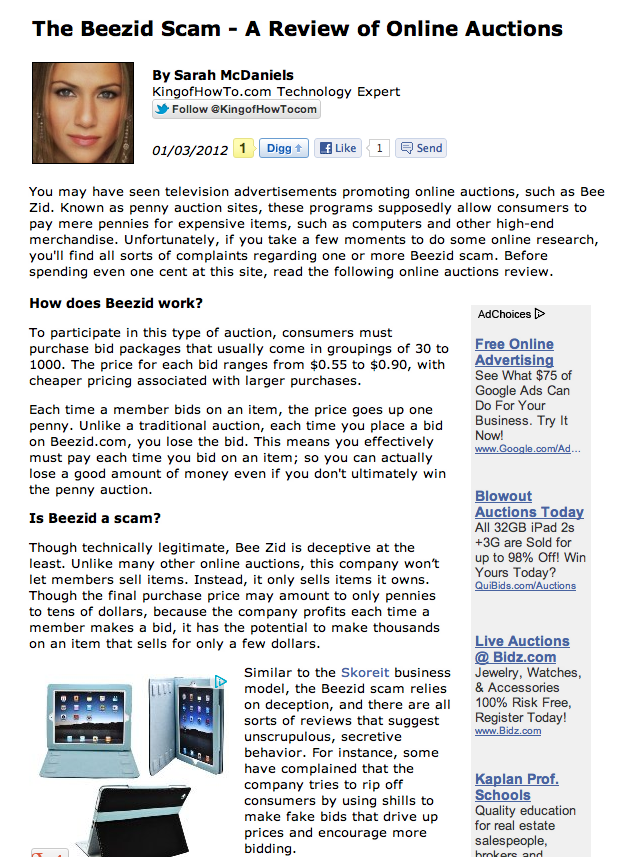 The article then goes on to state that while some of our competitors such as DealDash and QuiBids use TV ads and “online marketing tactics”, PennyGrab is using our newest way to earn “free Bonus Credits” as a way to “lure in” new customers, to a Penny Auction market “most” do not understand.

She actually used the term “less savvy” which we can only presume is “her” attempt at calling people “stupid”.

In fact, our Penny Punt [game] announcement was the PennyGrab way of letting our Members know that we’ll be giving “them” new and more ways to earn free bonus credits as well as informing them that there will be a lot more fun and innovative ways to win, earn Bonus Credits as well as just have some relaxing fun playing our video games.

While it is true that there have been many a scam website in the Penny Auction world, the author makes no attempt to be genuine in her writing, “fact checking” or accusations. As an example, she goes on to state that “Some have accused sites like PennyGrab.com of using automated bots to make fake bids”.

Who has? I dare say that PennyGrab, among the 4 leading Penny Auction websites, has the absolute BEST customer service record of anyone. So to make such a libelous statement, claiming that we’re cheating using bots or in ANY manner, without notation, quotes, names or even an example of an allegation. She then goes on to say that we’re not being “straightforward” with our customers.

Again, “who” have we not been straightforward with? In what manner? What is your evidence to libel PennyGrab in such a manner?

The author then goes on a tangent about the BBB (Better Business Bureau) stating that we’re not accredited with the BBB and that our “accreditation has been revoked” because we failed to honor our agreement.

What agreement, you may ask? Allow me to explain; The BBB is a COMPANY that is out to make money. Most do not know this, but the BBB is not a govt. entity of any type. They charge each and every business $600 per year to be able to reply, respond or address any complaints a person has made with a business on the BBB website. If your business does not “pay”, your business is simply marked with a ding… a negative report that the company has absolutely no control over nor can the company address.

I could literally go to BBB right now and complain that Ford Motor Company sold me a sick Zebra and refused to honor the warranty and if Ford isn’t a BBB Member, then Ford cannot respond to such an outrageous accusation. Yes, it really is this stupid!

Further down, the author then contends that we “only” have a C- rating on the BBB. If we’re “so great”, then how could our rating only b a C-? Looking at the BBB website, it states it’s because we’ve “BBB Accreditation was revoked because business failed to honor its accreditation agreement with BBB” which is the BBB’s attempt at bullying us (and millions of other small business owners) into paying their $600/yr extortion fee by stating that we’ve not honored our agreement.

As a matter of fact, the BBB then goes on to say that: No complaints filed with BBB. The BBB has sufficient background information on this business.

Does this sound like a scam? No complaints & they have sufficient background information on Pennygrab; The BBB is only upset that we’ve not paid them a “play nice” fee of $600.

Don’t take my word for it, here’s the link so you can see for yourself:
http://www.la.bbb.org/business-reviews/Internet-Auction-Service/Pennygrab-Inc-in-Huntington-Beach-CA-100106934

In a nutshell, we all here at PennyGrab work very hard in not only running a company, but in ensuring our Members are happy, treated fairly? but more importantly, we strive day in and day out to “do the right thing” for each and every person; be they a Member or not. Our Members can speak for themselves and in the satisfaction they get being a part of the PennyGrab.com team.

You can always ask them directly by joining our chat room that is available to anyone, whether they are an active, paying member with us or not.” 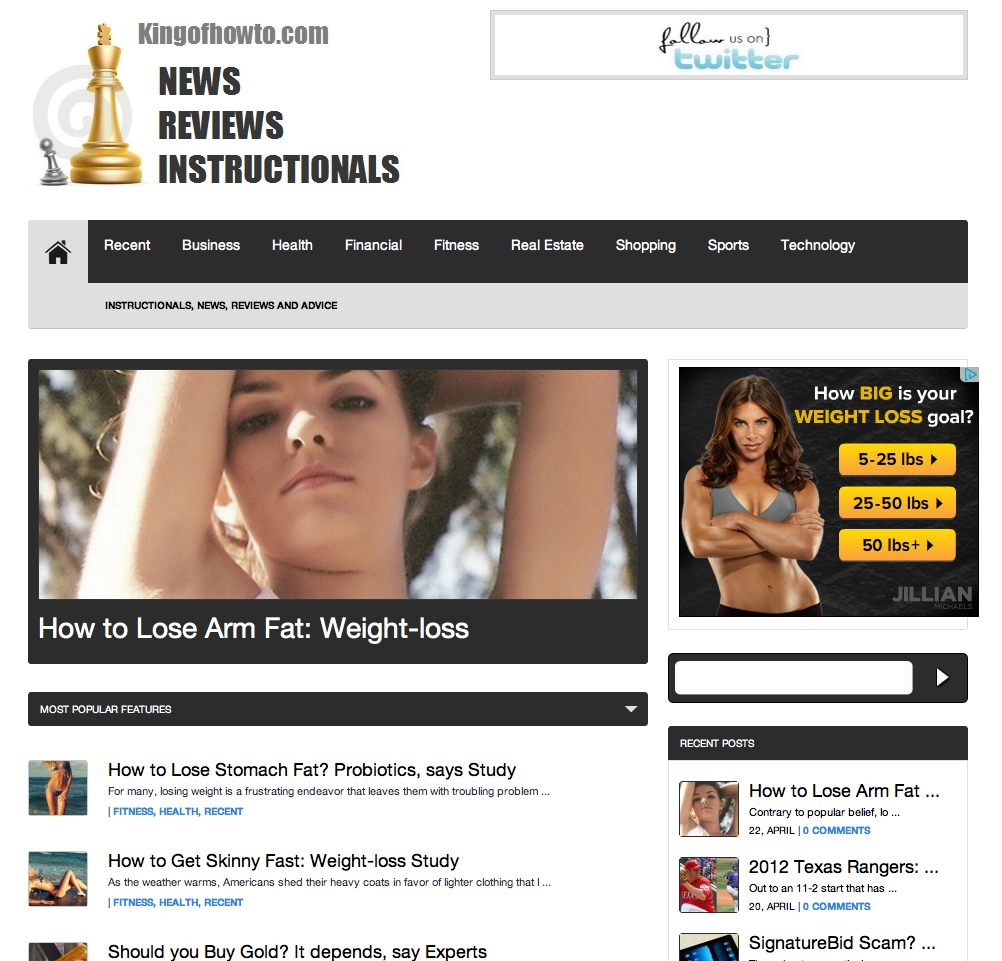 Discuss and review PennyGrab in our forum.

That’s why online pharmacies is becoming more popular over the last years. Well-known are remedies which are used to reduce inflammation caused by inflammation of the skeletal muscle etc. There were only few examples. Did somebody tell you about canadian generic Viagra? Maybe you already know about the matter. Sexual malfunction can be a result of a physical condition. Even when it has a physical why, psychological problems can make the disorder worse. Sex drive problems are so commonly a product of how you feel that there is some to that “headache” saying after all.

Next post: The Item Gets Better As You Bid With Beezid’s Brand New Balloon Auctions