Interview with Founder of Just Launched in the US Penny Auction MinusAuction.com

This afternoon I had the pleasure of speaking with and interviewing David Schmidt, the US founder of the brand new penny auction site MinusAuction.com, based out of Baltimore, Maryland.

Amanda – PennyAuctionWatch: When did you launch?

David of MinusAuction:  We launched here in the US about 10 days ago, but we officially launched in Europe around late November of 2010 [Minus-Auction.com]. We’re still running overseas right now and have done really well in Europe. Each one of our auctions is individually run and operated in each country. We started out in Norway, have auctions running throughout Scandinavia and have big plans for around the world. Mexico, a few South American countries, the Netherlands and again in the UK. 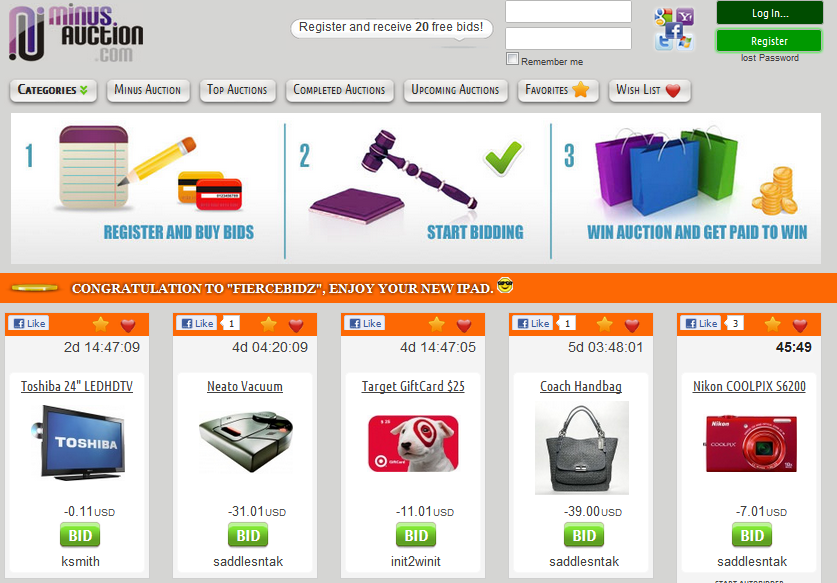 Amanda: I noticed that your auctions really are “minus” auctions. What got you interested in launching a different kind of penny auction?

David: The original founder/inventor of the Minus Auction system was really involved in eBay and the classic online auction, and he began to play around with a few different formulas that could work out for a new kind of auction.

eBay is a trusted auction site and we wanted to institute that level of trust, wanted to bring in a higher level of customer service that a lot of the penny auctions are lacking in.

We wanted to provide users with a system that they can trust, focusing on transparency and making sure we described how MinusAuction.com worked in the most simplistic way as possible. Show them that yes you can get a great deal, you may have to spend a great deal of money to win things, that’s how it works, but want them to know that we are interested in making all of our users happy no matter how their experience has been in the past and let them know that they can have a good experience with us.

We’re not limiting the interaction by just email or chat, they can actually call and talk to us  [(410) 929-7778]. It’s no secret that we won’t have issues as we just launched here. We’re still working on ironing out some server bugs and glitches, but we want customers to feel that they can reach out to us. 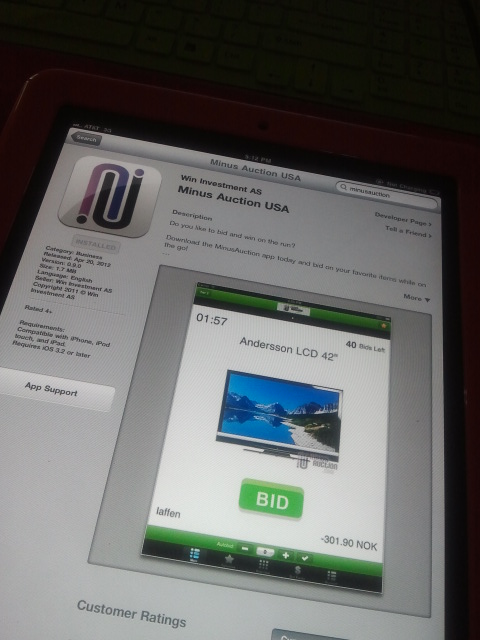 PAW: I noticed that MinusAuction has a mobile app, can you tell us about it?

David: Last week we launched our mobile application, not many penny auction sites have their own apps.

Apple was excited to help us get the application pushed through. It’s totally free for the iPhone/iPad and iPod Toand in the app store under Penny Auction Apps – [Seach MinusAuction].

For the most part people seem to be happy with our app. You can place your bids and autobids with it.

We’re tweaking our system to benefit our users. We’ve had great success in Europe and are depending on customer feedback.

We’re starting out slow. We have no interest in making a quick buck and have hopes of staying in the US and becoming one of the best penny auction sites.

We have a provisional patent for our minus auction format and for our backend administration panel.

We feel the most important thing about our system is the patentability and no one can duplicate it!

PAW: MinusAuction isn’t actually the very first penny auction to instead of increase in price but decrease, BidBlink.com (now defunct)  offered this feature. What is different?

David: The difference between what we offer and what  BidBlink had is we not only go into the negative, but everyone contributes together towards the grand total.

For example, you can literally place a bid on an item one time, and no matter who wins the item is paid for by the bidding community.

The last person that bids, the winner, could have literally placed just one bid, $0.30/$0.60/$1, whatever their bids cost, that’s all they spend.

Everyone pays the same denomination for bids in varying bid packs, so a lot of bids are introduced to the auction, a large community of bidders, so you only spend what you place.

There are no final end prices, the only costs to bidders are bid costs, shipping and handling.

The icing on the cake, that’s the most exciting thing about the whole system is that we list a set retail price for an item, what it sells for in the store. So once the bidding reaches -$400 on a $400 item, anything after that is just extra and it goes back to the winner.  So let’s say it goes $10 extra -$410, the remainder $10 gets back to the winner as a gift card. So, if you’re the winner of the item that ended at -$410, you win the item for however many bids you place, and the extra $10 will be awarded to you in the form of a gift card.

Amanda: How many items would you say you’re running per day right now?

David: We always have at least 10 items up each day.

Amanda: Have you shipped out any items in the US yet?

David: Just recently we did about 3-4 of these vacuum cleaners, over the weekend we had a regular user win an iPad for $-1.00.

Today we had a user win a Garmin GPS for -$1.00. Each bid will decrease the auction value at varying intervals of -0.01, $0.10, etc. USD, the increments are stated in the item description.

Amanda: What is your timeframe for shipping?

David: Shipping on the site we say 7-10 days, but our turnaround if we don’t do direct dropshipping, in house is usually faster. On Saturday someone won an ipad it shipped today, we don’t ever wait that long.

Amanda: Your site interface/design is really nice looking and unique!

David: Simplicity and aesthetics, we really want the user to have the best experience. By far the most beautiful thing about it is the fact that it’s patent-able, and we’re very excited about the mobile app. We look forward to hearing feedback about the site from Penny Auction Watch readers.

Thank you David and MinusAuction.com for telling us more about your new penny auction site!

There are currently no win limits and the auto bidder function is available for use on all of the items.

“MinusAuction is an affiliate of Win Investments AS. MinusAuction has auction sites in various countries; there are no auctions shared between countries. Bid credits purchased in one country are not valid in another.”-MinusAuction.com Terms and Conditions.

Have questions? Want to read and post reviews? Discuss MinusAuction.com in the MinusAuction forum thread in the Penny Auction Watch Forum!

Disclosure: Link to MinusAuction is a referral link. If you decide to bid on MinusAuction be sure to do your research and observe the auctions first on this and all penny auction sites.

That’s why online pharmacies is becoming more pops over the last years. Well-known are remedies which are used to reduce inflammation caused by inflammation of the skeletal muscle etc. There were only few examples. Did somebody tell you about canadian generic Viagra? Maybe you yet know about the question. Sexual disfunction can be a result of a physical condition. Even when it has a physical why, psychological problems can make the disorder worse. Sex drive problems are so commonly a product of how you feel that there is slightly to that “headache” saying after all.

Next post: CritterBidz.com is Penny Auction Just for Pet Supplies