Fun Beyond Bids and Wins: Gamification Elements in Penny Auctions 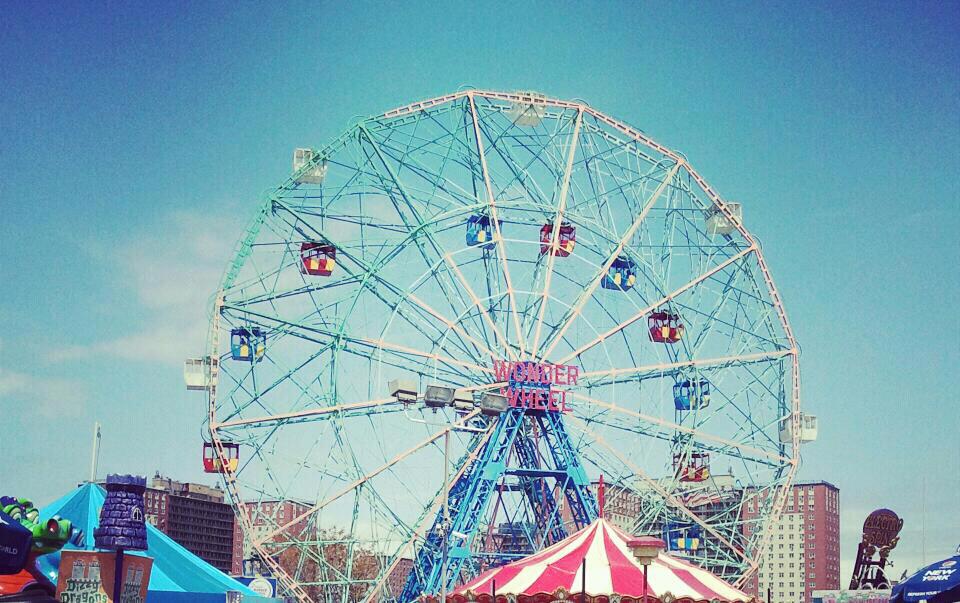 The following guest article was written by Anthony Gonch of SoftMedia.biz exclusively for Penny Auction Watch and provides insights into enhancing the penny auction user experience with gamnification. This article is geared towards penny auction site entrepreneurs.

I’m extremely happy to be back on the pages of PAW. What I wanted to try was here was to elaborate on a response to a terrific article published here earlier by Jeremiah titled “Where Has the Fun Gone from Penny Auctions?”

It was still April when I read it, first on the forum and later on the front page of the blog. The message clear and sharp, cutting deep, revealing what was once the penny auction mentality.  It spoke to something a lot of us felt by pure instinct no doubt but a certain air on nostalgia driven fatalism left me uneasy after reading the piece.

I remember a while back when I had the pleasure of interviewing Amanda we briefly talked about how the introduction of gamification elements and games can take some pressure of the penny auction community and the next big step for penny auctions in general. Some innovative penny auctions are already taking the first steps, Quibids game center, Beezid’s balloon auctions, and new formats like that of SquareMarket.com  all feel like the steps in the right direction.

I strongly believe that gamafied platforms will begin to dominate the penny auction scene relatively soon. More thought should be put in making penny auctions fun, easy to use, and diverse so that users could feel welcomed and accomplished on a site even if today they are not in the mood to bid.

With help from my colleagues at www.softmedia.biz we tried to come up with a descriptive inside view on the gamification process: how and why it works, what can be done, what should be avoided and some examples to top things off.

“Game mechanics are rule based systems ( or simulations) that facilitate and encourage a user to explore and learn the properties of their possibility space through the use of feedback mechanisms”. (A Theory of Fun for Game Design

Gamification is a technique of designing and implementing certain game mechanics in to a non-game activity or environment (website, e-commerce, penny auction) via gamification of your penny auction you can increase levels of engagement and loyalty of your customers, not to mention a chance to make the whole thing more fun.

There’s a basic psychological principal that Gamification relays on – the benefit of positive reinforcement for each interaction. The world has become overly pragmatic; it’s naïve for anybody to do anything without expecting something in return.

When put to practice Gamification can either provide an additional stimulus for a weak existing incentive or create a new one. As result when executed properly users will experience an emotional lift, every time they finish an objection, add a new reword to their collection, creating an emotional attachment with a penny auction.

Why player feedback is important

To avoid confusion I’d like to point out that when talking about game mechanics feedback as a slightly modified meaning:
“Feedback: It tells users that their intended action was registered. It provides a cue as to how the system may respond”

This might be a point where emotions might mix but it’s important to understand that Gamification has a lot of potential as a channel to influence users behavior through feedback, and it should be noted that influence is not always a bad thing, essentially any form of user experience design is an attempt to influence users to interact with a product / site in a certain way for their own benefit.

Gamnifying content and content delivery can give players a push in the right direction (guide them to where the most action is at) and offer them some sort of challenge or reword for participation.

The role of feedback in this process is essential as it lets users know that their action was noted and registered and they can await an appropriate response.

If you leave your users without a feedback system they will have an extremely hard time figuring out whether or not they are getting closer to their goal or anywhere else for that matter. It can be as awkward as talking to someone who’s not noticing your even there.
With penny auctions one of the most important aspects of feedback is pacing:

And let’s be honest when a single auction can drag on for several hours and the only end-content feedback is you are either a winner or a loser (when talking about the all classic penny auction experience), some diversity to living up the pace is definitely a good idea.
Feedback tells the users what they’ve done and acts as a motivator to continue exploring new actions and opportunities.

Ideally the goal of designing a user experience is creating a flow from series of engaging actions and feedbacks.

The Flow Theory was something Mihály Csíkszentmihályi, a Hungarian psychology professor first proposed somewhere in the 1960s. The theory stated that “in the state of “Flow”, the emotions are not just contained and channeled, but positive, energized and aligned with the task at hand.”
Or in other words a deep focus on the activity at hand and nothing else —not even oneself or one’s emotions.
Csíkszentmihályi identifies ten factors of flow.

And luckily for game designers and gamification marketers not all these criteria are required to be met at the same time for the state of “flow” to accrue.

Loyalty programs should be concerned with valued actions and equally valued rewords. The goal is to create a layer of motivation that will result in an actual benefit to the user to choose your brand over a competing brand given that all offers are equal.

Missions are sequences of simple related activities that result in a combined greater accomplishment.  Missions are among the hardest aspects to execute successfully in a gaming project as they require a
deeper engagement from the user.

But the same time missions take full advantage of the whole in-game economy and ecosystem creating scale and levels of accomplishment in order to continually provide rewards and motivation for the user.

Goals are simpler, and I suppose can be looked at as building blocks for missions they provide user with a clear picture of his possible objections and the expected reword for completing them.

Pacing and balanced are extremely important when designing your missions and goals.

Squiddo has a great mission like chains of actions that push you to deeper engage with the whole service and its options to get an additional perk unlocked.

A system of collectable achievements, badges or trophies can be used to show the user’s progress. If you allow users to set up a virtual avatar the sum of their collection can illustrate how well established and recognized are they within the ecosystem of your site.

Users’ progress is also often shown in relation to other users. This is usually accomplished via some type of leader board. This helps provide social incentives for continued progress by intrinsically motivating users to become superior to their peer users based on the raw fact that people enjoy competing with one another.

A good example is the Frequent flyer miles as it’s attached to a real world initiative to complete goals and progress metrics.

A simple example would be hide certain badges or rewords on special pages that contain important and engaging information.

Like most things, simply tacking on gamification is poor execution and leads to poor results

Recently we introduced the reword shop module to our clients. It’s a fairly simple thing but in terms of Loyalty Programs it’s a great example. Players get awarded bonus points for every bid they place on your website. Later they can exchange those points for special gifts in prizes it’s a fairly simple idea but a nice way to let the players know all their efforts in bidding are accounted for and valued.

Buy now with Discount is another great example of a loyalty building program, and you can even get creative if you like, award discounts points for little challenges that you set for your users, be it tweeting or login in several days in a row.

Quibids takes a more direct approach with their feature but it’s still a great feature to look out for.

SkoreIt used to offer a similar feature as well but as far as I know they decided to turn it down. 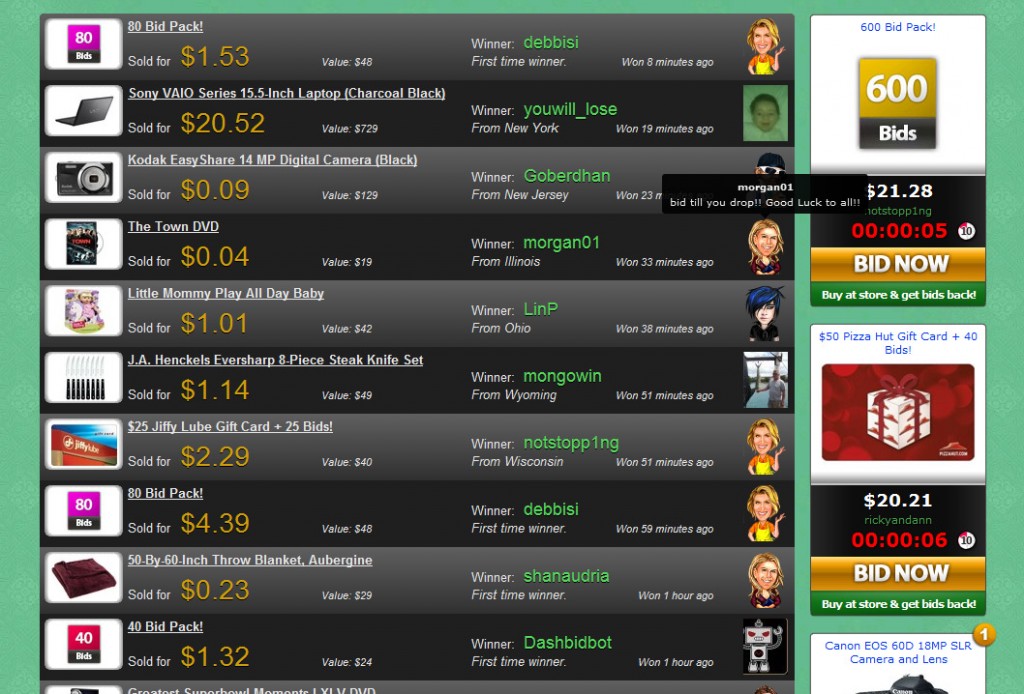 A fairly simple thing like a personal avatar is a good first step to give your users a place to grow their personality.  When displayed on a leader board or any other section of the website they see themselves as clearly distinguished from the rest of the players. The next thing would be to add additional layers  of personalization by introducing achievements, and collectable badges. 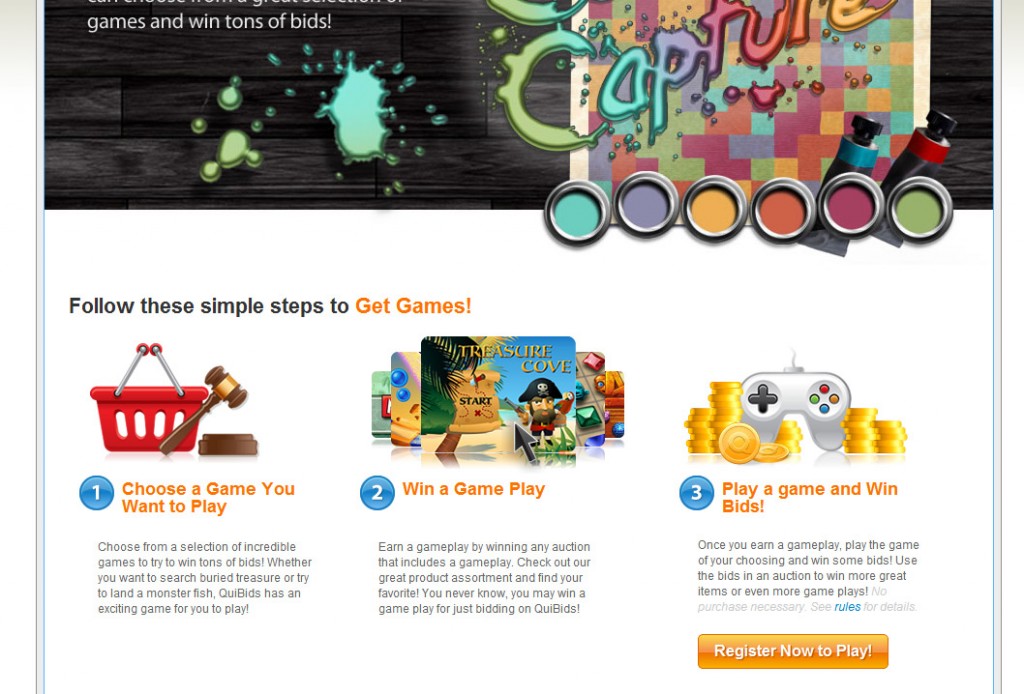 Quibids allows bidders to win gameplay coupons that open up new areas of the site, setting up a set goal -> reword relationship

Another approach is to make games available at all times and work them in to the virtual economy of your website, add diversity so that depending on the mood users can find something to do on your site. Games can provide a great chance for users to get themselves noted, and occupy top score boards even if auction bidding was slow for them for one reason or another.

The addition of actual games to the penny auction is a great leap forwarded but I’m afraid I’ll get to carried away so perhaps next time. 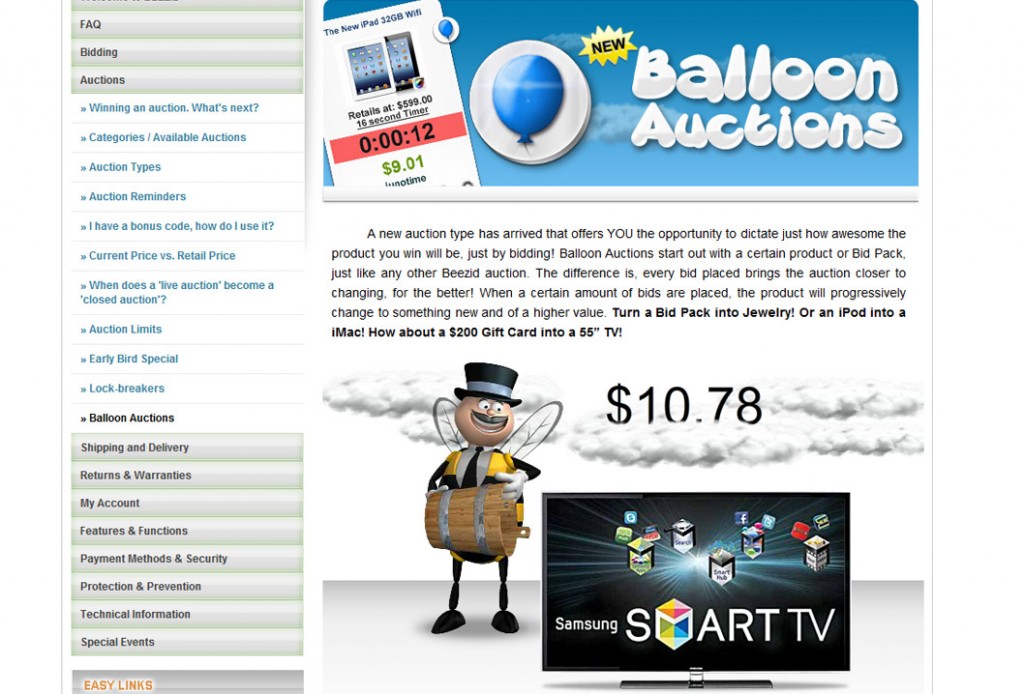 It’s simple objective based stimulus, every time bidders reach a certain check point the reword gets bigger, in addition the curiosity of users wishing to find out what’s behind the next check point is a great motivator + a channel of almost imitated feedback. But in terms of mission building there is still a lot of work to be done.

Discuss gamnification of penny auctions with us in the penny auction business forum of the Penny Auction Watch Forum.

Disclosure: Some links are affiliate links and if purchases are made after clicking on the links we may receive a commission.

That’s why online pharmacies is becoming more pops over the last years. Well-known are remedies which are used to reduce inflammation caused by inflammation of the skeletal muscle etc. There were only few examples. Did somebody tell you about canadian generic Viagra? Maybe you yet know about the matter. Sexual disfunction can be a result of a physical condition. Even when it has a physical cause, psychological problems can make the disorder worse. Sex drive problems are so commonly a product of how you feel that there is something to that “headache” saying after all.

Previous post: Bidrivals Update: Files for Dissolution, to be Back Soon Under New Ownership