What’s a Bitcoin you ask? Maybe you already know, but for those of you who haven’t heard of them before, or have just don’t really get what they are (don’t worry, I had to look it up myself), a Bitcoin is a form of “digital currency.” Bitcoin transactions are secured on special servers called “Bitcoin minors.”
Apparently, “Bitcoin is accepted in trade by merchants and individuals in many parts of the world. Similar to other currencies, illicit drug and gambling transactions constitute some of its commercial usage Although Bitcoin is promoted as a digital currency, many commentators have criticized Bitcoin’s volatile exchange rate, relatively inflexible supply, and minimal use in trade. (Wikipedia).”
RideTheBubble.com is the very first penny auction to offer Bitcoins… they offer other items too, like $10-$150 gift cards, iPads, Samsung Galaxy Tab, but is it a legit penny auction?
We know that the script their using, has, in the past, provided a very easy option for a site operator to employ bidding bots – and well I’d suggest you watch the site and try it out for yourself to see what you think, but there seems to be high bidding activity and I just watched all 5 items on the same line get bid on simultaneously… 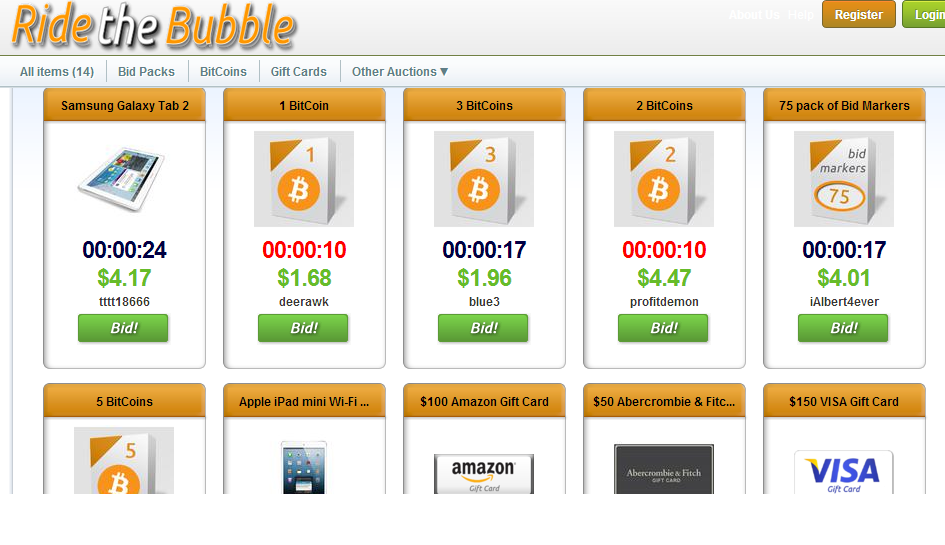 RidetheBubble’s founder wrote us, ” We set ourselves apart by offering VIP concierge service to each and every one of our players from all 24 countries the call home.  We respond quickly, and do everything in our ability to empower our members.”
What do you think of RidetheBubble? Tell us about your bidding experiences if you’ve bid there, and don’t forget to check out and join our forum!

Filed Under Legit or Not? Tagged With bitcoins, legit or scam, Penny Auction, ridethebubble
About the author: Connect with me on Google+
3 comments… add one

Previous post: PennyGameAuctions is Penny Auction for Board Games